Irish airline’s order with $9.4B list value gives Boeing a lift by Compiled by Democrat-Gazette Staff From Wire Reports | December 4, 2020 at 1:52 a.m. 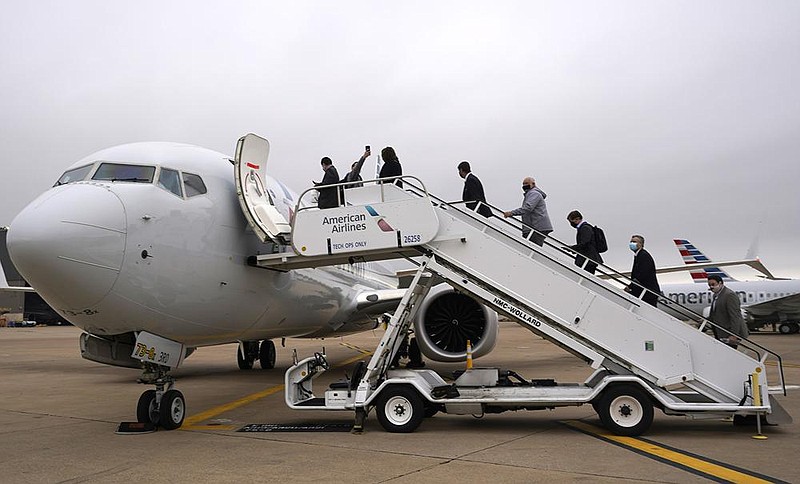 Passengers board an American Airlines Boeing 737 Max jet before departing from Dallas Fort Worth airport in Grapevine, Texas, on Wednesday as the airline prepares to return the Max jets to service. (AP/LM Otero)

Irish budget airline Ryanair said Thursday it is ordering 75 more Boeing 737 Max jets, a boost for Boeing just before its most important plane returns to flying after two deadly crashes.

The order has a list value of $9.4 billion before significant discounts that are customary for plane purchases.

The deal gives the embattled Max a seal of approval from Europe's most valuable airline as Boeing attempts to restore global confidence in the workhorse jetliner.

The announcement was a huge lift for Chicago-based Boeing, which has suffered canceled orders for the plane since it was grounded nearly 21 months ago and while demand for new jets plummeted because of the coronavirus pandemic.

[Video not showing up above? Click here to watch » https://www.youtube.com/watch?v=A2zEp6BID7A]

So far this year, customers have canceled orders for 448 Max jets and Boeing has raised doubts about another 782 orders because of the airlines' pandemic-weakened financial health. The company has reported only five Max orders in 2020.

Boeing Chief Executive Officer David Calhoun said he was confident that the Ryanair move was the beginning of the company's bid to rebuild its Max order book.

"We have had one rough year," Calhoun said. "This is a story of faith. Belief and faith in the future of our industry." He pledged to "continue the work to re-earn the trust of all of our customers."

Airlines usually get deep discounts off list prices for planes. Calhoun dismissed the idea that Boeing may be under more pressure to cut prices because of a pandemic that is causing huge losses at its airline customers and the Max's own troubled past. The company is trying to resell planes covered by previous deals that were later canceled.

"We don't feel a need to discount our way into the marketplace," he said.

Calhoun added that he's "very proud" of how the company responded to the combination of the Max crisis and the covid-19 pandemic, which forced cuts that will peel away about a third of its workforce. Boeing will emerge "leaner, faster, better, smarter and most important, safer," he pledged.

The additional jets position Ryanair to expand in coming years as travel rebounds from a collapse caused by the coronavirus pandemic, and financially weaker competitors nurse their balance sheets back to health.

The new deal would push Ryanair's total orders for the Max to 210 planes. CEO Michael O'Leary said that with the additional 75 planes, Max jets will make up one-third of Ryanair's fleet in five years, up from 6% now.

O'Leary said the planes offer lower fuel consumption and quieter flying than other aircraft. He expressed confidence that travel will recover next year as virus vaccines become widely available and that customers will get back on the Max.

"The one issue that's going to come up here today is safety, so let's let it out front," O'Leary said on a call with reporters. "This is the most scrutinized, most audited aircraft in history. It's also going to be one of the safest."

Max jets were grounded worldwide in March 2019 after crashes in Indonesia and Ethiopia just five months apart killed a total of 346 people. Last month the U.S. Federal Aviation Administration and regulators in Europe cleared the way for the plane's return by prescribing new flight-control software and other changes.

With its previously bestselling plane grounded, Boeing has lost $3.5 billion so far this year and announced deep jobs cuts to reduce costs. Boeing expects the pandemics to cast a pall over demand for airline jets for several years.

Information for this article was contributed by David Koenig of The Associated Press and by Julie Johnsson and Siddharth Philip of Bloomberg News.