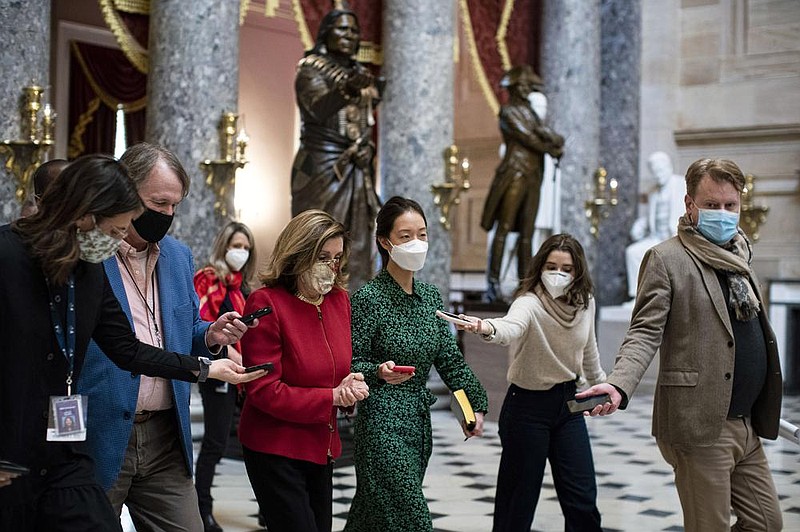 Reporters surround House Speaker Nancy Pelosi (third from left) as she walks to her office Thursday on Capitol Hill. She and Senate Majority Leader Mitch McConnell held their first talks since the Nov. 3 election as support grew for a bipartisan coronavirus relief bill. (The New York Times/Al Drago)

WASHINGTON -- Senate Majority Leader Mitch McConnell and House Speaker Nancy Pelosi spoke Thursday as momentum grew for a targeted coronavirus-relief deal, illustrating how Congress has snapped into action during a surge in new cases and deaths.

Frequent rivals but also proven deal-makers, the pair also discussed reaching a deal on a spending bill to avert a government shutdown next Friday.

"We had a good conversation," McConnell, R-Ky., said after his discussion with Pelosi, D-Calif. "I think we're both interested in getting an outcome, both on the [spending bill] and on a coronavirus package."

The talks -- their first since the election -- came shortly after a growing number of lawmakers have rallied behind a $908 billion bipartisan spending bill that would aim to buttress parts of the economy over the next several months. It's a number that many Republicans, McConnell included, signaled they were willing to accept this summer.

While some of the optimistic lawmakers stopped short of endorsing every part of the proposal, many said the offer was solid enough that it should be used as the basis for negotiations, a sentiment that Pelosi and Senate Minority Leader Charles Schumer, D-N.Y., expressed Wednesday.

The measure is more than what Senate Republicans had originally offered and less than what House Democrats had wanted, but it is designed to try and provide immediate relief to some parts of the economy as the pandemic enters a dangerous and increasingly deadly phase.

Graham said he's "never been more hopeful that we'll get a bill ... the $908 billion bill, that's the one I support." He said it "will really help people," and that he had talked to President Donald Trump about the measure "extensively."

Pelosi and Schumer on Wednesday called the bipartisan offer an appropriate basis for stimulus negotiations, a significant retreat from their previous demands for a much larger package. President-elect Joe Biden has also urged lawmakers to come together on an interim deal during the lame-duck session of Congress, and he has endorsed the $908 billion framework.

Biden wants an aid package that's as large as possible now, with more aid to come next year. He said Wednesday that a package developed by moderates "wouldn't be the answer, but it would be the immediate help for a lot of things."

Trump on Thursday also backed quick approval of a stimulus package. "I think they are getting very close, and I want it to happen," the president said.

Any relief package would be attached to a $1.4 trillion year-end spending bill required to avert a government shutdown. Talks on that measure are proceeding, but if lawmakers should stumble, a temporary spending bill would be needed as a bridge into next year.

On Thursday, Ernst and Cornyn expressed measured support for the developing talks. Ernst, a member of the Senate Republican leadership team, did not dismiss the viability of the $908 billion framework despite expressing concerns about some of its policy provisions. Cornyn also said senior Democrats' embrace of the bipartisan plan "represents progress."

"I think it's moving in the right direction," Cornyn said, adding that he remained concerned about the structure of state and local funding.

Grassley, chairman of the Senate finance committee, also signaled he'd be willing to accept the bipartisan framework if the details are right. "It's a little high for me, but more important for me are the things that are in it. And if everything in it has bipartisan support ... the figure might not be the biggest thing," he said.

Cramer, an ally of the president's, also sounded a positive note: "I like the effort. It strikes the right balance of compromise, and it's a number that's doable."

Although there has been a sudden burst of bipartisan momentum for the package since Tuesday, it remains an incomplete proposal that has not been drafted as a piece of legislation yet. The path forward is cluttered with obstacles, including a tight time frame and hard feelings from months of futile talks and a poisonous election.

Still, the rapid mobilization of support shows how lawmakers from both parties are trying to come up with a compromise quickly after months of inaction.

Coronavirus cases are surging across the U.S., and concerns have intensified about the potential economic fallout. Congress also faces a series of rapidly approaching economic deadlines, with aid programs for jobless Americans and renters set to expire before the end of the year.

With talks between congressional leaders stalled for months, a bipartisan group led by Sen. Joe Manchin, D-W.Va., unveiled the compromise measure Tuesday aimed at restarting negotiations. The plan would devote close to $300 billion in another round of small-business aid and $160 billion for state and local governments; fund federal unemployment benefits at $300 per week; and devote tens of billions of dollars to other priorities, such as child care, hunger and vaccine distribution.

It also includes a temporary liability shield to insulate companies, universities and other entities from coronavirus-related lawsuits, a measure Democrats strongly oppose, although lawmakers were still hashing out details of that policy and others. The bipartisan proposal would not, however, include a new round of stimulus checks.

In a floor speech Thursday, McConnell did not reveal his position on the bipartisan framework, but called for lawmakers to swiftly approve additional economic aid. McConnell on Wednesday circulated a separate plan that broke sharply with key Democratic priorities and proposed no additional spending on supplemental federal unemployment benefits.

"Compromise is within reach. We know where we agree. We can do this," McConnell said.

"Why should these impactful and noncontroversial life preservers be delayed one second longer?" McConnell said. "At long last, let's do what Congress does when we want an outcome. Let's make law on all the subjects where we agree."

Pelosi expressed optimism that a spending deal could be reached by next Friday: "We'll have an agreement. I don't know when."

McConnell has not said whether he would put the Manchin-led plan up for a vote, but he faces pressure from conservatives in his rank to pull the legislation to the right. Conservative senators have already objected to the plan's proposal for state and local aid, although the framework calls for far less than Democrats have sought.

Sens. Mark Warner, D-Va.; Susan Collins, R-Maine; Mitt Romney, R-Utah; and Lisa Murkowski, R-Alaska, are among the leaders behind the bipartisan effort. Not all lawmakers are moving in support of the measure, though.

"I'm very disappointed that a proposal from some of my colleagues today apparently includes provisions that spends hundreds of billions of dollars in taxpayer money to bail out wasteful states," Sen. Rick Scott, R-Fla., said in a statement about the bipartisan proposal.

Ernst told reporters that she would be willing to accept some form of aid for state and local governments, albeit with guardrails to ensure funding is targeted for covid-related needs. She also expressed concern about language in the measure related to insulating companies from covid-related lawsuits.

"We've got a long ways to go, but I would like to see something by the end of the year," Ernst said.

In a floor speech Thursday, Schumer reiterated that he believes an agreement centered on it could be in reach.

"We are already much closer to an agreement because of the bipartisan talks these eight senators have done," Schumer said. "And we can build off their momentum. What's the alternative?"

​​​​​Information for this article was contributed by Jeff Stein, Mike DeBonis and Seung Min Kim of The Washington Post; and by Andrew Taylor of The Associated Press. 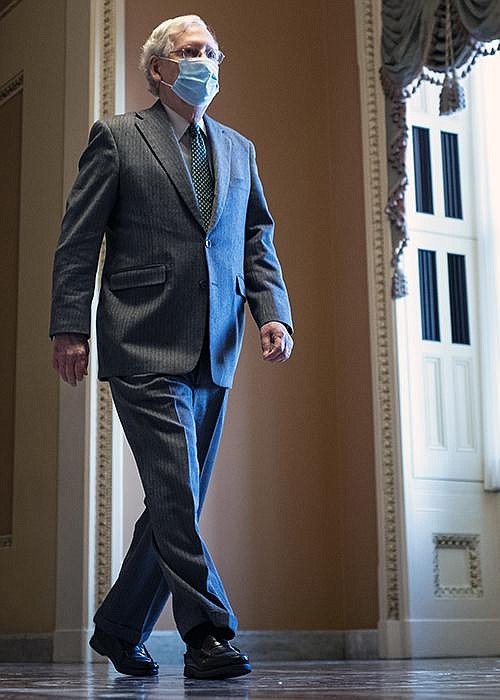 Senate Majority Leader Mitch McConnell walks to the Senate floor Thursday. “Compromise is within reach. We know where we agree. We can do this,” McConnell said without disclosing his position on a bipartisan relief bill. (The New York Times/Al Drago)
ADVERTISEMENT