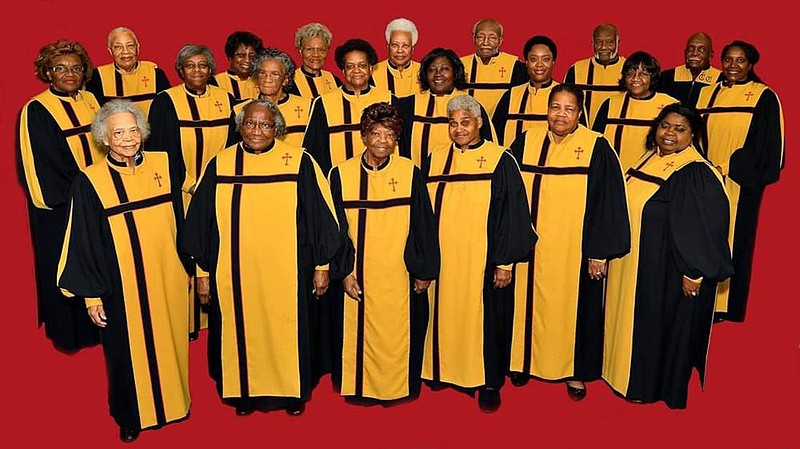 The Cosmopolitan Choir of Pine Bluff has been singing since 1970. In 2020, the group is observing its golden anniversary. (Special to The Commercial)

This year, the Cosmopolitan Choir of Pine Bluff is celebrating its 50th anniversary.

Although the choir couldn't host its annual choir program because of the covid-19 pandemic, members are still observing a half-century of service to the city of Pine Bluff, the state of Arkansas and the region, according to a spokesman.

"The choir sings a repertoire of hymns, anthems, spirituals and gospels with a unique quality that afforded the members its longevity," according to a news release.

The choir began Aug. 28, 1970, under the leadership of David Hodge Jr., as a small group of music-loving Christians from various churches, denominations and occupations assembled at Damascus Missionary Baptist Church at Pine Bluff.

"This assembly of dedicated Christians became known as the Community Choir, later named the Cosmopolitan Choir. The mission of the choir was to bring into fellowship those who enjoy worshipful singing to God, spreading the gospel of Jesus in song, and willing to give of their time and talent to community service," according to a news release.

The choir has sung for the State Congress of Christian Education of the Regular Arkansas Missionary Baptist Convention Inc. In 1981, the choir participated in Art Porter's Christmas television special-Minor Key on Educational Channel 2. In 1989, the choir appeared on the ACTS Channel 11 from the auditorium of the Immanuel Baptist Church at Pine Bluff.

The choir also appeared with two well-known artists, Vernard Johnson, a saxophonist, and Clifton Davis, who starred in TV shows "That's My Momma," "Amen" and other programs. These performances were presented in the Hathaway-Howard Fine Arts Building at the University of Arkansas at Pine Bluff.

Christmas and Easter have been occasions for the presentation of inspiring and effective cantatas and other sacred musical offerings. In January 1995 as part of the Freedom Fest Celebration in Pine Bluff, members of the Cosmopolitan Choir participated in the 150-voice choir which was presented in concert along with the Pine Bluff Symphony Orchestra.

The choir also participated in celebrations for Dr. Martin Luther King Jr., the Emancipation Proclamation and the Old Towne Christmas.

After the 1992 death of the founder, the choir initiated a scholarship in his name in 1993. The David Hodge Jr. Scholarship is awarded to a Vesper Choir student and a student majoring in music at UAPB, according to the release.

Each year before and during the choir anniversary celebration, donations are made to the scholarship fund. During this celebration the choir performs its favorite selections at Damascus Church, featuring special guests, and they honor individuals in the community who have given much service in the field of music.

The choir continues to sponsor the Hodge scholarship. Donations are made annually to UAPB during the Homecoming assembly. The choir also administers the Alfreda Shootes Hill Scholarship, named for another area educator and musician.

The charter members are Columbus Higgins, Katryne Horton, and Ezerene Williams. The choir's board of directors are Michael J. Bates, Parnell McCray, Milton Gardner and the Rev. Louis Williams.

The choir was granted the status of a nonprofit corporation April 12, 2011.

"The choir continues to live because of a shared feeling of public service, a great love of music, a love for each other and a greater love of God. With the commitment of loyal supporters, they have come this far," according to the release.