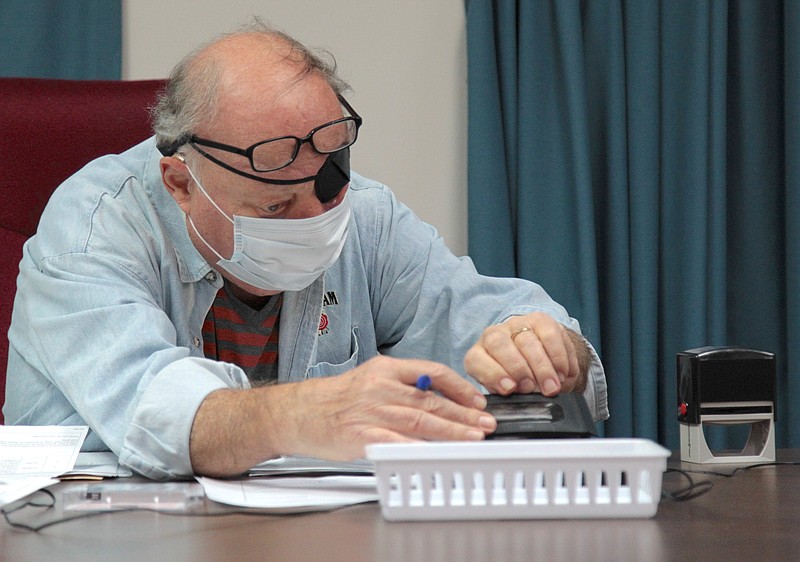 Jefferson County Election Commissioner Stuart "Stu" Soffer, is shown in this file photo from earlier this year. A complaint filed by the chairman of the Democratic Party of Arkansas against Soffer and fellow commissioner Michael Adam, was dismissed by the State Board of Election Commissioners after it was determined the complaint had not been filed within the 60 window of the election that is required. (Pine Bluff Commercial file photo)

The state Board of Election Commissioners dismissed a complaint filed against Jefferson County election commissioners Stuart "Stu" Soffer and Michael Adam that was filed earlier this year by the chairman of the state Democratic Party, but another has already been filed.

The original complaint alleged that the consolidation of three polling sites by the Election Commission was done illegally because the vote to do so was not unanimous, that not all commissioners were notified of the upcoming vote, that the public was not informed of the meeting and the meeting was not held in public, and that the minutes of the meeting were never filed with the county clerk's office.

In an email, Soffer said the complaint dismissed by the board had falsely claimed that state law was violated when he and Adam, both Republicans, voted Jan. 23 to consolidate three polling sites if those sites did not reach a certain level of use in the March primary elections.

At the time of the vote, Theodis "Ted" Davis, a Democrat, had tendered his resignation from the commission, citing a "culture of corruption," but he was reinstated the following month and Democratic Party officials have contended that because his resignation was not accepted, he was technically still a member of the commission.

In the email, Soffer said he wished to express his appreciation "for the state board seeing through the partisan smokescreen in dismissing the complaint. This is what they do to obtain publicity regardless of what the truth or facts are."

However, Chris Madison, legal counsel for the state board, told the Pine Bluff Commercial that the complaint was dismissed because it was filed outside of the required time period of 30 days before or after the election referred to in the complaint.

"I think it's the resubmission of the one they sent back earlier before the election but they may have added some additional information," Madison said. "I've seen it but I haven't read it because I'm working them in sequence of receipt and that one is further down the list."

Madison said he could not be certain, but he thought the complaint mirrored the earlier complaint that was dismissed.

"We had to dismiss the previous one because we have a very limited window of when we can accept complaints so it was dismissed on those grounds," he said. "I think it's similar but I have not read it completely so I can't say that for certain."

The new complaint, because it was received on the 30th day after the general election, will be reviewed.

Madison explained that the complaint-review process encompasses three steps, the first of which is the timeliness of the submission, meaning if it was filed inside the 60-day window around the election.

If so, he said the complaint is reviewed to confirm that the allegations it contains are allegations that are addressed by election law.

"We get complaints all the time that are really ethics issues," he said. "So we say this isn't us, this is ethics."

"I haven't read this one yet so I can't make that determination," Madison said.

Reached by telephone Friday, Gray said the complaint was essentially the same, but said he had included some additional information. But, he said, the resubmission was done to get the complaint filed inside the window where it would be reviewed.

Gray said he was not certain exactly when the original complaint was filed but he said it was sometime after the primary election in March.