Fayetteville's trails plan in motion for next year 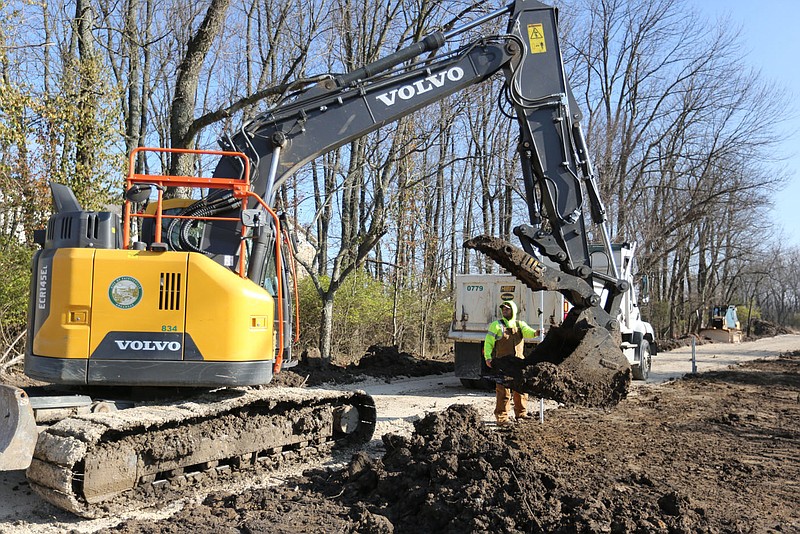 Joshua Littrell, with the city of Fayetteville Trails Department, monitors Friday, Dec. 4, 2020, work on the Clabber Creek Trail between Truckers Drive and Holcomb Elementary School in Fayetteville. The city has about 5 miles of new trail construction planned next year using a mix of capital, bond and grant money. Check out nwaonline.com/201206Daily/ and nwadg.com/photos for a photo gallery. (NWA Democrat-Gazette/David Gottschalk)

FAYETTEVILLE -- The city will use other revenue sources to build more trails than usual next year despite a slightly smaller budget allocation from the City Council.

The city typically spends $1.5 million a year out of its capital budget to build 2 to 3 miles of trails per year. Next year's trails budget line item is $1.4 million, $100,000 less than this year. City administrators reduced spending on capital projects across the $171.8 million overall budget for next year to account for potential revenue loss from the pandemic.

The city also will use grants and money from a bond issue voters approved last year to take on a total of 10 paved trails projects. The 10 projects add up to nearly 5 miles.

The city has 48 miles of paved trails.

The city's transportation crews will build four of the 10 projects planned for next year: Clabber Creek Trail from Holcomb Elementary School to Truckers Drive; widening a portion of the Razorback Greenway along Lake Fayetteville; a trail on Rupple Road from Wedington Drive to Hamestring Creek Trail; and segments on Alberta Street through the Walnut Crossing subdivision west of Rupple Road.

Three of those projects will come out of the trails budget. A federal Recreational Trails Program grant for $150,000, administered through the state, will help pay for widening about 1,900 feet of the Razorback Greenway at Lake Fayetteville. That stretch of the greenway is the most popular trail segment in the city, with an average of more than 41,000 users per month, Trails Coordinator Matt Mihalevich said.

The city's crews likely will be able to finish three of the four projects in 2021 if the weather cooperates, Transportation Services Director Terry Gulley said. Anything unfinished will roll into the plan for 2022, he said.

Contractors will handle six other projects on the list for next year: rehabilitating the section of the Razorback Greenway under the North Fulbright Expressway; closing a gap on the Tsa La Gi Trail from Beechwood Avenue to Razorback Road; building a bridge on Hamestring Trail to Woodridge Drive; creating a separated bicycle path on Maple Street from the Razorback Greenway to Garland Avenue; turning an old entrance drive at Millsap Mountain into a paved trail serving Centennial Park near Old Farmington Road; and replacing the Razorback Greenway from Prairie to Center streets as part of the cultural arts corridor.

An $88,000 grant will help pay to fix the eternally wet tunnel stretching about 700 feet beneath the North Fulbright Expressway and Futrall and Shiloh drives. The tunnel is actually a box culvert meant to control the flow of Scull Creek, but was converted into a trail tunnel in 2008. Water seeps in from the creek, making for a wet ride regardless of the weather.

"It's kind of a blemish on this world-class greenway that we have," Mihalevich said. "People come through and have to ride through that wet mud."

City engineers plan to use steel plates to angle the water out of the tunnel and will add a proper floor to decrease seepage, Mihalevich said. The project should happen next month and take a few days to finish, he said.

Laura Canter, a member of the city's resident-led advisory panel on active transportation, said she's most excited about the Fulbright tunnel project. The closing for a few days and detours will be worth it, she said.

The city uses a matrix that takes into account proximity to schools, neighborhoods and businesses, network connectivity, natural areas and other factors to prioritize trail projects. Canter said the objective data match well with her subjective preferences for where trails should go and hopefully the projects will appeal to a wide range of residents.

"Everyone in the city feels their area or the project they want is most important, so we try to balance that," she said.

All of the projects being handled by contractors, except the Fulbright tunnel, are part of Phase I of the trails bond program. The first of three phases covers more than $2.4 million of the $6.8 million trails bond issue.

Those five projects represent most of Phase I. Two more projects also are included in Phase I, but are on the schedule for 2022. The projects are Mission Boulevard from Viewpoint Drive to Maple Street and Prospect to Rebecca streets; and the Midtown Trail stretching from Interstate 49 to College Avenue, roughly along Deane, Sycamore and Poplar streets.

The plan will go before the Parks and Recreation Advisory Board on Monday. The Transportation Committee, consisting of half the City Council, will review it Dec. 29. 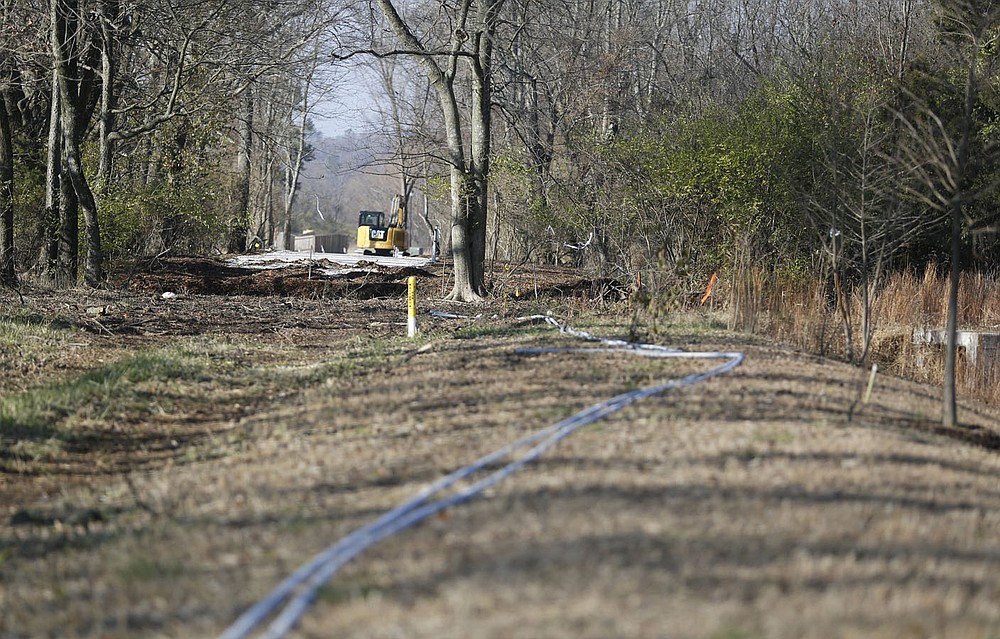 Work continues by the city of Fayetteville Trails Department Friday, Dec. 4, 2020, on the Clabber Creek Trail between Truckers Drive and Holcomb Elementary School in Fayetteville. The city has about 5 miles of new trail construction planned next year using a mix of capital, bond and grant money. Check out nwaonline.com/201206Daily/ and nwadg.com/photos for a photo gallery. (NWA Democrat-Gazette/David Gottschalk) 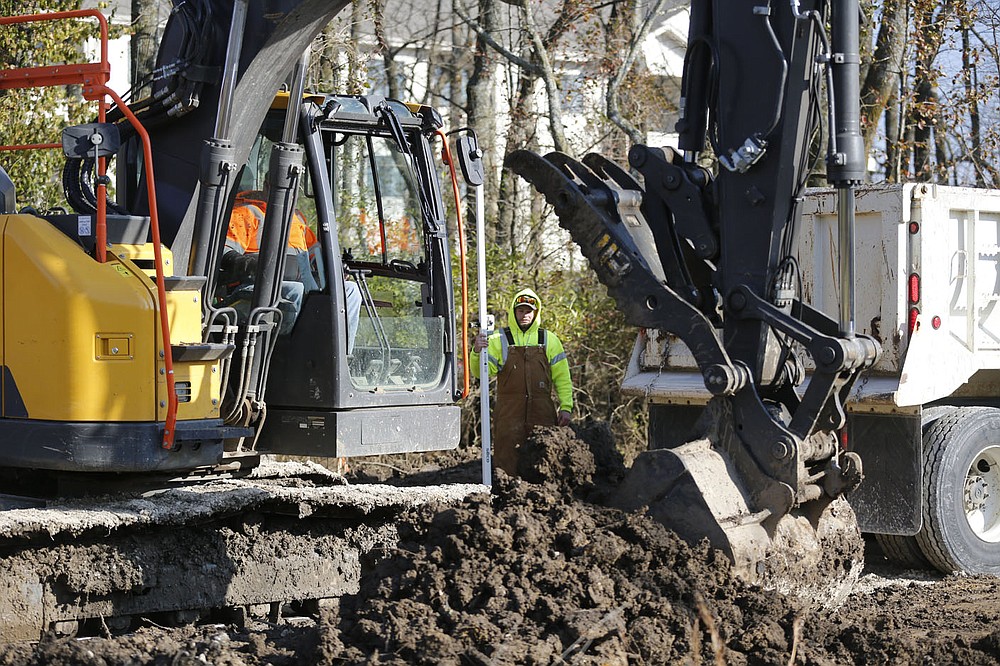 Joshua Littrell, with the city of Fayetteville Trails Department, monitors Friday, Dec. 4, 2020, work on the Clabber Creek Trail between Truckers Drive and Holcomb Elementary School in Fayetteville. The city has about 5 miles of new trail construction planned next year using a mix of capital, bond and grant money. Check out nwaonline.com/201206Daily/ and nwadg.com/photos for a photo gallery. (NWA Democrat-Gazette/David Gottschalk)
More News