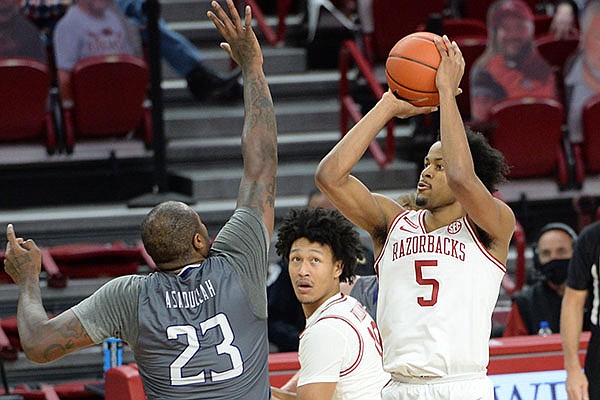 Arkansas guard Moses Moody (5) takes a shot in the lane Saturday, Dec. 5, 2020, as Lipscomb center Ahsan Asadullah (23) defends during the first half of play in Bud Walton Arena.

Moses Moody scored a game-high 18 points on 7 of 8 from the floor and Arkansas ran away to a big win over Lipscomb on Saturday in Bud Walton Arena.

Moody scored 10 of his 18 in the first half then pitched in eight more in the second half on 3 of 3 from the floor. He has scored in double figures in each of his first four games at Arkansas, and he led the Razorbacks in scoring in both games this week.

We will have more from tonight's game later on WholeHogSports.com.

The Razorbacks have only hit one shot over the last four minutes and that came from Davonte Davis on a nice floater in the lane. Arkansas has cleared its bench. Emeka Obukwelu is getting some playing time here late.

JD Notae fouled out just a moment ago with 12 points on 5 of 12 shooting. He added three turnovers, too. Vance Jackson has 10 points on 3 of 9 shooting.

Lipscomb has missed 15 of its last 18 shots.

Moses Moody is up to 18 points and eight rebounds. He has let the game come to him and he has turned in such an efficient game to this point. Eric Musselman is going to love his work on the glass, too.

Vance Jackson (10 points) knocked down a couple of 3s in the last few minutes and he has five rebounds tonight. The Razorbacks have gotten 29 points from their bench, up from eight on Wednesday.

Lipscomb, which does not have a player in double figures yet, has hit only 11 shots tonight. The Bisons are shooting 23.4% from the floor.

He offensive rebounded a miss a moment ago then drove the lane and got a contested layup to drop. A possession or two later, he drove baseline on a feed from JD Notae and avoided a charge, getting a layup to go. Moody is up to 16 points to lead all scorers, and he is 6 of 7 shooting tonight.

Notae added a driving layup as well, giving him nine points on 4 of 8 from the floor. Justin Smith also has nine points.

The Razorbacks have taken great care of the basketball tonight. They have only seven turnovers, and Jalen Tate and Smith have accounted for four of them.

Jalen Tate added the only Razorbacks score between the breaks. He has six points tonight.

Ahsan Asadullah was just hit with a technical foul. It has been a frustrating night for him to this point. He has six points on 3 of 8 from the floor.

The Razorbacks have opened the second half on a 10-0 run fueled by scores from Justin Smith, Jalen Tate and Desi Sills. Smith has five points since the break and nine for the game.

Sills has six points, four rebounds and a pair of assists tonight. Arkansas has outscored Lipscomb by 28 points with him in the lineup.

Lipscomb is 0 of 6 from the floor in the second half. And the Bisons' luck around the rim hasn't changed. They are now 4 of 19 for the game.

Moses Moody leads all scorers with 10 points and is the only player in double figures so far. Loved Moody's midrange touch and the fact he got off to a hot start with a pair of early 3s. He's been so solid.

JD Notae has seven points off the bench and his shot selection has improved a bit. We'll see how much he plays in the second half after taking an elbow to the face midway through the half. Jaylin Williams and Connor Vanover pitched in six points each, too.

Lipscomb really struggled offensively in the first half. It made only 4 of 16 attempts at the rim, and no player has more than four points at the break. The Bisons are shooting 29.6 percent

Justin Smith nearly posterized a Bisons defender with a tomahawk dunk, but missed. He did, though, hit both free throws after drawing a whistle. He has four points tonight.

Jaylin Williams just knocked down a right-corner 3 to push Arkansas' lead to 25. Williams has six points, four rebounds and has played a very solid game so far outside of a pair of turnovers.

JD Notae got a tough spinning layup to go with his right hand prior to the timeout, then on Lipscomb's ensuing possession got elbowed in the face and had to be subbed out. He has seven points tonight and a pair of rebounds in nine minutes.

Davonte Davis providing great energy off the bench. Eric Musselman wasn't kidding in the preseason that Davis really thrives chasing down loose balls and rebounds. He has three boards in five minutes.

JD Notae added all five points over the last 2-plus minutes. He drove into the lane, missed a layup, grabbed his own miss and stuck it back. A couple of possessions later, he worked himself open on the left wing for a 3 after using a nice jabstep. He, no doubt, has some pro moves in his bag. It's just always about shot selection.

All nine Razorbacks who have seen the floor tonight have scored. Moses Moody and Connor Vanover lead the way with six points. Vanover has missed his last four 3s after burying his first two looks.

Lipscomb has not scored over the last 4:19 and missed on its last six shots.

Jaylin Williams checked in for Connor Vanover after the first stoppage of the game and immediately hit the offensive glass. He rebounded a missed 3 and got a layup to fall plus the foul.

Jalen Tate and Vance Jackson added layups between timeouts, and KK Robinson also hit a sweet pull-up jumper right of the lane. For Jackson, it was his first bucket since the season opener. Had to feel nice to know there isn't actually a lid on the rim.

After the Razorbacks went up 17, the Bisons went on a 6-0 run behind scores from three different players. Lipscomb is just 5 of 16 from the floor early on, while Arkansas is 10 of 16 overall and 5 of 11 from deep.

The Razorbacks' offense is clicking on all cylinders in the early going. Justin Smith added the team's first score on a designed play for him. Connor Vanover has knocked down a pair of 3s already and assisted on another score.

Moses Moody knocked down a right-wing 3 off a feed from Vanover then canned another from the left wing, forcing a Lipscomb timeout. Desi Sills also has a triple to his name.

Arkansas has assisted on five of six buckets, and Jalen Tate has three assists. Lipscomb is 1 of 7 from the floor.

Third consecutive game Eric Musselman has opted to run with this bunch to open things up. Moody leads the Razorbacks in scoring at 17 points per game, followed by Smith 14 and Vanover’s 13.7. Sills and JD Notae are also averaging in double figures through three games.

It will be interesting to see if Notae and Vance Jackson can get going offensively. KK Robinson and Notae are the only two bench players who have scored in the last two games. Jackson has missed his last five 3-point attempts over his last two outings. Musselman called for Notae to improve decision making and shot selection on Thursday.

Asadullah is a player to watch tonight. He averaged better than 18 points and 10 rebounds per game last season and was one of 20 players named to the Kareem Abdul-Jabbar Award watch list this preseason. He is 17 of 33 from the floor this season, including 4 of 11 on 2-point looks and 0 of 4 at the free throw line against Cincinnati this week. He has been turnover prone through three games – 14 miscues - but also has 17 assists.

Jones is the lone Lipscomb player who has knocked down more than three 3-pointers this season. He is 10 of 20, connecting on four triples in the Bison's first two games and two against Cincinnati. Jones scored a season-high 18 points against Tulane on Nov. 29.

As a team, Lipscomb does not offensive rebound well. It is grabbing just 15.7% of its misses through three games. The Bison have also had their shot blocked on 13.5% of attempts, which is not a good number at all. And defensively, Asadullah has the team's only blocked shot to this point.