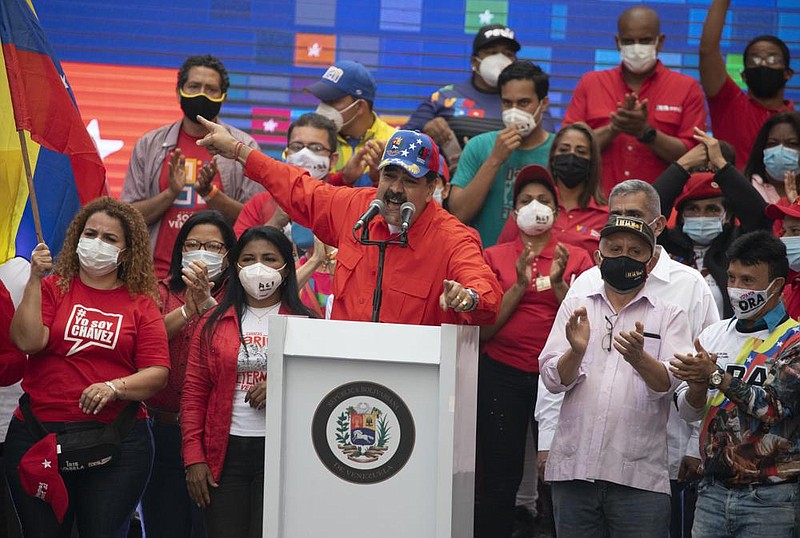 CARACAS, Venezuela -- When Venezuelans head to the polls Sunday to elect a new National Assembly, one big name will be missing from the ballot.

Juan Guaido, the legislature's current president, recognized by the United States and more than 50 other countries as Venezuela's rightful leader, is boycotting the election. Guaido and his U.S.-backed opposition say there's no way authoritarian President Nicolas Maduro will allow a free and fair vote.

Instead, Guaido and other opposition lawmakers are sponsoring a weeklong referendum asking Venezuelans to reject Maduro's "usurpation of the presidency" and the elections on Sunday. Participating in the vote "will only benefit the regime and its accomplices," Guaido has tweeted. "The best thing we can do is leave the voting center alone."

But in the opposition's absence, Maduro loyalists are expected to regain control of the legislature.

Guaido bases his claim to Venezuela's interim presidency on his leadership of the National Assembly, considered the last democratically elected institution in the South American nation. The Trump administration has said it will continue to recognize him after the new legislature is elected; advisers to President-elect Joe Biden say he'll do the same.

[Video not showing up above? Click here to watch » https://www.youtube.com/watch?v=_FwyO99-XBI]

But nearly two years after Guaido rose from obscurity to unify much of Venezuela's historically fractious opposition, the movement he leads has ground to a near-halt -- disappointed by the failure to oust Maduro, limited by the coronavirus and beset again by infighting of the sort that doomed previous efforts to present an effective counter to the socialist government founded by Hugo Chavez.

Ordinary Venezuelans, meanwhile, continue to suffer under hyperinflation, high unemployment, chronic shortages of basic goods and, this year, the coronavirus. Millions have fled, though some have returned during the pandemic.

"The opposition is in dire straits," said Geoff Ramsey, director for Venezuela at the Washington Office on Latin America. "Unless they find a way to resolve internal disputes and reconnect with the day-to-day struggles faced by the population, it will be difficult for the coalition to stay relevant."

Maduro, whose reelection in 2018 is widely viewed as fraudulent, has campaigned hard for his allies. They include former assembly speaker Diosdado Cabello and Maduro's own son, Nicolas Maduro Guerra.

"I call my people to the battle," Maduro said Sunday in a nationally televised address. "It's been five years of [the opposition] saying they will destroy Maduro, asking for a military intervention and a war for Venezuela ... We need to recover the National Assembly."

If the opposition wins, he said Tuesday, he will resign the presidency. But with little competition, there's slim chance of that.

"It's very clear that these elections are neither free nor fair, and the outcome is all but guaranteed," Ramsey said. "Maduro is moving ahead with this vote not because he expects the international community to recognize the results, but because he wants to turn the page on the Guaido chapter."

Guaido and his allies have supported the hard U.S. line against Maduro. The Trump administration has ratcheted up sanctions aimed at asphyxiating the government; the Justice Department has indicted Maduro and several members of his inner circle on charges of narcoterrorism.

The approach has failed to dislodge the president -- but it has divided the opposition.

"There is a part of the opposition that still believes in pressuring the government until it breaks," said Stalin Gonzalez, a former Guaido ally who has distanced himself. "But this would mean someone in the government is going to open, and how are they going to do that when you put a price over the head of every single strong member?"

"Sanctions," he continued, "are not hurting high-ranking officials. They have enough money to buy whatever they want. Citizens, on the other hand, are losing. How can we expect people to protest when they are struggling to survive?"

Two-time presidential candidate Henrique Capriles broke with Guaido publicly in September, opening negotiations with Maduro's representatives to draw European Union observers to monitor Sunday's vote. The talks ended without an agreement, and candidates allied with Capriles withdrew from the election.

Advisers to Biden say he won't recognize any vote that is not "free and fair," and will continue to recognize what one called the "democratically elected National Assembly." That includes Guaido as its leader, for at least as long as the opposition fails to come up with a universally accepted alternative.