Maskless fan at UA tossed out, then barred 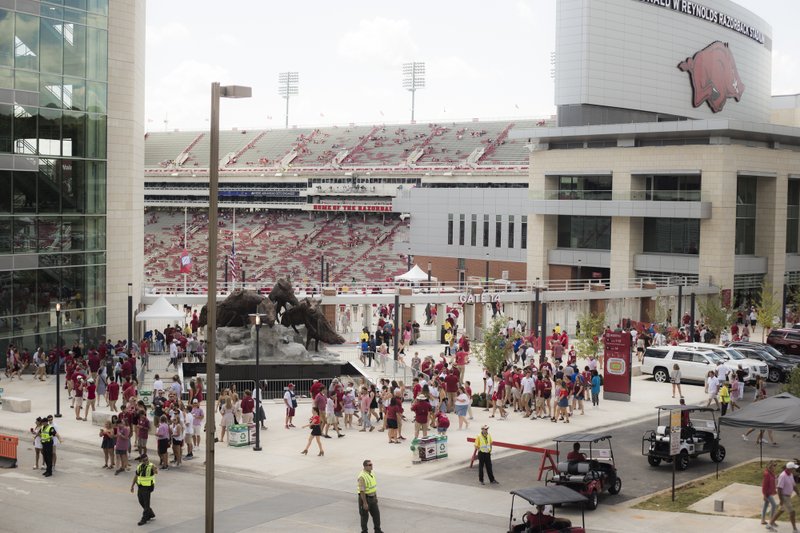 FAYETTEVILLE -- A man confronted twice by University of Arkansas police at a Razorbacks football game over his failure to wear a face covering was arrested Nov. 21 after police said he was disorderly and obstructed officers.

Seth Pitts, 30, left Donald W. Reynolds Razorback Stadium in handcuffs and was barred from campus for one year, meaning he could be arrested on criminal trespassing charges if spotted on UA property.

UA police spokesman Capt. Gary Crain said officers arrested Pitts because of his behavior after being informed of the mask requirement, not because he wasn't wearing one. With the ongoing pandemic, face coverings are required to attend all UA athletic events based on a plan submitted to the state Health Department, a university spokesman said.

A police report states that Pitts argued with officers after being told he was being ejected from the game, and that Pitts would not provide identification when asked repeatedly.

Pitts, a resident of Lincoln in Washington County, referred comment to his attorney, Jay Moore.

"At this point we haven't had an opportunity to review the reports and officer's body camera videos," Moore said in an email, calling it "premature to comment about the case."

Pitts tried to enter the stadium without a face covering, according to the police report and video footage released under the state public-disclosure law.

"While at gate, I observed a male walk by three University officials who were trying to get the male to put a mask on. The male flipped one of the females off as he passed her. The male continued through the line until I made contact with him at the ticket scanner," states a written report by Cpl. Ryan Barber.

Body-camera video begins at the ticket scanner and shows Pitts and Barber discussing his lack of a face covering.

"You're not going in without a mask," Barber tells Pitts.

"This is the fourth game I've been to and I haven't worn a mask for four games," Pitts replies, pausing before adding, "I'm going in."

"Nope," Barber replies, warning Pitts that he is in danger of getting "criminally trespassed" from the stadium.

Told again of the mask requirement, at one point Pitts states, "Cut the s*, the election's over. We can get past that now."

Video shows Pitts putting on a mask when one is handed to him. He then enters the stadium, ignoring a request by police that he wait so a commanding officer can speak with him.

The body camera footage briefly stops. Barber's written report states: "The male walked immediately into a bathroom and came back out without the mask on. I followed the male into the stairwell and told him to stop."

Body-camera footage shows Pitts in a stadium stairwell without a mask. Based on the time stamp of the video, this is less than five minutes after Pitts entered the stadium, roughly a half-hour before the scheduled 11 a.m. kickoff against Louisiana State University.

An officer then tells Pitts he is being ejected from the stadium. Pitts asks why and is told he isn't following the rule requiring a mask. He then puts the mask back on.

"You asked me to put a mask on, I did. I walked past you," Pitts says.

"And then you went to the bathroom and took it off and started walking around," an officer states.

After some continued talking -- at one point Pitts says, "How can you eject me if my mask is on?" -- Pitts does not provide identification when asked to do so by police. He is then grabbed and forcibly turned, with an officer placing his wrists in handcuffs.

Pitts is then driven to the county jail but eventually released with the citations and jail officers advising that with misdemeanor charges perhaps Pitts could be cited rather than booked into custody.

"The same pandemic that requires Mr. Pitts to wear a mask at the football game, was also the reason the jail refused to accept Mr. Pitts," the police report states.

Crain, the UA police spokesman, said that at UA events, those without a face covering will first be told of the masking requirement. Typically, a few extra masks are available and one would be given out. There is a medical exemption from the requirement, he said.

"The first contact will probably not be with the police, it will be with someone who will inform them of the rule. In order for the police to get involved, it has to be an escalation of misbehavior," Crain said.

Kevin Trainor, a university spokesman, said in an email that the mask requirement for Razorback athletic events has been "widely communicated and has been enforced throughout the season."

"Fans must comply with policies to gain entry into the venue. If fans do not comply within the stadium, they are asked by personnel to do so. As with all policies, failure to adhere to requirements may result in ejection from the venue," Trainor said.