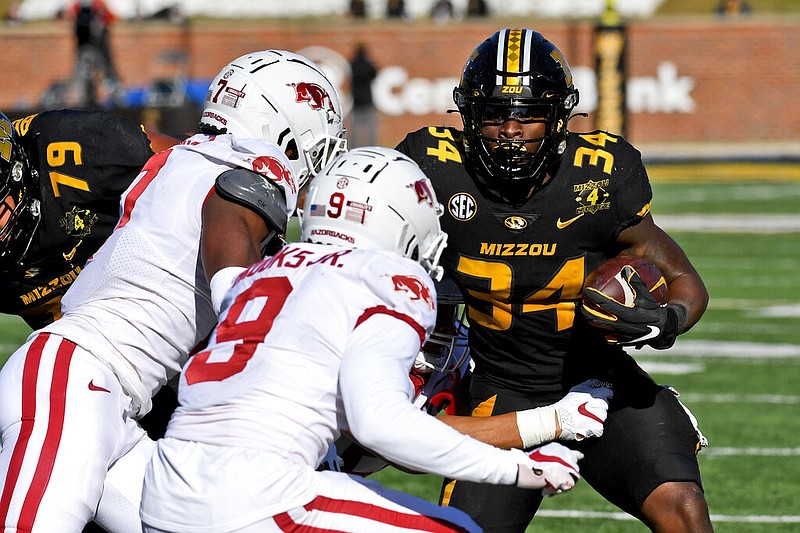 Missouri running back Larry Rountree III (34) runs with the ball as Arkansas defensive back Joe Foucha (7) and defensive back Greg Brooks Jr. (9) defend during the first half in Columbia, Mo., on Saturday, Dec. 5, 2020. (AP Photo/L.G. Patterson)

In a surprise, the University of Arkansas took the field against Missouri on Saturday without senior starting quarterback Feleipe Franks under center.

Backup quarterback KJ Jefferson, a redshirt freshman, was ready. But Missouri had the answer in the fourth quarter of a roller-coaster 50-48 victory at Faurot Field in Columbia, Mo.

Trailing 40-26 with 13:15 to play, Missouri scored 21 unanswered points to take a 47-40 lead. Arkansas took a 48-47 lead with 43 seconds left on a Mike Woods' touchdown reception from Jefferson, followed by a two-point conversion pass between the two.

The loss was the Razorbacks' fifth consecutive in the Battle Line Rivalry against Missouri.

Jefferson finished 18-of-33 passing for 274 yards, 3 touchdowns and zero interceptions. He also ran 13 times for 32 yards and 1 touchdown.

Franks missed the game with a rib injury. During a halftime interview, Coach Sam Pittman said it was determined Saturday morning that Franks wouldn't be able to start.

After a slow start that saw Missouri (4-4) take a 10-0 lead, Jefferson and the Arkansas offense put up 27 second-quarter points to lead 27-20 at halftime.

Trelon Smith ran for 172 yards on 26 carries and 3 TDs for the Razorbacks (4-5) in his first start since senior co-captain Rakeem Boyd opted out of the remainder of the season last week. Treylon Burks had 10 catches for 206 yards and 1 TD for Arkansas.

Missouri finished with 653 total yards to the Razorbacks' 566 yards.

Arkansas contributed 20 yards to Missouri’s field goal drive on Isaiah Nichols’ low hit on QB Connor Bazelak and Julius Coates being offsides on a muffed snap that would’ve gone for lost yardage. Larry Rountree had a 10-yard run to the Hogs’ 29, but Coates sacked Bazelak for a 13-yard loss. Harrison Mavis nailed a 51-yard FG. With KJ Jefferson at QB, the Razorbacks went 3 and out, as Treylon Burks dropped a third down slant. The Tigers failed to convert on 3rd and 5, but offsetting penalties gave them another shot, and Tauski Dove caught a 5-yard slant. Rountree had 6 carries for 20 yards and scored from the 2 after Bazelak’s 29-yard deep ball to Keke Chism. Jefferson engineered a 75-yard TD drive that took 4:29. The Tigers had two defensive penalties, Burks caught a 15-yard pass and Jefferson had a 16-yard scramble to the 9. Jefferson hit Blake Kern with a 2-yard play-action pass for his first career TD. A.J. Reed missed the PAT. The Tigers had three consecutive double-digit gains: Jalen Knox’s 13-yard pop pass, Chism’s 11-yard catch and Rountree’s 10-yard run. Arkansas safety Myles Slusher came off woozy on the final play of the period at the Hogs’ 40.

Larry Rountree ran 13 yards, then Barrett Banister grabbed a 9-yard pass on 3rd and 7. The Hogs held on their 12 and Harrison Mavis booted a 29-yard FG. Nathan Parodi was tackled on the 11 on a short kickoff return. TJ Hammonds bolted over the right side for a 2-yard gain. KJ Jefferson overthrew an open Hammonds deep on the next snap, then rebounded to connect with Treylon Burks for a 68-yard touchdown on the next snap to forge a 13-13 tie. After Connor Bazelak hit Keke Chism with a 29-yard strike on a flea flicker, another defensive offsides aided the Tigers. Banister’s 9-yard catch converted 3rd and 8. Rountree scored from the 6. Burks caught a 14-yard pass then added a 10-yard run. Hammonds had runs of 9 and 6 yards. Trelon Smith took a pitch from Burks 5 yards on 3rd and 3 and Smith scored from the 8 two plays later. Arkansas forced its first 3 and out. Missouri LB Nick Bolton was ejected for targeting. Jack Lindsey raced 20 yards with a fake punt from the 25. Smith had five carries for 34 yards and Jefferson sneaked in from the 1 to give Arkansas the lead. The Tigers moved to near midfield but drew a delay of game as the half came to a close.

Trelon Smith gained 7 yards on first down but the Hogs went three and out. Larry Rountree had a 34-yard burst at left end to open the Missouri series. Montaric Brown was called for pass interference. Grant Morgan had a 3-yard TFL. Harrison Mavis made a 37-yard FG to cap the 60-yard series. Smith had a 13-yard burst to open the series. KJ Jefferson found Treylon Burks for 41 yards to convert 3rd and 15. Smith ran four plays in a row for 26 yards, the last a 15-yard TD. Missouri moved the chains once on Barrett Banister’s 6-yard catch, then punted 40 yards to the Arkansas 34. Smith bolted 21 yards around the left edge. Safety Martez Manuel broke up a third down pass and Reid Bauer punted to the 16. Missouri overcame a holding penalty. On an incomplete pass on 2nd and 11, the officials flagged Arkansas safety Joe Foucha for a suspect unsportsmanlike conduct penalty. Arkansas LB Grant Morgan came out with a left leg injury after a pileup on a run up the middle. Connor Bazelak found Tauskie Dove for a 13-yard gain to convert a 3rd and 5 to the Arkansas 27. Missouri faced 3rd and 6 after the last play of the quarter.

Connor Bazelak threw incomplete on 3rd and 6, and Harrison Mavis came on for his fourth FG, a 40-yarder. Treylon Burks somehow got a left foot toe tap and caught a 19-yard pass. Trey Knox took a slant for 22 yards, then Burks caught a 14 yard pass. Trelon Smith took a fake toss counter play over the left edge for a 16-yard TD. The Tigers were in the end zone two plays later. Damon Hazelton caught a 29-yard pass. Tyler Badie got free around the left side and raced 46 yards for the score. A couple of Smith runs netted 11 yards, but the Razorbacks punted three plays later to the Tigers’ 18. Hazelton’s 32-yard grab converted 3rd and 7. Keke Chism caught a 25-yard deep ball vs. Malik Chavis. Larry Rountree scored a 9-yard TD. Burks caught a 10-yard pass, but Trajan Jeffcoat sacked him on the next sequence, forcing a punt. Rountree ripped off a 46-yard run and Badie completed the four-play drive with a go-ahead 25-yard TD. The Hogs drove 75 yards. Burks converted a 4th and 1 with a 1-yard run. Jefferson hit Mike Woods with a 14-yard throwback TD. Sam Pittman went for the win and Woods brought in a would-be interception for the 2-point conversion. Bazelak went 4 for 4 for 54 yards and Mevis converted a 32-yard FG on the game’s final play.