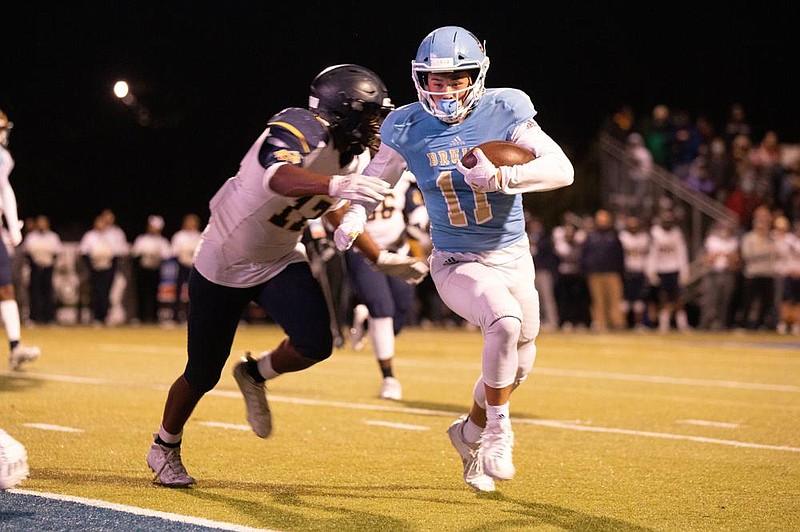 Pulaski Academy wide receiver Dylan Allison (right) avoids a tackle from Wynne’s Cam’Ron Holmes to score on a two-point conversion Friday during the Bruins’ 52-14 victory over the Yellowjackets in the Class 5A semifinals. More photos at arkansasonline.com/1205wynnepa/. (Arkansas Democrat-Gazette/Justin Cunningham)

Make it seven state championship appearances in a row for Pulaski Academy.

The Bruins defeated Wynne 52-14 on Friday night in a Class 5A semifinal game at Joe B. Hatcher Stadium in Little Rock.

“It’s because you have a bunch of kids that buy in, and our coaches are great leaders at individual positions. I’m in here trying to pull it together,” Pulaski Academy Coach Kevin Kelley said. “In the end, if you have coaches who buy in and have coaches who are intelligent and smart and use the analytics of football, you’ve got a chance to take smaller guys and go on a run and stay at a high level.

“It’s hard to stay on top because everybody’s trying to pull you down. Everybody takes their best shot. That’s what makes me respect these kids more.”

Joe Himon accounted for 241 yards offensively for the Bruins. He rushed for 118 yards and 2 touchdowns on 18 carries, and caught 9 passes for 123 yards.

Charlie Fiser passed for 234 yards and 3 touchdowns, while Nolen Bruffett had 146 yards and 2 scoring passes.

“They’re a good football team,” Paschal said. “We knew that coming in. We never got a good rhythm offensively.”

Pulaski Academy led 24-14 at halftime despite having only four drives in the first half.

“Thank God we were able to be efficient and score on three of the four drives and give us a little bit of a lead,” Kelley said.

The Bruins went 93 yards in 14 plays for their first score that took 5:13 off the clock.

Fiser’s 24-yard pass to Himon set up his 3-yard touchdown throw to Cooper White. Dylan Allison caught the two-point conversion pass from Fiser to give the Bruins an 8-0 lead with 4:39 left in the first quarter.

Wynne responded as quarterback Marterius Ross scored from a yard out with 11:54 left in the second quarter to pull the Yellowjackets within 8-7.

Pulaski Academy made it 16-7 with 5:03 left in the second quarter on Himon’s 10-yard touchdown run and Caleb Nichols’ two-point conversion run.

The Yellowjackets came right back with a rare pass from their triple-option offense. Ross found a wide-open Devin Holmes for a 47-yard touchdown on the Yellowjackets’ first play of their drive to cut the lead to 16-14 with 4:52 left in the second quarter.

The Bruins added to their lead with a 2-yard touchdown pass from Bruffett to White and Allison’s two-point conversion run.

Ross was intercepted by Jalyn Witcher, and the turnover set up Fiser’s 13-yard touchdown pass to White, which stretched the Bruins’ lead to 38-14 with 10:02 remaining.

The Bruins added touchdown passes of 3 yards from Fiser to Charlie Barker, and 82 yards from Bruffett to Himon in the fourth quarter to cap their scoring Friday.

Ross led the Yellowjackets with 59 rushing yards and a touchdown along with a scoring pass.