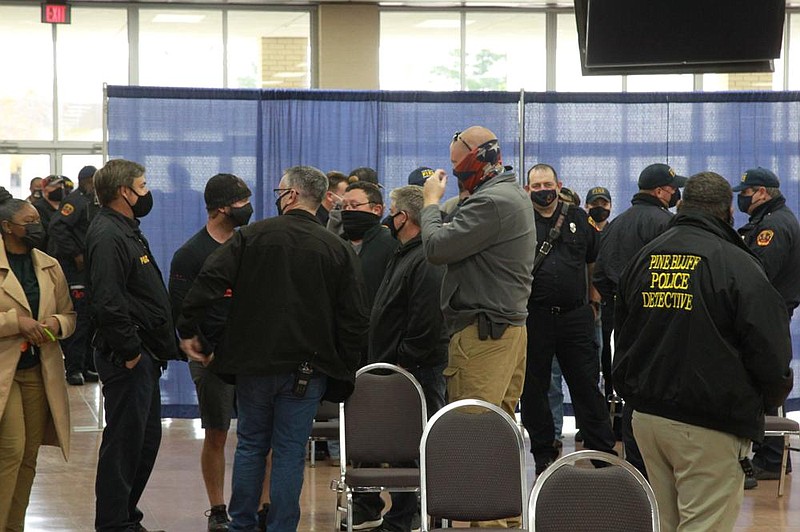 A large number of police and fire department personnel crowded into the Ways and Means Committee meeting Friday at the Pine Bluff Convention Center as the committee ratified Mayor Shirley Washington’s recommendation that proposed salary increases for city employees be taken out of the budget. The committee did agree to a raise of $2,750 for firefighters. (Pine Bluff Commercial/Dale Ellis)

Tempers flared and sparks flew at the Pine Bluff City Council Ways and Means Committee meeting Friday morning as the committee met to consider the elimination of raises for city employees in the 2021 budget over fears of a worsening coronavirus pandemic.

Shortly before the meeting began, about 30 or so uniformed police officers and firefighters walked in, silently watching as the meeting got underway.

In October, the City Council passed a resolution to raise employee salaries to meet the minimum average salary range paid by cities around the state for similar positions based upon a salary survey conducted earlier in 2020 by the Johanson Group. In addition, the city planned to give employees a 3% cost-of-living increase. City officials said those raises would cost about $1.2 million, almost all of which was to be funded out of new money projected to come from revenue from the newly opened Saracen Casino Resort.

But with the coronavirus pandemic expected to worsen and revenue projections already reduced because of limits placed on the capacity of businesses, the possibility of a future shutdown has raised fears that a resulting revenue shortfall could wreak havoc on city finances.

Based on that fear, the committee voted in favor of Mayor Shirley Washington's recommendation that employee raises be taken out of the proposed budget.

The committee, did, however vote to recommend across-the-board raises for uniformed Fire Department personnel of $2,750, at a cost of $86,215.

To be finalized, all changes will have to be accepted when the budget comes up for a vote by the full City Council, which, by law must be done no later than the end of January.

Fire Chief Shauwn Howell was told during those budget talks that an effort would be made to address Fire Department salaries during the 2021 budget talks.

"We have to stabilize our Fire Department," said Council Member Steven Mays, chairman of the Ways and Means Committee. "We're becoming the training ground in the state as well as with our Police Department. We raised their salaries last year and now we kind of need to stabilize our public safety more than it is to keep our employees here. Whatever we can do to help stabilize these important and essential positions, we need to do it."

Council Member Ivan Whitfield, who is a former Pine Bluff police chief, objected to the committee's decision. He said the decision to remove the raises from civilian employees and police officers while expecting all of the employees to absorb an increase in the cost of health insurance -- which is projected to rise by 10% -- while providing raises for one department, was unfair.

"In the real world," Whitfield continued, "what you all are getting ready to vote on is the new way of defunding the police."

"Do not interrupt me," Whitfield demanded. "The chairman gave me the floor and when he tells me I'm through I'll be through. You can't interrupt me. Don't do that. Don't go there."

Whitfield continued, reiterating his contention that by not giving the Police Department raises in the 2021 budget, the council was effectively "defunding" the department.

"We walk around this community and talk about the homicides, the rapes, the burglaries, and our children being safe," he continued, "and we just told the Police Department that we're not worried about that right now."

Whitfield said he had supported raises for the firefighters but said those raises should come from the five-eighths percent sales tax passed in 2017 to fund downtown development. The tax, sometimes referred to as the "Go Forward Pine Bluff tax," raises some $4 million annually and is used to fund a variety of economic development and downtown revitalization initiatives.

"The reason we're doing this," Brown said, "is we don't know what revenues are going to look like in 2021. So we can't stretch out and make these commitments and not be able to fulfill them."

Brown said that later in the year, if conditions improve, the City Council could revisit the subject of pay raises. He chided Whitfield for his comments.

"For you to say we're trying to defund the police and all those kinds of things, that's totally untrue," he said. "Now, if the money were there, and we weren't in the middle of a pandemic I wouldn't have an issue with the 3% or the salary survey, but the fact of the matter is, we're in a situation that we've never been in before."

Mays voiced his long-standing support for both the police and fire departments, but said in the current situation, fiscal caution was warranted. He said his intention was not to take anything away from city employees but to make sure the city's financial condition remains solvent as the pandemic wears on.

As the discussion concluded, Whitfield left the meeting, followed by several police officers and firefighters.

Afterward, Bill Wiegand, president of the Pine Bluff Fraternal Order of Police, said removing raises for all except the Fire Department amounts to a pay decrease for all other city employees.

Wiegand said any comparison between the raises the police received last year and those the committee recommended for firefighters this year don't add up.

"They said we are going to do for the Fire Department what we did for the Police Department last year," he said. "There's no we. It was Chief [Kelvin] Sergeant who gave up 10 positions. The City Council only approved it."

Wiegand said he would not characterize pulling the raises out of the budget as an effort to defund the police, but he did say by doing so, it would make recruitment and retention efforts more difficult.

Brown acknowledged later that cutting out the raises does leave city employees in the position of having to absorb the insurance increase, a de facto pay cut, as things stood at the end of the meeting. However, he said, he intended to see if that could be addressed before the budget is finalized, but he did not know what the cost might be if the city were to absorb the insurance increase instead.

"I plan on getting with Mr. Miller before we pass the final budget to see what those numbers are to see if we will be able to actually cover some of that for them so it won't be such a burden," he said. "We're trying to find the best ways to budget the city's taxpayer dollars and we want to do right by our employees."

Brown said any accusation that the committee is trying to defund the police is not true.

"That is nowhere near what the truth is," he said. "We're not defunding the police. We try to fund the police every chance and whenever they need something we try to be there to provide that for them. But we're in a different time. We're in the middle of a pandemic.

"I wish he wouldn't make those kinds of comments in a meeting," Brown added. "It makes it seem like we're against the police and definitely we're not." 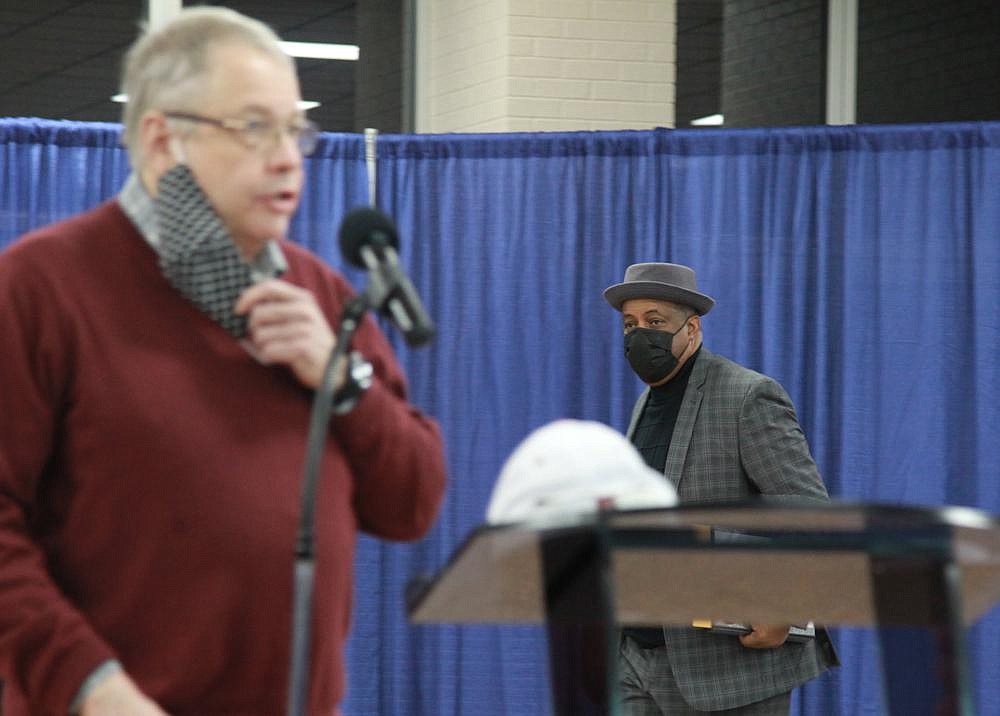 Council Member Ivan Whitfield (right) leaves the Ways and Means Committee meeting shortly after making angry comments that the City Council, by cutting proposed raises to city employees, including police officers, had found “another way to defund the police.” In the foreground is Finance Director Steve Miller, who was walking committee members through the changes proposed in the budget. (Pine Bluff Commercial/Dale Ellis)
ADVERTISEMENT