But work remains for Congress to bridge its differences by Compiled by Democrat-Gazette Staff From Wire Reports | December 5, 2020 at 5:34 a.m. 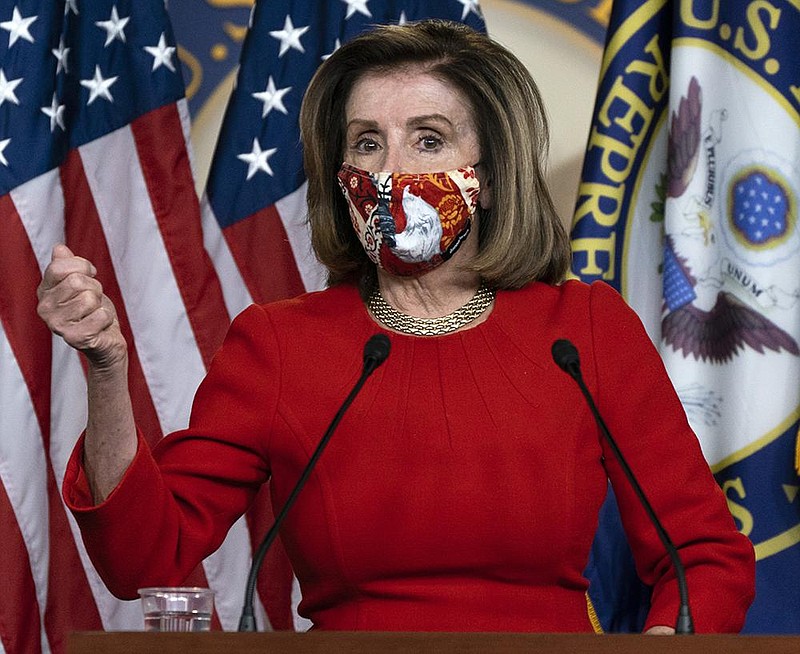 WASHINGTON -- After months of gridlock, optimism is building in Washington for a covid-19 aid bill that would offer relief for businesses, the unemployed, schools and health care providers, among others struggling as caseloads are spiking.

Under pressure from moderates in both parties, House Speaker Nancy Pelosi and Senate Majority Leader Mitch McConnell have initiated late-game negotiations in hopes of combining a relief package of less than $1 trillion with a separate $1.4 trillion governmentwide omnibus spending bill. The duo were the architects of the $1.8 trillion Coronavirus Aid, Relief and Economic Security Act, the landmark relief bill passed in March.

Considerable differences remain over items such as aid to states and local governments, liability protections for businesses and universities reopening during the pandemic, and whether to issue a second round of $1,200 direct payments to most Americans.

But renewing soon-to-expire jobless benefits, providing a second round of "paycheck protection" subsidies and funding to distribute vaccines are sure bets to be included in any deal.

The CARES Act created a $600-per-week bonus covid-19 unemployment benefit that sustained household incomes and consumer demand during the springtime shutdowns. It expired at the end of July and Republicans oppose its renewal. The act also allowed for additional weeks of emergency pandemic unemployment payments at regular benefit levels, a provision set to expire Dec. 31. Any deal is sure to extend the emergency benefits, and a bipartisan compromise framework that's helping guide the talks calls for restoring half of the bonus benefit, or $300 per week more.

Another sure thing is a reauthorization of the Paycheck Protection Program to give a second round of subsidies to businesses struggling through the pandemic and make other changes to the program, which enjoys bipartisan support but is particularly favored by Republicans. Leftover funds from two springtime infusions into the program would cover almost half of the roughly $300 billion cost.

President Donald Trump has long supported another $1,200 round of direct payments to most Americans, subject to income limits that make upper-bracket taxpayers ineligible. House Democrats support the idea, but it is unpopular with many Senate Republicans and was left out of a scaled-back Senate GOP plan. A bipartisan bill by Sens. Susan Collins, R-Maine, and others, leaves out the direct payments as well, and the roughly $300 billion cost could render them too expensive for inclusion in the year-end package, though lawmakers ranging from Alexandria Ocasio-Cortez, D-N.Y., to Sen. Josh Hawley, R-Mo., are pushing to retain them.

A round of aid to states and local governments to follow a $150 billion installment this spring is another tricky issue on the table. It's a top priority of Pelosi, D-Calif., and other Democrats but is opposed by many Republicans, who warn it would bail out states run by Democrats like California and New York. Trump doesn't like the idea either, but Pelosi's demands for the money have been slashed from earlier amounts approaching $1 trillion. Revenue losses due to covid-19 haven't been as large as feared. But smaller localities left out of the first tranche of payments are eager for funding. A plan endorsed by moderates would provide $160 billion.

At least one senator, Bernie Sanders, an Independent from Vermont, is opposing the measure.

Sanders said Friday that he would consider backing the relief framework only if it is "significantly" revised.

"Given the enormous economic desperation facing working families in this country today, I will not be able to support the recently announced ... covid proposal unless it is significantly improved," Sanders said in a statement, citing the inclusion of a "liability shield" intended to insulate companies, universities and others from coronavirus-related lawsuits.

Businesses reopening during the pandemic have for months been seeking a shield against lawsuits claiming negligence for covid-19 outbreaks. McConnell, R-Ky., is the most potent backer of the idea and he's drafted sweeping protections against lawsuits for businesses, universities and other organizations. The powerful trial lawyers lobby -- which still holds great influence with Democrats -- is opposed, and McConnell's fears of a wave of covid-related lawsuits haven't materialized. Veteran Senate Judiciary Committee members Dick Durbin, D-Ill., and John Cornyn, R-Texas, have been deputized to negotiate the issue, a sign the talks are at a serious stage.

Sanders added of the absence of stimulus checks in the bill: "Tens of millions of Americans living in desperation today would receive absolutely no financial help from this proposal. That is not acceptable."

His opposition shows the tightrope negotiators are trying to walk as they seek to cobble together a bipartisan coalition with enough votes to pass the measure into law.

Numerous smaller items are ripe for inclusion, including $10 billion for the Postal Service, a $20 billion-plus deal adding food aid sought by Democrats and farm subsidies favored by Republicans, more than $100 billion in funding for schools seeking to reopen, along with funding for child care, Amtrak, transit systems and health care providers.

Information for this article was contributed by Andrew Taylor of The Associated Press; and by Jeff Stein, Mike DeBonis, Seung Min Kim and Eli Rosenberg of The Washington Post. 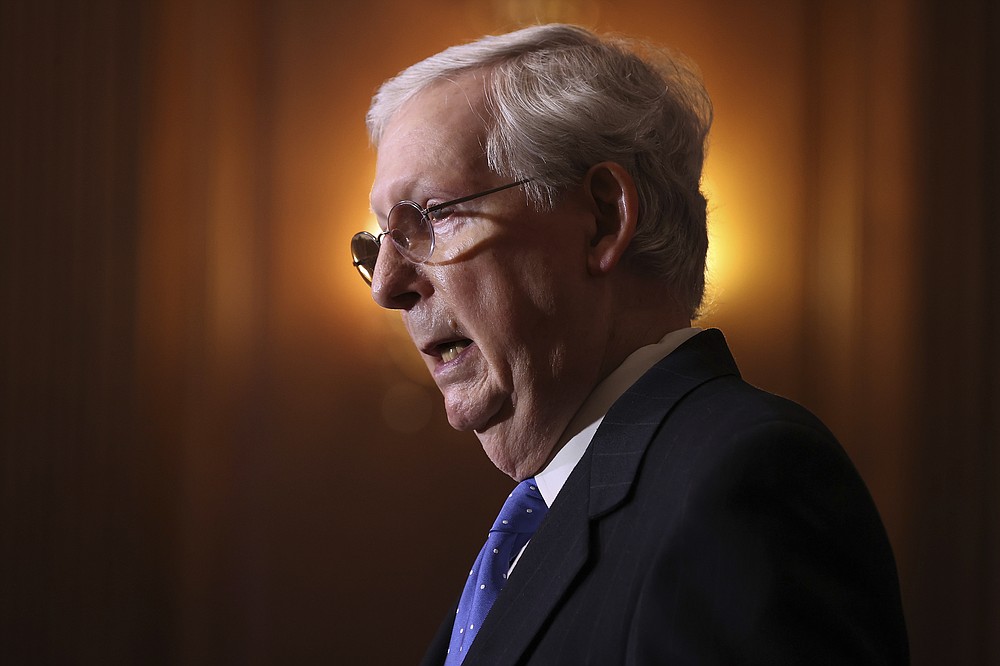 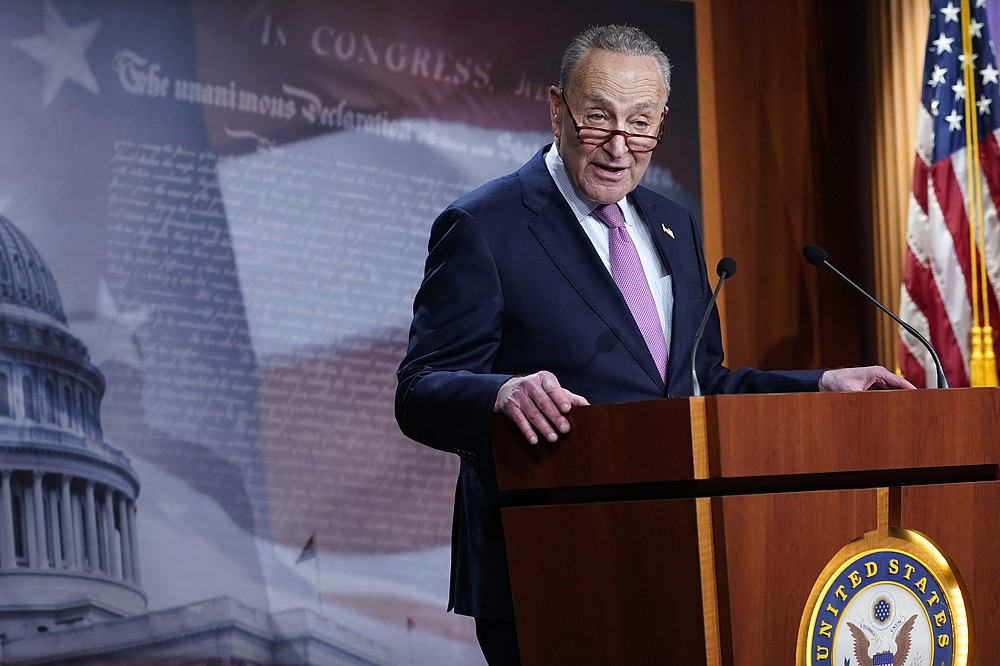 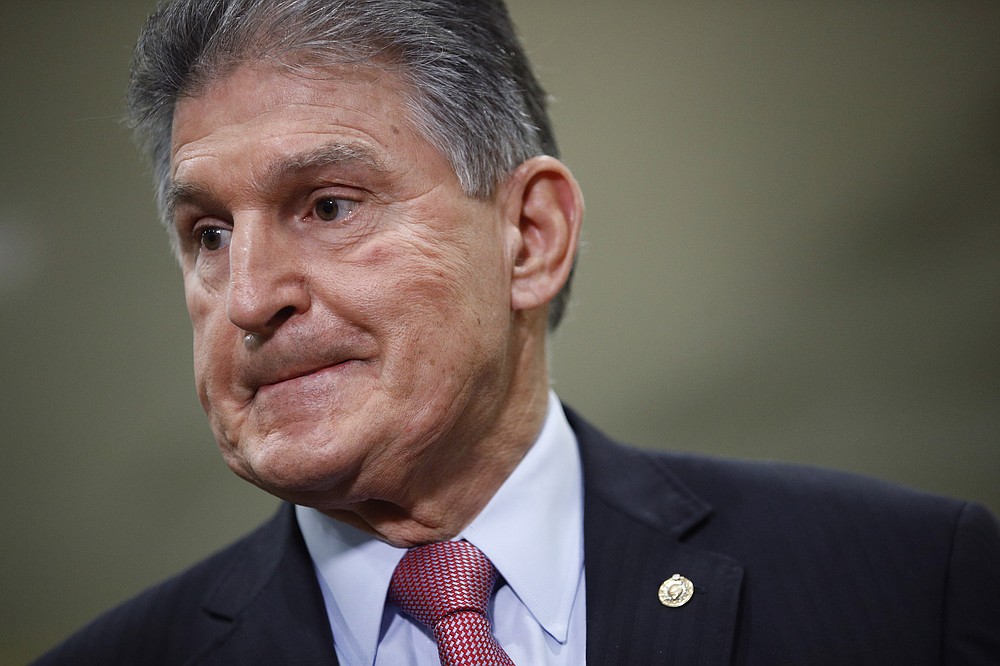 FILE - In this Feb. 5, 2020, file photo, Sen. Joe Manchin, D-W.Va., speaks with reporters on Capitol Hill in Washington. A bipartisan group of lawmakers, including Manchin, is putting pressure on congressional leaders to accept a split-the-difference solution to the months-long impasse on COVID-19 relief in a last-gasp effort to ship overdue help to a hurting nation before Congress adjourns for the holidays. (AP Photo/Patrick Semansky, File) 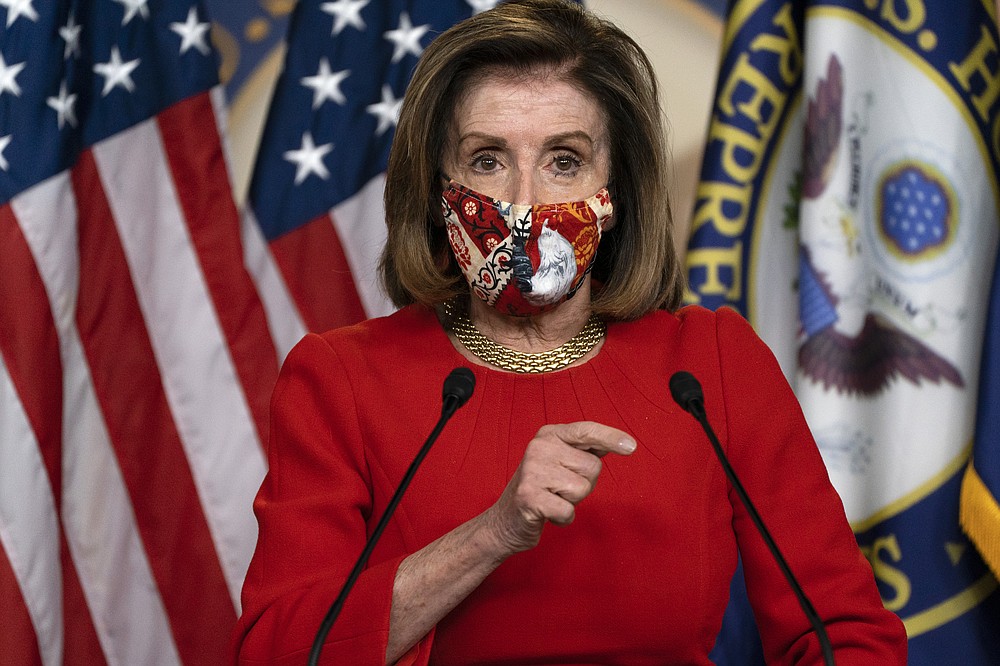 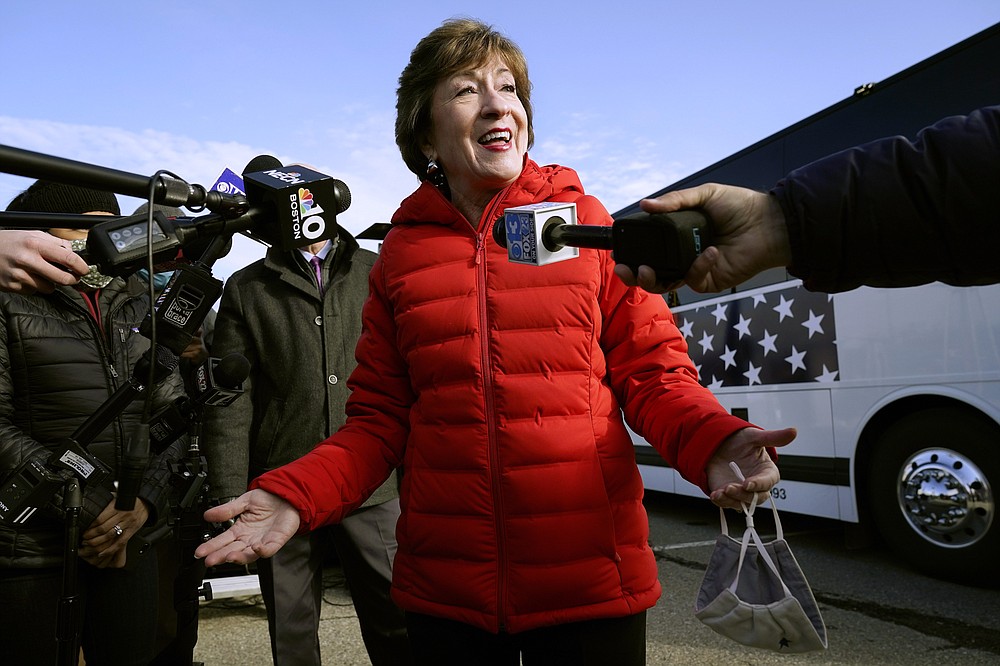 FILE - In this Nov. 4, 2020, file photo Republican Sen. Susan Collins, R-Maine, speaks to reporters in Bangor, Maine.A bipartisan group of lawmakers, including Collins, is putting pressure on congressional leaders to accept a split-the-difference solution to the months-long impasse on COVID-19 relief in a last-gasp effort to ship overdue help to a hurting nation before Congress adjourns for the holidays. (AP Photo/Robert F. Bukaty, File)