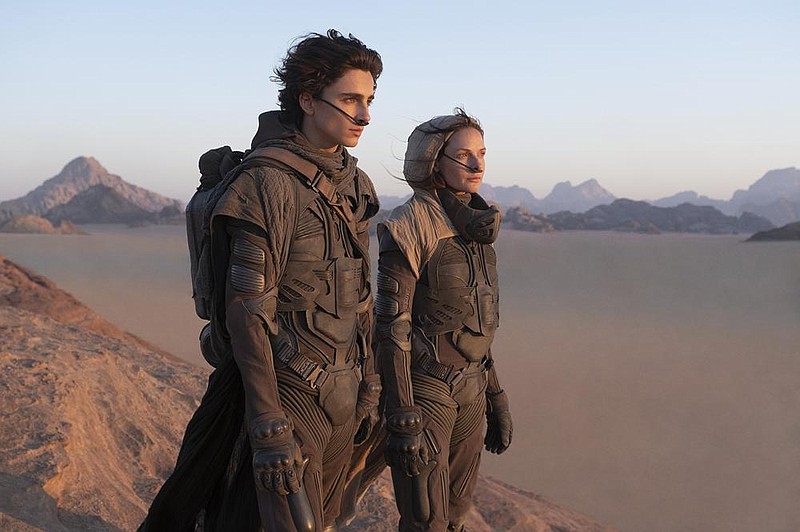 Timothee Chalamet and Rebecca Ferguson are shown in a scene from the forthcoming film “Dune.” Warner Bros. Pictures on Thursday announced that all of its 2021 film lineup will stream on HBO Max at the same time the movies play in theaters. (AP/Warner Bros. Entertainment/Chia Bella James)

Theater chains such as AMC Entertainment Holdings Inc. and Cinemark Holdings Inc. are firing back at Warner Bros. after the studio overhauled its film-release strategy.

Adam Aron, chief executive officer of AMC, said he opened up an "immediate and urgent dialogue" with the studio, which announced plans to have all its major 2021 movies debut on HBO Max and in cinemas simultaneously. Shares of AMC and Cinemark, already battered in 2020, each plunged more than 16% on Thursday.

Aron, who runs the largest theater chain, questioned why the studio would make such a decision when drug companies are on the verge of releasing a covid-19 vaccine. Cinemark, meanwhile, said Warner Bros. hadn't provided any details of its plan and signaled it might not show some of the studio's films.

"In light of the current operating environment, we are making near-term booking decisions on a film-by-film basis," Cinemark said.

The decision by AT&T Inc.'s WarnerMedia, which operates Warner Bros. and HBO Max, threatens to widen a rift in the movie business that opened up earlier this year. After theaters shut in March because of the coronavirus pandemic, studios were forced to either delay their movies or debut them online.

Theater owners have generally expressed a desire for studios to withhold new movies until cinemas can broadly reopen, preserving a decades-old release model that gave them exclusive rights. Studios already have delayed many of their biggest films, but they are wary of allowing ready-made blockbusters to collect dust until the pandemic ends.

AT&T also is trying to bolster HBO Max, a streaming platform that debuted in May. It had already planned to use the simultaneous-release strategy with "Wonder Woman 1984," which opens on Christmas Day.

Until this week, Warner Bros. has been one of the studios most closely aligned with movie exhibitors. It released the $200 million sci-fi thriller "Tenet" exclusively in cinemas in September, marking the only big-budget theatrical debut since the pandemic hobbled the industry.

After Thursday, the studio may be one of the most reviled.

"Clearly, WarnerMedia intends to sacrifice a considerable portion of the profitability of its movie studio division, and that of its production partners and filmmakers, to subsidize its HBO Max startup," Aron said in an emailed statement. "As for AMC, we will do all in our power to ensure that Warner does not do so at our expense."

Even after Warner Bros.' decision to release "Wonder Woman 1984" on HBO Max, the plan to adopt the same approach for the whole 2021 slate shocked the industry. In the case of "Wonder Woman," the studio discussed the decision with theaters ahead of time and offered them a greater cut of ticket sales in exchange for scrapping a traditional release. Typically, cinemas have exclusive rights to new movies for about 90 days.

Now new terms will need to be hammered out in potentially heated negotiations.

Theater chains still plan to play the new "Wonder Woman" film. Cinemark advertised tickets for the movie on social media Thursday. AMC also noted it had carved out a special agreement with Warner Bros. to play the DC Comic film. However, it's not clear whether they will show the studio's 2021 slate, including a new "Matrix" movie and "The Suicide Squad." The chains were counting on at least some of those films to draw in large crowds next year, helping them recover from the effects of the pandemic.

"Warner Bros. has not provided any details for the hybrid distribution model of their 2021 films," said Cinemark, the third-biggest U.S. chain.

Cineworld Group Plc -- owner of Regal, the second-largest U.S. chain -- has closed its theaters, aiming to save money as it rides out the pandemic. But the company expects to reopen theaters in the first quarter and hammer out a deal with Warner Bros.

"We are very encouraged by the giant steps achieved recently with regards to the covid-19 vaccination process, which is expected to be put in place earlier than previously anticipated," the company said in a statement. "This will generate significant relief for our industry and enable our cinemas to make a great comeback."

The company expects to reach an agreement with Warner Bros. at that time "about the proper window and terms that will work for both sides."

Imax Corp. CEO Rich Gelfond also said he was perplexed about why Warner Bros. chose to make a decision now about its entire 2021 slate. As vaccines are distributed over the coming months, U.S. theaters should gradually reopen, and larger crowds will again be allowed to form.

"The model of moving things to streaming during a pandemic makes sense," Gelfond said in an interview. "However, given how strongly the box office has rebounded in Asia and other parts of the world, moving everything for the whole year 2021 doesn't make much sense."