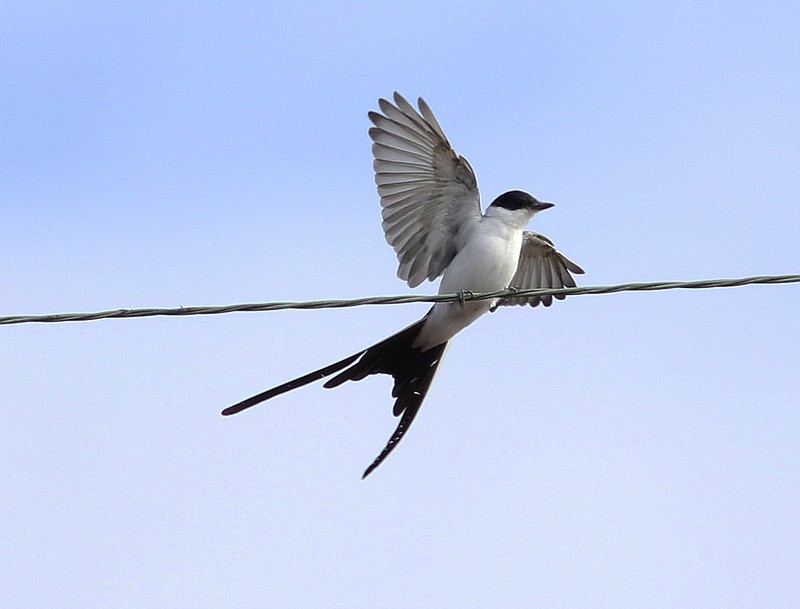 Only the second of its kind documented in Arkansas, this fork-tailed flycatcher (Tyrannus savana) was spotted in Desha County in November and early December. (Special to the Democrat-Gazette/Gary Graves)

A fork-tailed flycatcher is gobbling up grasshoppers, perching on a powerline and attracting avid bird-watchers to Desha County. Birders are flocking there to see this rare bird, which has been documented in the state only one other time.

This flycatcher (Tyrannus savana) is commonly a resident of southern Mexico, but it makes occasional appearances in maritime states of the lower United States. It shows up sporadically in south Texas and Florida. It has not been seen within the borders of the Natural State for more than 25 years, and there are no reports of it ever being here before 1995.

The spectacular fork-tailed bird prefers open fields with scattered weeds and bushes, according to David Sibley's "Guide to Birds,'' a National Audubon publication. It has found such an area to its liking along Arkansas 4, five miles north of Arkansas City. This individual bird has been regularly located and spotted for three weeks as it perches on utility lines running parallel to the highway within a couple of hundred yards either side of the location where Boggy Bayou runs under the bridge. It is in an agricultural area with large tracts of farmland and in easy smelling distance of the Clearwater Paper manufacturing plant. 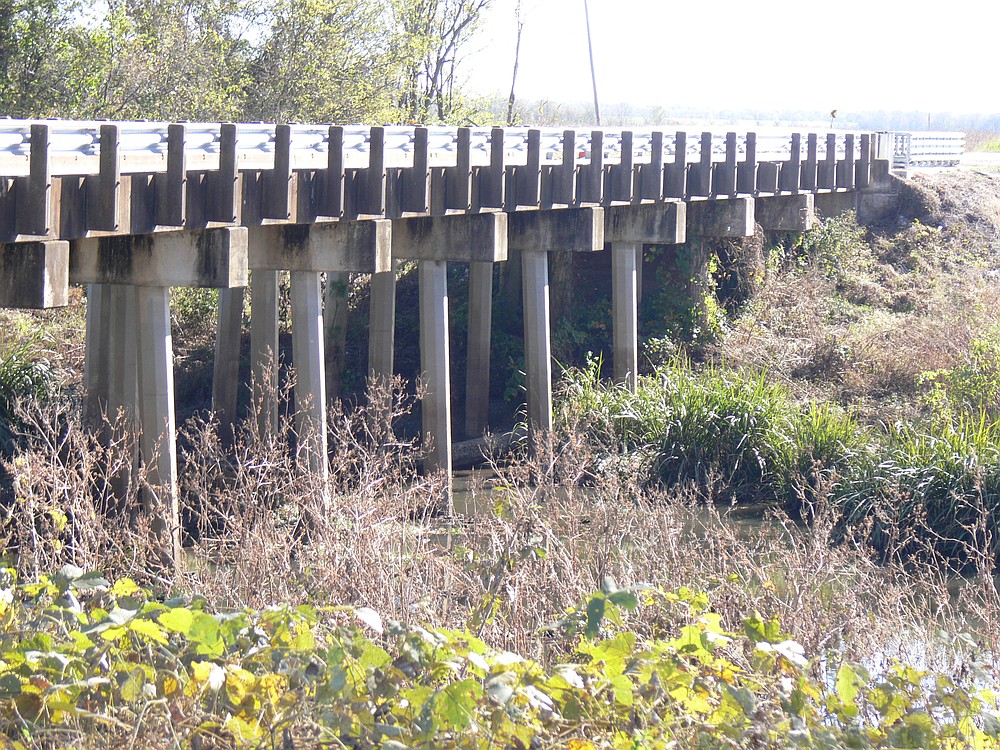 Within a few hundred yards to either side of the Boggy Bayou Bridge on Arkansas 4 in Desha County, a rare-to-the state fork-tailed flycatcher has been perching on power lines and feeding in the ditches since mid-November. (Special to the Democrat-Gazette/Jerry Butler)

Bird-watchers traveling to Desha County to see the fork-tailed noted that it was easily spotted against the bluebird skies of mid-November as it perched on wires overlooking fields and weedy ditch banks looking for insects.

In intervals of about 15 or 20 minutes, the bird alternates between scoping out an area and then diving in among the weeds and woody bushes to feed on insects. When it is feeding, it is much more difficult to see, as the grayish brown mottled feathers camouflage it from avian predators — and bird-watchers with binoculars.

Occasionally while feeding, it will pop up to sit on a stiff woody plant and could be recognized or photographed with a quick focusing camera. But, for the most part, during the feeding periods a birdwatcher can see only motion and can't distinguish the flycatcher from any sparrow or finch that might flit around in tall grass.

Walking among weeds near where the flycatcher was feeding, I found a great number of small green grasshoppers and concluded that they made up much of the bird's diet. There were also some pale, gnat-size moths and dark bees in the weeds. 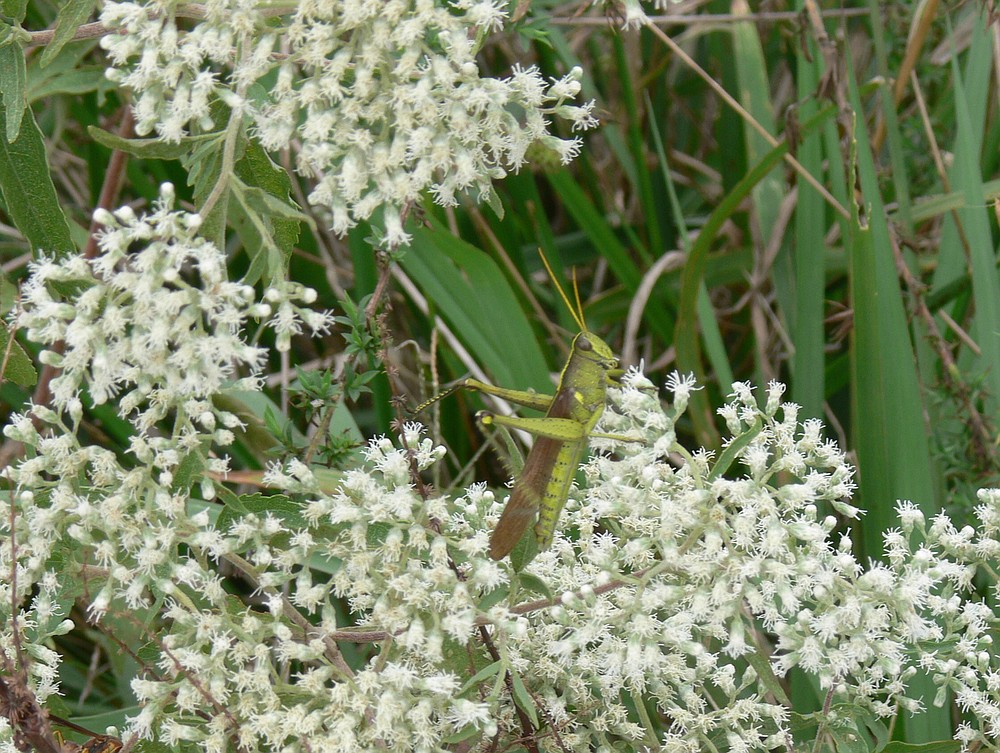 Small grasshoppers were abundant in the weeds where a rare fork-tailed flycatcher was seen feeding in November and early December 2020. (Special to the Democrat-Gazette/Jerry Butler)

THE BIRD IS THE WORD

Dick Baxter, who works for the Arkansas Game and Fish Commission monitoring duck populations and who has had an enviable track record of spotting rare birds, was the first to see the fork-tailed flycatcher.

His discovery was posted Nov. 16 to the birding community at large on ARBird-L, a bird discussion internet site. In the next few days as word of the finding spread, dozens of birders traveled to southeast Arkansas. Most of them reported success on ARBird. Some who could not see it in person commented on the flycatcher's migratory habits. Others recounted seeing the bird in Arkansas in January 1995.

I drove to Desha County from Hot Springs with Dr. John Simpson, who was one of only a dozen local investigators who secretly searched for the ivory-billed woodpecker in 2005 near Brinkley.

As we neared Dumas, we came upon a car with a personalized license plate that indicated the driver was a birder. We did not recognize him, but we tailgated when he pulled into a convenience store parking lot. Jim Nieting was driving from Fort Smith to photograph the bird. We shared maps and checked our GPS coordinates. All of us knew that the more sets of eyes you have looking, the greater your chances are of finding a single small songbird.

[RELATED: John James Audubon: In his words and artworks]

Nieting led our two-car caravan. We overshot our destination at first, but he spotted the bird sitting on a wire near a power pole before he even got out of his car.

We parked in a turnout on the south side of the Boggy Bayou Bridge and then walked along the shoulder of the road 150 yards to get a closer look without flushing the flycatcher. The sun was in our eyes, so we passed east of the bird from the other side of the road and then looked back.

The flycatcher flew up to the wires and down into the weeds about four times in the hour and a half we were there. Meanwhile, two cars of hopeful birders arrived. We were able to help Stephanie Sexton of Little Rock and Jane Wiewora of Searcy to find the bird.

While standing about, we saw killdeer, woodpeckers, bluebirds, an adult bald eagle and two phoebes. Phoebes are small birds in the flycatcher family with coloration and behavior similar to the fork-tailed. 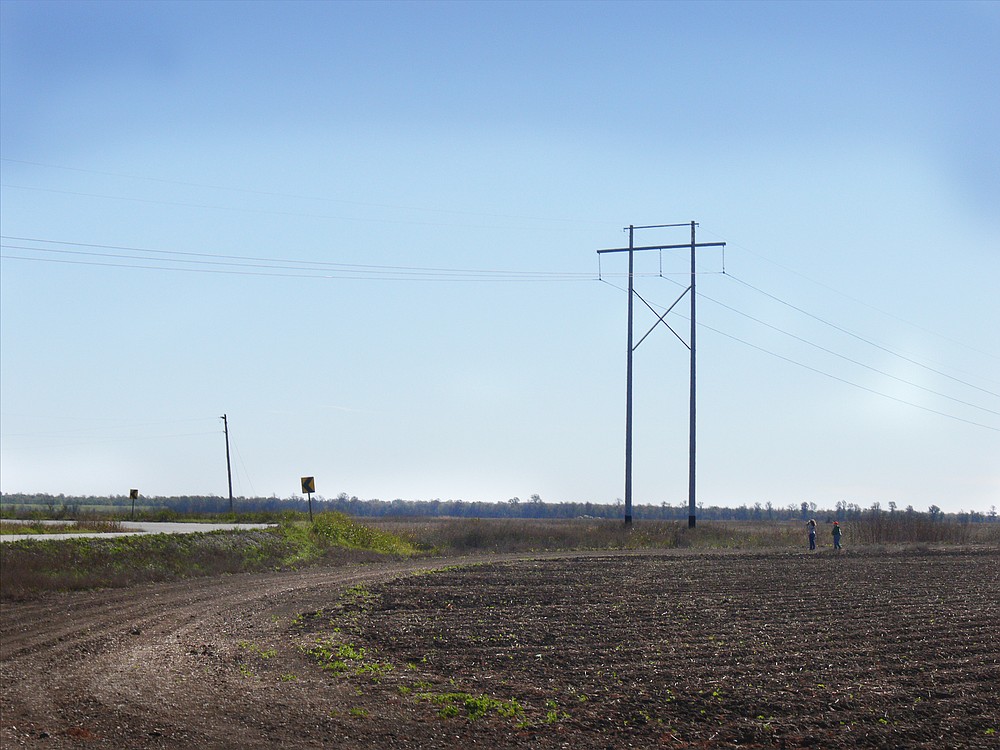 With Arkansas 4 to the left, birders walk down a turn row to see the rare flycatcher perched on power lines. (Special to the Democrat-Gazette/Jerry Butler)

Days after I was there, birders continued to visit. Glenn Good of Arkadelphia was one of nine people Nov. 27 who was "able to get good looks and lots of photos of the bird." Good posted on ARBird that the flycatcher was "in and around the large trees on both sides of the bridge. There were several eastern bluebirds that were constantly harassing the bird for a good part of the time we were there. As soon as it found a good spot to perch, the bluebirds would swoop in and make the bird move somewhere else."

I listened carefully but couldn't hear any flycatcher vocalizations. Whether this was because the bird was not singing or because large trucks were going back and forth the whole time, I cannot say. Other birders I talked to did not hear any twittering either. Sibley's field guide notes that the voice of the fork-tailed flycatcher is "rarely heard in North America." He describes the call as "high hard chips ... staccato, and hummingbird-like tik tik krkrkr."

The bird might not have been tweeting, but bird-watchers tracking it through social media and ARBird were. One of the most notable voices on ARBird was Joseph C. Neal. Neal is a retired professor of life science at the University of Arkansas and co-author of "Arkansas Birds: Their Distribution and Abundance." On ARBird he posted an excerpt from a never completed project begun in 2012 with the late Doug James and Kim Smith:

"The only occurrence of this tropical bird in Arkansas was from 14-17 January 1995 along Highway 154 approximately 5 miles west of Pontoon, Yell County. It was seen by many but the documentation form was prepared by William Shepherd accompanied by Brantly Buck, Ragan Sutterfield, and Jeremy Davis. This species strays across eastern North America, a result of migrants overshooting South America described by McCaskie and Patten (1994). Most of the strays are the subspecies T. s. savana that nests in southern South America and reach mainly eastern USA in late summer and fall when migration should be not northward, but southward to nest.''

Barry Haas, a Little Rock resident who has been active in the birding community for many years, posted Nov. 17 about his memory of the 1995 sighting. He described how in those "olden days," the Audubon Society of Central Arkansas would charter buses to take birders from Little Rock to Holla Bend National Wildlife Refuge.

"Someone would use the speaker system on the bus to alert everyone on the bus when we saw something worth viewing. ... At the end of an enjoyable day at Holla Bend, the bus headed north to I-40 while a private vehicle that included Bill Shepherd, Brant Buck, Ragan Sutterfield headed east on Highway 154. Not too long after they turned onto Hwy. 154 Ragan said he had seen a Fork-Tailed Flycatcher perched on a sign beside the road as I recall. Ragan at that time was about 15 years old, and something of a birding prodigy.

"The vehicle turned around, and sure enough, Ragan was right! Imagine that. Good eyes!

"For days birders from multiple states burned gas and heated the planet up some more so they could say they had seen the flycatcher. Check!"

After a cold front moved through the state, there were no more sightings of that flycatcher.

How long the 2020 fork-tail will remain in Desha County is anybody's guess. Until its departure, birders will be going to see it with regularity. If a couple of the trips turn up no fork-tail, they will post their disappointment and the trips will diminish. Then the birders will return to their customary hot spots to take pleasure in seeing their less rare but equally wonderful feathered friends.

Jerry Butler writes frequently about Arkansas birds and the people who enjoy them. Share your stories with him at 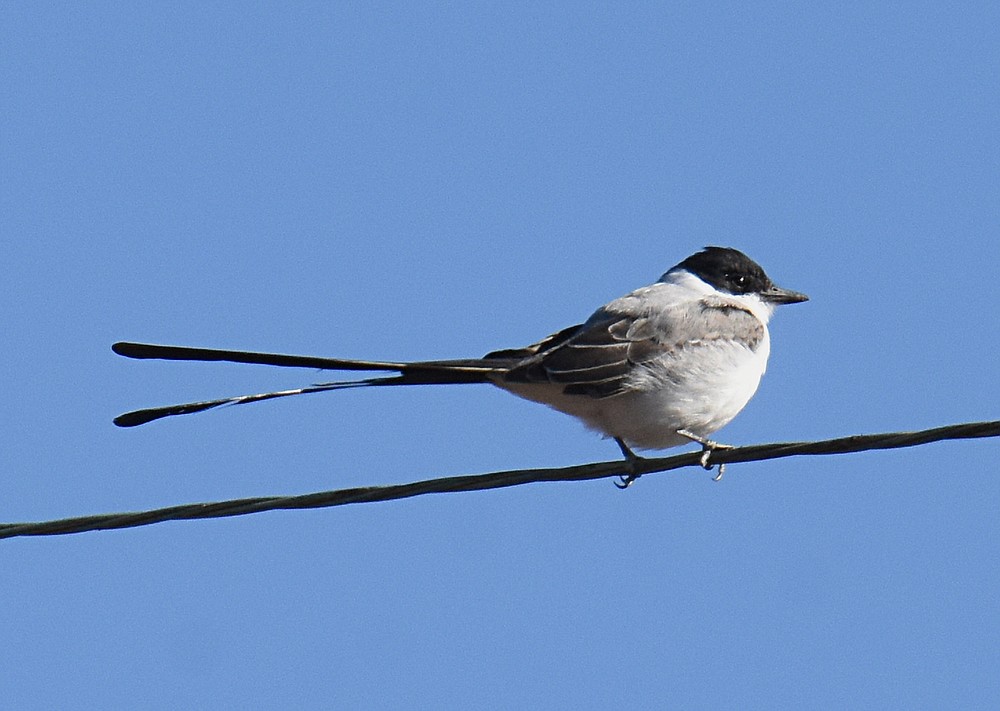