John James Audubon: In his words and artworks 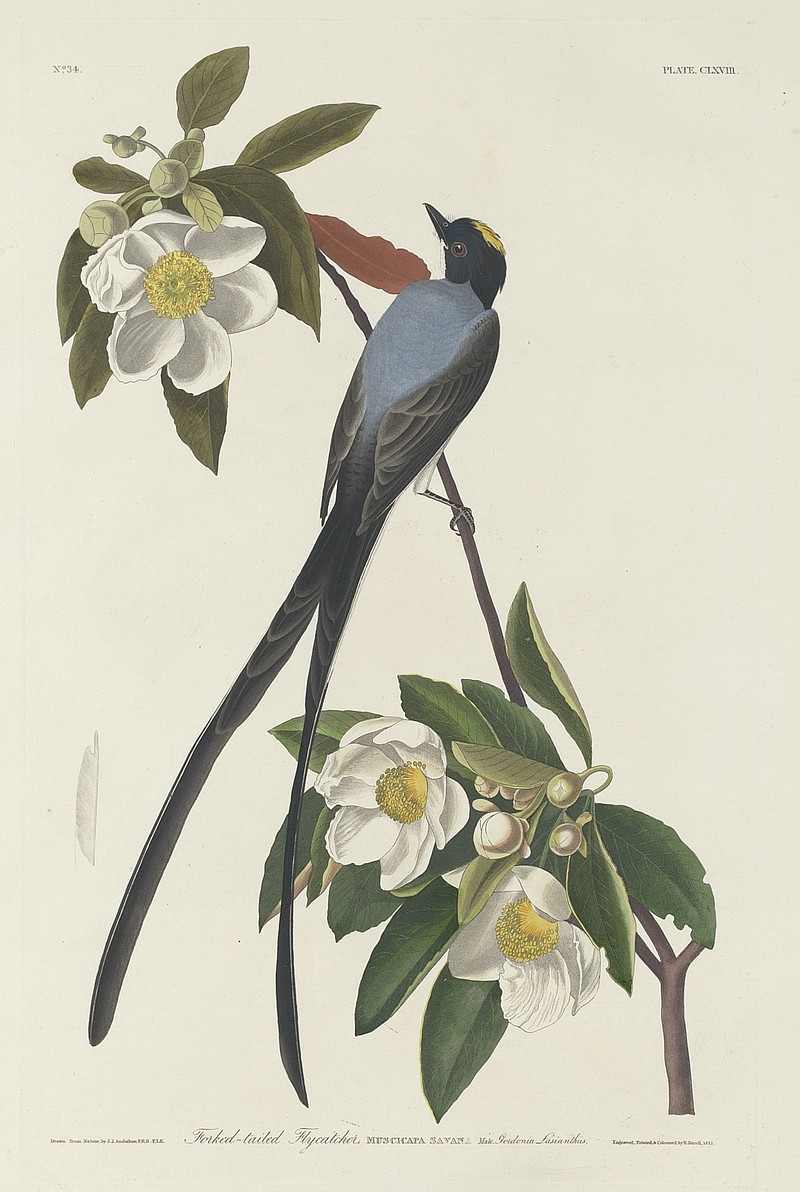 John James Audubon's classic artistic work "The Birds of North America" did not include his stories or scientific observations. For tax reasons, his writings about the birds he was painting were published in separate volumes that were not well-edited or widely distributed. They are not easily available to readers today.

Audubon was a good writer, a keen observer and a popular lecturer during his day, but his writings, diaries and scientific contributions have been overshadowed by his artistic achievements. What follows is an excerpt from his published comments about the fork-tailed flycatcher, along with my notes in brackets.

"In the end of June, 1832, I observed one of these birds [a fork-tailed flycatcher] a few miles below the city of Camden, New Jersey, flying over a meadow in pursuit of insects, after which it alighted on the top of a small detached tree, where I followed it and succeeded in obtaining it."

[As mortifying as this may sound to modern day Auduboners, this means he shot it with his fowling piece, a gun that he used to collect bird specimens.]

"The bird appeared to have lost itself: it was unsuspicious, and paid no attention to me as I approached it. While on the wing, it frequently employed its long tail, when performing sudden turns in following its prey, and when alighted, it vibrated it in the manner of the Sparrow-Hawk. [This bird today is called an American kestrel.]

"The bird fell to the ground wounded, and uttering a sharp squeak, which it repeated, accompanied with smart clicks of its bill, when I went up to it. It lived only a few minutes, and from it the drawing transferred to the plate was made. This figure corresponds precisely with a skin shewn to me by my friend Charles Pickering, at the Academy of Natural Sciences in Philadelphia, except in the general tint of the plumage, his specimen, which he had received from South America, having been much faded.

"Many years ago, while residing at Henderson in Kentucky, I had one of these birds brought to me which had been caught by the band, and was nearly putrid [there was no refrigeration in early 1800s] when I got it. The person who presented it to me had caught it in the Barrens, ten or twelve miles from Henderson, late in October after a succession of white frosts, and had kept it more than a week.

"While near the city of Natchez, in the state of Mississippi, in August 1822, I saw two others high in the air, twittering in the manner of the King-bird; but they disappeared to the westward, and I was unable to see them again.

"These four specimens are the only ones I have seen in the United States, where individuals appear only at long intervals, and in far distant districts, as if they had lost themselves. I regret that I am unable to afford any information respecting their habits."

Audubon did see them later in Florida, but since Florida was not a state until 1845, when this article was written he considered Florida a foreign country.

In Audubon's mixed media watercolor and chalk painting of the fork-tailed flycatcher, the bird is posed on a branch of a small tree recognized as loblolly bay. According to Eric Sundell, emeritus professor of botany from the University of Arkansas at Monticello, this plant (Gordonia lasianthus) is not found in New Jersey as the narrative attests, but it is indigenous to southern Florida where Audubon later saw the bird. It's likely he repainted the species then after he wrote these words.

A less likely scenario is that the bird was drawn early on and later Audubon, his son or an associate added the background, as sometimes happened. In that case, the painter of the background might have simply placed the bird in a more botanically correct habitat.