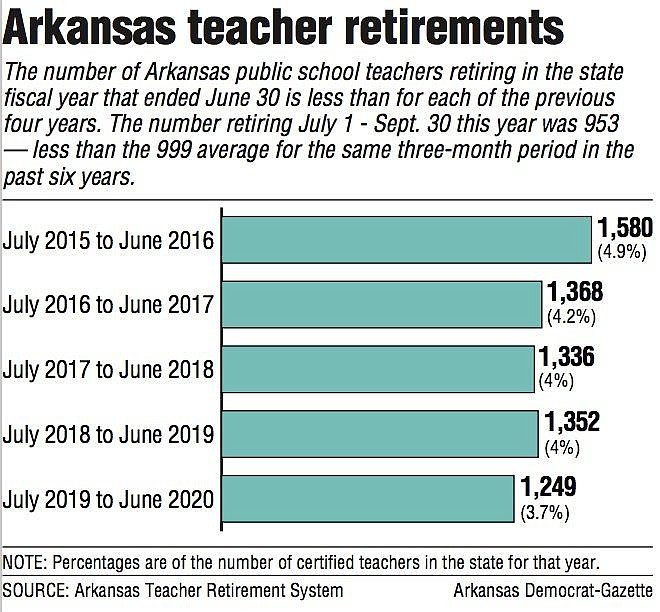 The system earned a return of 5.9% in the quarter that ended Sept. 30 to rank in the top 10% of its peers across the nation, Katie Comstock of Aon Hewitt Investment Consulting said.

"We are expecting a ... return July through the end of November for ATRS [the retirement system] of north of 13% as it stands today, so a very strong start to the [2021] fiscal year," she told the system's board of directors. Fiscal 2021 started July 1.

Since Sept. 30, the system's assets have increased to $18.2 billion as of Monday, system Executive Director Clint Rhoden said after the board of trustees meeting.

The substantial increase so far in fiscal 2021 comes on the heels of those investments dropping by $921 million to $16.6 billion in fiscal 2020.

In July, the system filed a complaint in federal court seeking to recover losses estimated at $700 million to $800 million that it claimed it incurred earlier this year as a result of negligence and breach of fiduciary and contractual duties by Allianz Global Investors U.S. LLC and related defendants. A spokesman for Allianz has called the system's allegations flawed and said the company would vigorously defend itself in court.

The system's target investment return is 7.5% a year.

In contrast, the average target investment return for public pension systems is 7.18% a year and the median target return is 7.25%, based on information from the National Association of State Retirement Systems, said Brian Murphy of the system's actuary, Gabriel, Roeder, Smith & Co.

During the past 10 years, the system's return has averaged 8.5% to rank in the top 10% of its peers, Aon Hewitt reported.

As of June 30, the system's liabilities totaled $22.3 billion and an actuarial value of its assets totaled $18 billion, so the system was 81% funded, Gabriel, Roeder, Smith & Co. reported to the trustees.

The unfunded liabilities totaled $4.34 billion, with a projected payoff period of 27 years as of June 30, according to Gabriel.

By comparison, the system had a 28-year projected payoff period as of June 30, 2019, said Judith Kermans of Gabriel.

"It is true we dropped a year, but in fact the investment performance on a market value basis was very bad, like many plans [in fiscal] 2020," she said.

"The reason why it doesn't look worse is because of the smoothing mechanisms that we have in place, which really helped this year," she said. Those mechanisms spread out recognition of gains or losses from each fiscal year over a four-year period.

Kermans said the system needs to record strong investment gains to make up for the losses the system will recognize in the next three years.

In fiscal 2021, employers pay 14.5% of payroll into the system, while working members contribute 6.5% of their salary.

They are among several measures the trustees approved in November 2017 to raise money and cut costs over seven years in response to reducing the target investment return from 8% to 7.5% a year.

In the quarter that ended Sept. 30, stock market investments earned a return of 8.9% to reach a value of $9.48 billion. Bond investments posted a return of 1.4% to end at $2.32 billion, according to Aon Hewitt.

Private equity investments had a return of 7.8% last quarter to end up valued at $2.51 billion, and real estate, timber, agriculture and infrastructure investments earned a return of -1.3% to reach a value of $2.09 billion on Sept. 30, the consultant reported.

Opportunistic and alternative investments earned a return of 2.1% to end the quarter at $874 million, Aon Hewitt reported.

The trustees approved changing the system's direct investment in Highland Pelletts LLC to a limited partnership. The company operates a wood-pellet manufacturing plant in the Pine Bluff industrial park near White Hall.

There are 34 Highland employees at the Pine Bluff plant and about 70 construction contractors working on plant upgrades, and Highland is expected to employ about 94 people when the upgrades are complete, he said.

Graves told trustees that the system's staff members have been working with legal counsel and Highland management to look for ways to simplify the investment structure.

"This restructuring could help make it more attractive for other investors to come in [and] ... add some capital that would allow ATRS [Arkansas Teacher Retirement System] to ... diversify and expand the footprint of that Highland plant and the one location in Pine Bluff to maybe some adjacent areas, or even areas in other locations," he said.

Graves said system officials believe this restructuring is the best way to diversify the investment without the system putting in more capital.

Monday's board meeting was the first for two new trustees -- Michael Johnson, a teacher in the Pulaski County Special School District, and Mike Hernandez, executive director of the Arkansas Association of Educational Administrators.