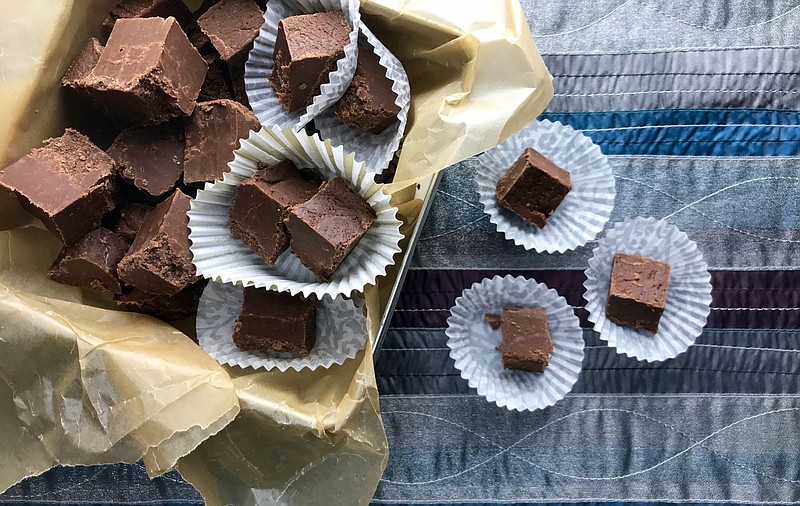 The great thing about fudge — aside from all that chocolate, sugar and butter — is that when you fudge it up, it still turns out pretty great.

The sought-after smooth, creamy, melt-in-your-mouth texture of traditional fudge is the result of precise timing and physical effort. The sugar mixture is heated to 237 to 240 degrees and then cooled to 110 before beating to create the proper texture and consistency. That smooth, creamy melt-in-your-mouth fudge texture is achieved with small sugar crystals. If the mixture is stirred too soon — when it is warmer than 110 degrees — the crystals will be large and make the fudge grainy.

And by stirring, I don't mean the lackadaisical twirling of a wooden spoon. Stirring fudge takes muscle.

Which explains the existence of easier, so-called foolproof fudge recipes. For the record, there's no such thing as a foolproof recipe. I won't disparage myself by saying I'm a fool, but I've definitely mucked up more recipes than I care to recall.

Most recently this one.

While it doesn't use the words "foolproof" or "no-fail" in its name, it does include an ingredient common to such fudge recipes: marshmallows.

I knew something was off as I poured it into the pan and noticed an unusual sheen, like it was greasy.

I'm fairly certain my mistake was cooking the mixture just a little too long. The instructions said to cook it to 234 degrees, which I did, but then I left the pan on the heat for another 30 seconds or so.

After letting the fudge cool for a bit I blotted it with a paper towel. Fortunately, it came off and didn't return. The fudge did turn out a little on the crumbly side (also the result of overheating), but it tastes fantastic and the texture — dense and creamy — is exactly what I wanted, so it's still a success in my book.

Add the chocolate and marshmallows and whisk until smooth and all of the marshmallows are completely melted. The fudge will thicken to the consistency of frosting. Stir in the nuts, if using. Pour mixture into the prepared pan. Let cool completely at room temperature, about 2 hours. Cover and refrigerate until set, about 2 hours more.

Using the foil overhang as handles, lift the fudge from the pan. Let fudge sit at room temperature for 15 to 30 minutes, before cutting into 1-inch cubes.

Fudge will keep in an airtight container for up to 2 weeks.

Recipe from "Everything Chocolate: A Decadent Collection of Morning Pastries, Nostalgic Sweets, and Showstopping Desserts" from America's Test Kitchen