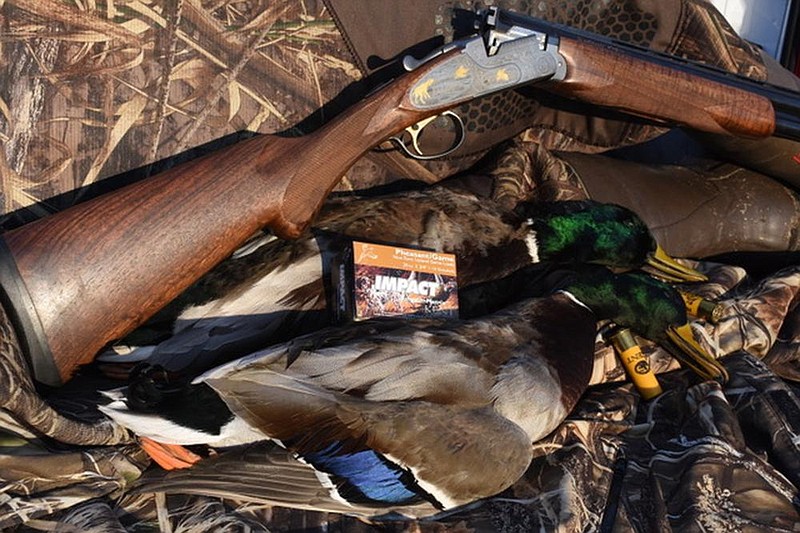 Flooded green timber is an ideal environment for hunting ducks with a 20-gauge and hard-hitting tungsten shot. (Arkansas Democrat-Gazette/Bryan Hendricks)

Arkansas duck hunters will end their withdrawal deprivation period Friday when the second segment of duck season begins across the state.

The second segment will end Dec. 23. The third and final segment runs Dec. 26 through Jan. 31.

Ducks are plentiful on private property that has food and water. State-owned wildlife management areas are still largely dry due to lack of rainfall. Find water and you'll find ducks. You'll also find other hunters, a lot of them.

According to the migratory bird hunting activity and harvest report published by the U.S. Fish and Wildlife Service, hunters killed more mallards in Arkansas than anywhere else during the 2019-20 duck season. No other state comes close.

During the 2019-20 waterfowl seasons, hunters in the Mississippi Flyway killed about 1.45 million mallards. We killed about 510,000 mallards in Arkansas, or about 35% of the total. That dwarfs the number killed in Minnesota (166,366), which was second.

In 2019-20 there were 75,400 active duck hunters in Arkansas, a significant increase over 60,700 duck hunters in 2018-19. That is noteworthy considering that nonresident duck hunters are limited to hunting only 30 days on state-owned wildlife management areas. This increase also occurred before the coronavirus pandemic.

Arkansas is the primary wintering ground for mallards. We've invested a lot of money and resources to welcome them. Arkansas is a high-priority area under the North American Wetlands Conservation Act, so the Arkansas Game and Fish Commission gets considerable amounts of money from the USFWS to acquire, conserve or enhance wetlands in our state. Most of our focal areas are in the Mississippi River Delta.

The White River, Cache River, Wappanocca and Bald Knob national wildlife refuges are major wintering areas for ducks, as are state-owned wildlife management areas. Bayou Meto WMA in Arkansas and Jefferson counties is the largest and most popular.

Rice is a primary factor in the waterfowl equation. We grow more rice in southeast Arkansas than anywhere else in the world. Ducks and geese love rice, but geese also descend on the vast acreage of winter wheat that farmers plant in the winter. That's one reason why Arkansas has quietly become a preeminent goose hunting destination.

Covering nearly 34,000 acres, Bayou Meto WMA is easily our state's most popular duck hunting area. It is only about an hour away from Little Rock, so it's accessible to a lot of people. About 17,000 acres flood annually, so there are a lot of places to hunt when water is present.

Ducks gravitate to different areas as new food sources become available, and that depends largely on water. Dabbling ducks prefer to feed in water that's about shin-deep, and they follow the rise. The Arkansas Democrat-Gazette publishes water levels every Thursday in its Outdoors section. Scouting will reveal whether and how ducks are using an area.

For specific hunting regulations for Bayou Meto and other WMAs, visit www.agfc.com.

Hunting the Arkansas River west of Little Rock is an entirely different experience than hunting flooded timber in eastern Arkansas.

For starters, you'll see a greater variety of ducks. A lot of mallards fly the river, but you'll also see pintails, redheads, bluebills, ringnecks and even canvasbacks.

Vast sand flats off the main channel contain grassbeds and interior bays where ducks feed and loaf. There are also flats and cattail marshes off the secondary creek channels that attract a lot of ducks.

For the adventurous, there remain hidden pools, ponds and marshes that used to be part of the river's braided channel before the McClellan-Kerr Navigation System began transforming the river into a ditch. These little pools almost always hold ducks.

The Arkansas River, including Lake Dardanelle, is also a prime place to kill Canada geese. Resident Canadas live all around Piney Bay, Delaware Bay, Spadra Creek and the area near Lake Dardanelle State Park. They roost on the river and fly in the mornings to feed on private farmland. You can sit on a point of almost any island and shoot a limit. Right about now, Canada geese migrating from the north arrive in the Arkansas River Valley, swelling the population and creating additional hunting opportunities.

The Cache River NWR begins just north of Clarendon, near the confluence of the Cache and White rivers. It stretches north and covers 67,000 acres almost to Newport. Together they comprise some of the largest contiguous tracts of bottomland hardwoods remaining in the Delta.

In the winter, the rivers overflow their banks into their respective floodplains. Ducks flood into the area at that time, creating some of the best duck hunting in the world. Mallards are prevalent, but you'll also see a lot of wood ducks.

This is big, wild and remote country, and it is easy to get lost in a world of flooded timber. Know where you're going and how to get back. Take a map, compass and GPS.

There are many other areas around the state that offer great duck hunting, too. Dave Donaldson Black River WMA near Augusta is one of our best, and Dagmar WMA near Brinkley is excellent at times, too. Other Delta Hotspots include Henry Gray Hurricane Lake, Shirey Bay Rainey Brake.

In south Arkansas, Felsenthal NWR and Beryl Anthony Lower Ouachita River WMA are excellent. Trusten Holder WMA has some excellent spots for those willing to explore.