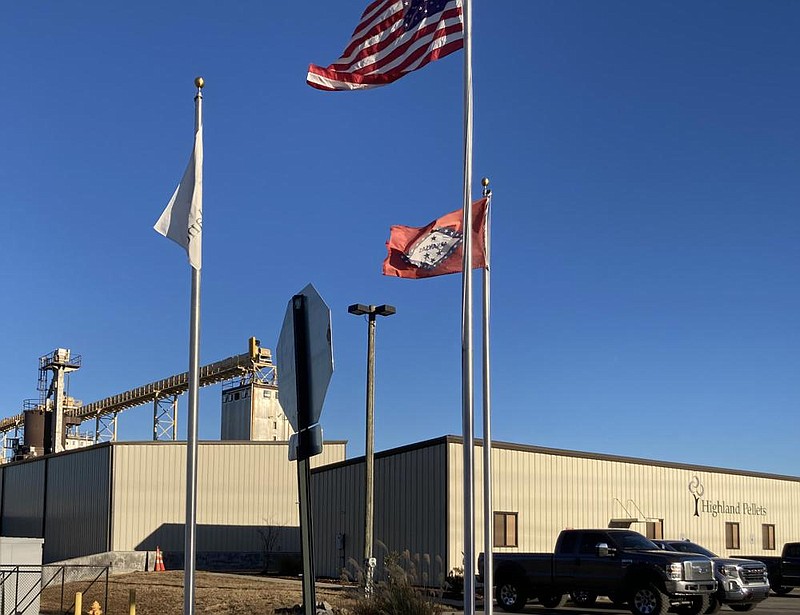 The Highland Pellets’ plant is undergoing an expansion with the assistance of a $163 million capital partnership with Orion Energy Partners, an energy investment company with offices in New York City and Houston. (Pine Bluff Commercial/Byron Tate)

Highland Pellets LLC, a wood pellet producer, has announced a strategic alliance with Orion Energy Partners LP to fund an expansion and upgrade of its plant in Pine Bluff and to provide capital for long-term growth initiatives, according to a joint news release from the two companies.

Orion, based in New York City and Houston, Texas, is a private capital partner to lower/middle market energy infrastructure and related companies, and is providing a $163 million capital investment to fund the expansion and upgrade.

"We are pleased to partner with Highland to expand the Pine Bluff facility and provide a sustainable fuel source to support the global renewable fuels market," said Ethan Shoemaker, head of the Houston office for Orion Energy in the press release. "Tom [Reilly] and his dedicated team have worked relentlessly to execute their plan and we are excited to collaborate at this transformational stage."

Tom Reilly is chairman of Highland Pellets, which supplies wood pellets for export where the fuel is used for renewable energy production at converted coal power plants. The Highland facility was completed in 2017 and is currently undergoing equipment upgrades to improve operational performance and increase production capacity.

According to the release, Highland uses sustainable fiber resources for its wood pellets consisting of trees that are not suitable for the lumber market due to size or quality. The wood may have come from trees that were thinned from crowded forests or from leftover material from local sawmills. Once the expansion is complete the plant will support more than 90 jobs directly in the plant and an additional 330 or more jobs in adjacent forest industries and the supply chain.

In an interview Wednesday, Reilly and Jeff Vanderpool, CEO of Highland Pellets, gave an overview of what the expansion means in real terms to the company.

"It's as much a retooling as anything," said Reilly. "It is a retooling but we're also adding world class equipment in regards to drying systems and that's just a very expensive proposition."

Reilly said the company will increase that production by 15%, from 600,000 metric tons to 675,000 metric tons, and will add an additional 60 employees to the plant itself by the time the upgrade is completed in March.

Vanderpool pointed out that the overall economic impact doesn't just include the permanent employees who will eventually be hired, but is ongoing with the construction that is currently underway.

"If we have 34 now and we're going to 94, that ramp up, I would say, will be pretty steady between now and the end of Q1," Vanderpool said. "The construction component is going to grow between now and then as well. We have about 100 contractors right now, but by the time we finish, the projected total number of contractors on site will be pushing 200."

Reilly said the company's intent is not just to expand its reach in the U.S. but to expand to global markets. He said Arkansas is well situated to take advantage of the growing global interest in wood pellets for energy production.

"South Arkansas has a really underutilized resource in its forestry industry," he said. "We've got the workforce, we've got the natural resource, and we have the de-carbonization of a lot of countries around the world like Japan, the [United Kingdom], all of the [European Union], and you know, wood pellets perform a really important function in the displacing of coal."

Reilly said a big advantage of wood pellets over coal is that the front end retooling of coal fired power plants can convert those plants to wood energy, which he said is not only renewable, but far less polluting than coal. He said the hammer mills that are used to pound coal into coal dust are replaced with hammer mills designed to pound wood pellets into sawdust. That conversion, he said, allows existing coal-fired plants to convert to wood energy instead of having to build a new plant from the ground up.

"Instead of spraying in coal dust, you're spraying in sawdust," he said. "The thing about sawdust is you aren't digging up dinosaur bones; you've got a renewable resource that in south Arkansas, comes up in 12 to 14 years."

Reilly said wood is not only renewable, but leaves behind far less toxic waste than coal, which not only lowers the environmental impact, but makes it less costly overall.

According to publication by the U.S. Energy Information Administration, using biomass fuels, such as wood pellets, has both positive and negative effects, some of which are dependent upon forest management methods.

Biomass and biofuels made from biomass are renewable alternative energy sources to fossil fuels--coal, petroleum and natural gas, the publication said. Burning either fossil fuels or biomass releases carbon dioxide, which is a greenhouse gas. However, the plants that are the source of biomass for energy capture almost the same amount of carbon dioxide through photosynthesis while growing as is released when biomass is burned, which can make biomass a carbon-neutral energy source, the Energy Information Administration said.

Reilly maintained that comparisons between coal and wood indicate that wood is the much better choice for energy production for a number of reasons.

"In terms of the environmental impact it doesn't even come close," he said. "When you burn something in your wood pellet stove or even in an industrial application like a power plant converted to biomass, it's the same thing as a log rotting in the forest except it happens much quicker.

"When you factor in the cost of getting this biomass to its destination," Reilly continued, "we're still 85% better than if you were to burn coal. And the fact that it renews every year is just a bonus."

He said that other forms of energy production, such as natural gas or nuclear, require huge investments in new power plants rather than re-purposing of existing plants but that converting to wood energy for power generation allows the use of existing infrastructure at a lower cost than building a power station from the ground up.

Also, he said the generation of power using a wood-fired plant provides a more consistent source than wind or solar.

"That's what we call an intermittent source of power because if the sun doesn't shine or the wind doesn't blow, you can't turn on your lights," he said. "We're only starting to hear about this in the United States, but in Europe they have these carbon requirements that by 2035 they're going to zero carbon."

He said wood power isn't intended to replace wind or solar as an environmentally-friendly power source, but to augment those sources for more reliable power generation, and to do so while providing jobs directly related to power production as well as adjunct jobs related to the supply chain.

"Everyone, if you could wave a magic wand and just have solar or wind power at any time day or night, no one would have a problem with it," Reilly said. "But again, the wind doesn't always blow and the sun doesn't always shine, but you have to balance the grid during those times. It's called baseload power instead of intermittent, and baseload power from a renewable resource like wood pellets can be a godsend to south Arkansas where you have folks farming trees but they don't have enough of a market for their product."