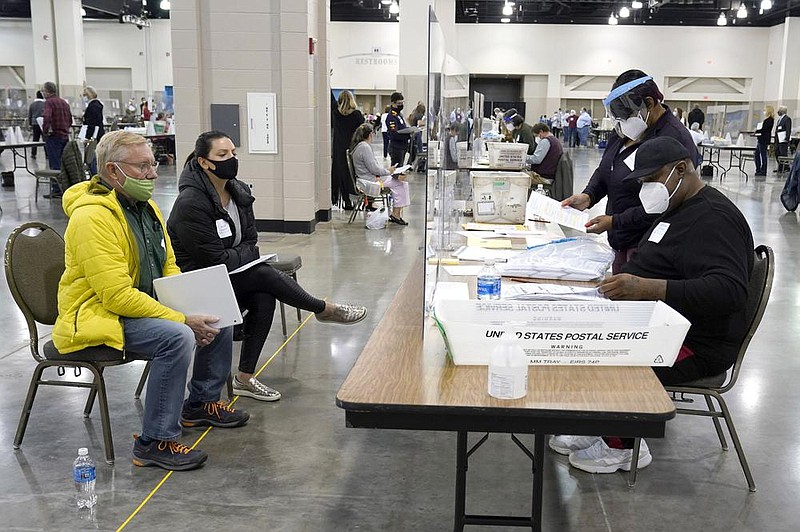 MADISON, Wis. -- A federal judge Thursday cast doubt on President Donald Trump's lawsuit that seeks to overturn President-elect Joe Biden's win in Wisconsin, declaring it "incredible" that Trump didn't raise the issues before the election and that siding with him would be "the most remarkable ruling in the history of this court or the federal judiciary."

Trump is pursuing attempts to overturn Biden's win with a pair of lawsuits in Wisconsin, in federal and state courts. In the state case, Trump wants to disqualify more than 221,000 ballots, and in the federal case he wants to give the GOP-controlled Legislature the power to name Trump the winner.

U.S. District Judge Brett Ludwig, a Trump appointee, said Thursday that he hoped to rule in the next couple of days.

Trump's attorneys are urging the courts to act quickly so he can appeal any adverse ruling before members of the Electoral College meet Monday and cast Wisconsin's 10 votes for Biden.

"It's not lost on me that this is a political case, obviously, and that the relief that's been requested, if that relief were granted, this would be a most remarkable proceeding and probably the most remarkable ruling in the history of this court or the federal judiciary," Ludwig said.

[Video not showing up above? Click here to watch » https://www.youtube.com/watch?v=Y13MNNHgei8]

The judge had previously called the Trump request "bizarre" and "very odd." On Thursday, he asked Trump's attorneys why the lawsuit wasn't filed before the election.

"The response that I heard today was the plaintiffs had too much going on, they couldn't pay attention to what issues were being raised in the state of Wisconsin," Ludwig said. "That strikes me as incredible."

Trump attorney Bill Bock said some of the issues they were challenging, such as the installation of ballot drop boxes, didn't happen until mid-October.

"These are last-minute changes that could not have been addressed," Bock said.

Bock argued that the election wasn't run properly and that the risks of voter fraud were increased because ballot drop boxes were not staffed, voting by mail was widely used and voters who said they were indefinitely confined were allowed to cast absentee ballots without showing a valid photo ID.

"In what area of American life is it more important that the rules be followed and the playing field be level than in an election for president of the United States?" Bock said.

Jeff Mandell, attorney for Democratic Gov. Tony Evers, said the request to overturn the election was unheard of, without merit, and should be dismissed.

"What President Trump seeks here is profoundly anti-democratic and unconstitutional," Mandell said. "This court should reject it."

Attorneys for Evers and the Wisconsin Elections Commission also asked Ludwig to dismiss the case on the basis that it belonged in state court, not federal. Ludwig called that issue "very challenging, interesting and unique."

Biden won Wisconsin by about 20,600 votes. Those certified results, which came after a Trump-ordered recount in the state's two largest Democratic counties, were then challenged by Trump in the two lawsuits he filed in Wisconsin.

Of the roughly 50 lawsuits filed nationwide contesting the Nov. 3 vote, Trump has lost more than 35 and the others are pending, according to an Associated Press tally.

On Wednesday, a federal judge in Wisconsin dismissed another lawsuit filed by the chairman of the La Crosse County Republican Party that argued there was widespread fraud that warranted the court declaring Trump the winner. Similar lawsuits, all filed by former Trump campaign attorney Sidney Powell, have been dismissed in Arizona, Georgia and Michigan.

A hearing in Trump's state lawsuit, originally scheduled for Thursday, was pushed until today because the arguments in federal court had not concluded. Noting the imminent Electoral College vote, Judge Stephen Simanek said the hearing will happen today, come "hell or high water."

Meanwhile, Texas filed a lawsuit with the U.S. Supreme Court that seeks to overturn the election results in four other states carried by Biden.

A case filed directly to the court this week by Texas Attorney General Ken Paxton contending that state officials in Pennsylvania, Georgia, Michigan and Wisconsin unconstitutionally expanded mail-in voting has been hailed as a game-changer by the president, who tweeted Wednesday that it was "the big one" that "everyone has been waiting for."

"At core, Texas is recycling legal claims that have already failed, but through a lawsuit that suffers from a whole host of additional procedural problems," said Lisa Marshall Manheim, a constitutional and election law professor at University of Washington School of Law in Seattle.

Texas claims its voters' constitutional rights are being violated by the election-rule changes in the other four states. The suit asks the court to block those states from casting their collective 62 electoral votes for Biden and order their Republican-controlled legislatures to appoint either new electors or none at all. Either option would require the justices to cast aside votes of states with a combined population of nearly 40 million people.

The Trump campaign and its allies have made similar claims before: that state officials, rather than legislatures, unconstitutionally changed election processes. Judges, including a number appointed by Trump, have rejected those arguments. Several said that, even if some violation were found, the remedy of disenfranchising millions of voters is unthinkable and would be a far greater constitutional violation than those alleged in the election challenges.

"After significant consideration we believe that the case could have unintended consequences relating to a constitutional principle that the state of Wyoming holds dear -- that states are sovereign, free to govern themselves," Gordon said in a statement.

Wyoming supports Texas' right to raise issues involving the U.S. Constitution, and Trump has a right to bring electoral issues for resolution in the U.S. judicial system, Gordon said. However, Texas didn't ask Wyoming to join the lawsuit and didn't provide notice that could have given it time to "thoughtfully consider" the states' brief before it was filed Wednesday, Gordon said.

Wyoming will weigh in on the case should the Supreme Court agree to hear it, Gordon said.

Gordon responded to the letter by asking Wyoming Attorney General Bridget Hill to look into the case filed in Texas, the Casper Star-Tribune reported.

A majority of House Republicans, however, have signed onto an amicus brief in the Texas lawsuit, including Arkansas Reps. Bruce Westerman of Hot Springs and Rick Crawford of Jonesboro.

Rep. Mike Johnson, R-La., head of the conservative Republican Study Committee, spearheaded the effort to round up support on Capitol Hill. Johnson emailed all House Republicans on Wednesday to solicit signatures for the case after Trump called. The congressman told his colleagues that the president "will be anxiously awaiting the final list to review."

Information for this article was contributed by Scott Bauer and staff members of The Associated Press; by Greg Stohr and Christian Berthelsen of Bloomberg News; and by Felicia Sonmez of The Washington Post.