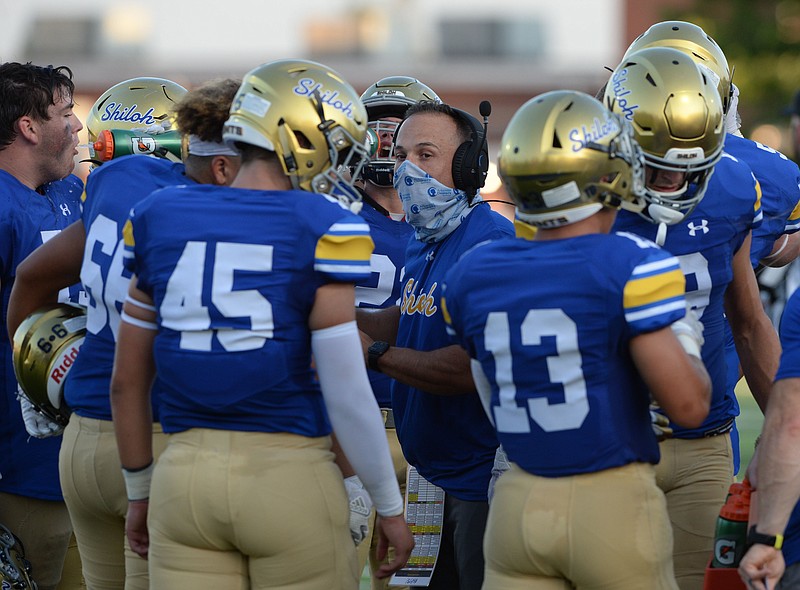 FILE -- Shiloh Christian coach Jacob Gill speaks to his team Friday, Aug. 28, 2020, during the first half of play against Pea Ridge at Champions Stadium in Springdale. (NWA Democrat-Gazette/Andy Shupe)

Shiloh Christian fans are likely aware the football program at Warren has produced a long list of talented players that includes Treylon Burks, the star receiver for the Arkansas Razorbacks.

But did you know three players from Stuttgart -- Kerry Owens, Odis Lloyd, and Reggie Hall -- started at linebacker for an Arkansas team that went 10-2 and won the Southwest Conference championship in 1988? Oh, and please note that Stuttgart is 12-0 this season, including a 36-0 victory over Warren, which faces Rivercrest in the other semifinal game in Class 4A.

Stuttgart will be the best opponent by far to play at Champions Stadium this year when the Ricebirds challenge 11-1 Shiloh Christian for the right to advance to the Class 4A state championship game next week at War Memorial Stadium in Little Rock.

Much was expected this season from Stuttgart, which was predicted to win the 4A-2 Conference after finishing 1-9 with a young team in 2019. The Ricebirds have delivered with standout defenders like linebackers Merritt Coker and Bryer West and a pair of dynamic sophomores in brothers Cedrick and Kameron Hawkins. Cedrick Hawkins displayed his big-play ability with a 74-yard touchdown run in the fourth quarter of last week's win over Ozark.

Fans expecting an offensive shootout at Champions Stadium tonight may be disappointed because both teams play very well, defensively. Juniors Kaden Henley and Ben Baker along with sophomore Thomas Reece led the charge last week when the Saints forced three turnovers in a 31-12 victory over Dumas. The win followed playoff victories over DeWitt (48-12) and Malvern (28-0).

Shiloh Christian is always dangerous on offense with rugged Cam Wiedemann at running back and sophomore Eli Wisdom, who ran for 134 yards and three touchdowns last week, at quarterback for the Saints.

Shiloh Christian fans yearn for another trip to Little Rock after the Saints lost to Joe T. Robinson in the Class 4A state championship game last December. But the coaching staff at Shiloh Christian will make sure the Saints are focused entirely on Stuttgart, a proud program from the rice fields of southeast Arkansas that commands respect.

Anything less and Shiloh Christian will turn to basketball like every other team in Northwest Arkansas.