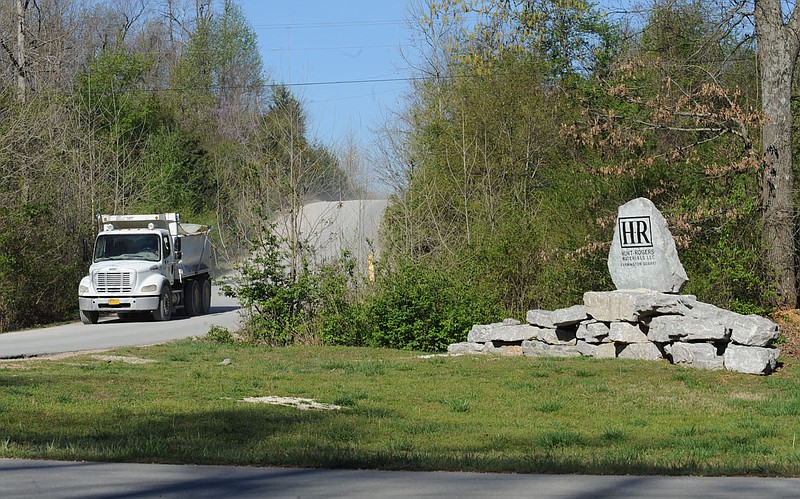 In this file photo a dump truck makes it way out of a limestone quarry past a sign for the Hunt-Rogers Materials' Farmington quarry on Hamestring Road. (NWA Democrat-Gazette/ANDY SHUPE)

FAYETTEVILLE -- A proposed expansion of the Hunt-Rogers Quarry in northeastern Washington County was tabled Thursday by county planners.

The Washington County Planning Board spent almost two hours discussing conditions that might be applied to the permit before deciding to table the matter until its Jan. 14 meeting to give the planning staff and the applicant time to continue working out the details.

The board members were most concerned about the open-ended nature of the conditional use permit since the Hunt-Rogers group has said the expansion would provide room for the quarry to operate for up to 50 years. The board also discussed how the conditions attached to the permit might be enforced.

"There's really no control to this," board member Neil Helm said during the discussion. "There's no teeth or enforceable points."

The quarry expansion proposal has been pending before the Planning Board since the board's Jan. 23 meeting when the request for a conditional use permit was heard and tabled. The request was tabled again at the Board's Nov. 5 meeting to allow time for the conditions of approval discussed at that meeting to be formalized. Thursday's meeting was another hearing on the conditional use permit request.

The Hunt-Rogers Quarry is on Parsons Road east of Springdale. The proposed expansion will add about 150 acres to the mining area and another 29 acres for stockpiling material from the quarry operation. The entire parcel is about 238.5 acres, according to information from the planning office.

According to information presented by the planning office, the quarry began operating in 2003, before the county adopted planning and zoning requirements in 2006. A permit for the operation was approved in 2012.

The Hunt-Rogers group has been seeking approval of plans to expand the quarry operation for some time. The initial request was tabled in January after neighbors objected to the plans, citing damage to their homes and declining property values if the expansion was approved.

The neighbors also raised concerns about noise, dust, heavy truck traffic on the narrow roads in the area and possible pollution of Beaver Lake.

For the January 2020 meeting, according to information from the planning staff, notice of the public hearing on the permit was mailed to 202 neighboring property owners and 113 of those notified returned comments opposing the plan. For the November meeting, the planning staff said, 225 notification letters were sent out and a number of additional comments opposing the permit were received. No comments in favor of the expansion were received, according to the staff report.

At Thursday's meeting Greg Gough spoke for a group of 62 area residents who signed a petition opposing the quarry expansion. Gough said the neighbors aren't willing to put their trust in the company's promises, calling on the board to have the conditions set down in detail.

"If all these things aren't written down now there's no guarantee any of them are going to be followed in the future," Gough said.

Andrew Effinger, assistant general counsel for Hunt-Rogers, said the group is willing to set aside an area as a preservation easement and to establishing a buffer of trees on ridges between the quarry and the residential area to the east. Effinger said the nature of the mining operation makes it difficult to say when mining may need to shift from one area to another so any rigid phasing isn't feasible.

Effinger also said the group is willing to have some kind of monitoring as part of the permit, either through annual inspections or setting up an ombudsman program so there will be someone designated to hear and investigate complaints or concerns of neighbors.

The board had asked Nathan Crouch, the county's planning director, to work on the conditions for the permit that have been discussed. Those conditions include incorporate the agreements for the conservation easement and a monitoring program using an ombudsman. Other conditions include providing neighbors with notice of planned blasting at the quarry, evaluating noise levels and implementing measures to reduce noise from the operation, adjusting the hours of operation to a schedule mutually agreeable to the quarry operation and the neighbors, and working with Benton and Washington counties on a "patch and repair" program for roads in the area.