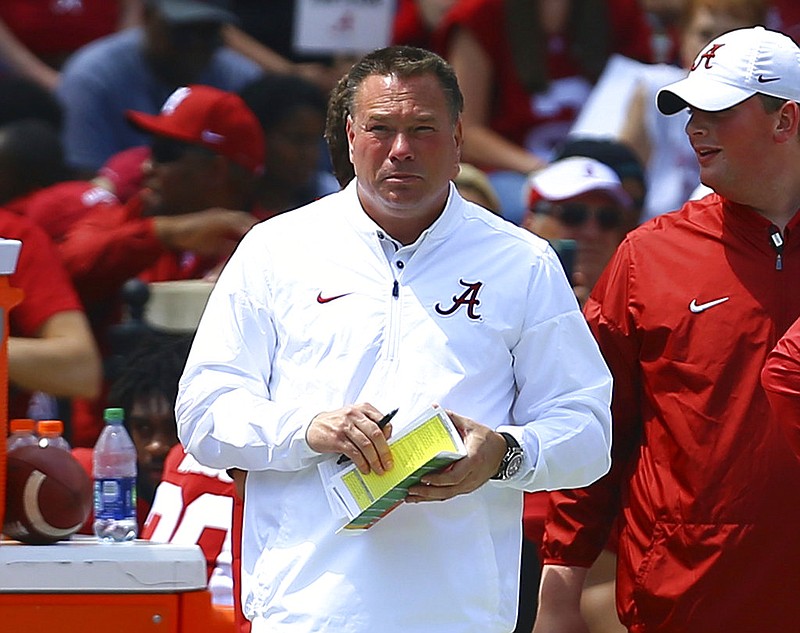 Butch Jones, working as an analyst for Alabama, watches from the sidelines during the first half of the Crimson Tide's spring NCAA college football game in Tuscaloosa, Ala., in this April 21, 2018, file photo. The former Tennessee coach has been hired as the new head football coach at Arkansas State, the university announced Saturday, Dec. 12, 2020.

Former Tennessee and Cincinnati head coach Butch Jones is set to become the 31st coach in school history, the university announced Saturday night. Per Stadium’s Brett McMurphy, Jones arrived in Jonesboro on Saturday evening, where he was introduced in a Red Wolves team meeting just hours after Alabama — where Jones worked as a special assistant to Coach Nick Saban — throttled Arkansas 52-3 in Fayetteville.

In his 11 seasons as a head coach at Central Michigan, Cincinnati and Tennessee, Jones holds a record of 84-54 and has four conference titles on his resume. The 52-year-old coach has spent the past three seasons as an assistant with the Crimson Tide.

"It is truly an honor and privilege to be the head football coach at Arkansas State University," Jones said in a news release. "It is a position that I take great pride in, and I look forward to connecting with our student-athletes to build upon the strong tradition of excellence both on and off the field of play. I am extremely grateful to [Athletics Director] Terry Mohajir, [ASU Chancellor] Dr. [Kelly] Damphousse and [ASU System President] Dr. [Chuck] Welch for trusting me to be the caretaker of Arkansas State football."

Jones replaces Anderson, who resigned Thursday after seven seasons at ASU to take the same job at Utah State, which formally announced his hiring Saturday evening.

Jones will be formally introduced at ASU with a press conference at a later date.