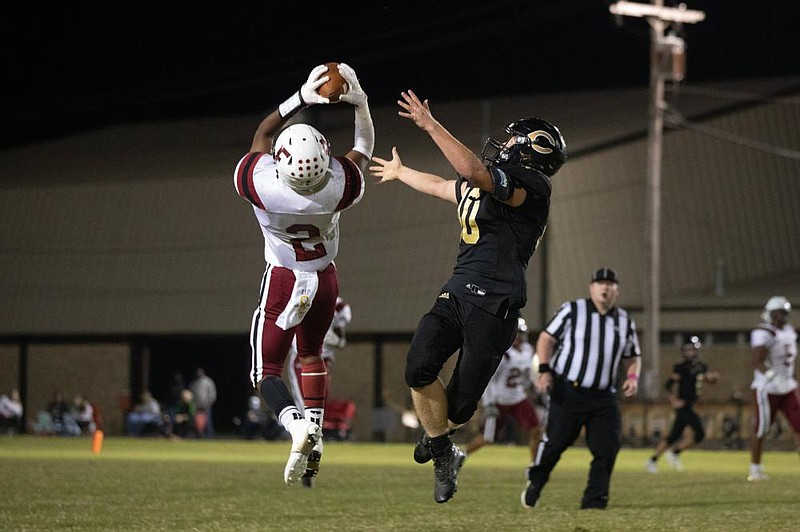 Ja’Quez Cross, shown intercepting a pass in a game against Carlisle in October, has been a force on both sides of the ball this season for Fordyce. (Arkansas Democrat-Gazette/Justin Cunningham)

The first meeting between Fordyce and Des Arc comes in the Class 2A state championship game at War Memorial Stadium in Little Rock.

"It will be big for the both of us," Fordyce Coach Tim Rodgers said. "I've heard of Des Arc and kept up with them. I know the town supports their football team.

"I expect a great ballgame."

The Eagles (13-0) are playing in its first state championship game since 2013, clinching the appearance with a 22-20 victory over Junction City in the semifinals last Friday.

"I'd love to see us play our best game [against Fordyce]."

Des Arc is led by senior quarterback Luke Morton, who has rushed for 858 yards and 26 touchdowns in the Eagles' triple-option offense.

"He's a warrior," Paschal said. "He played and the whole team rallied behind him."

Rodgers praised Des Arc's offense, saying that the Redbugs must play disciplined to try to limit the Eagles.

"They do a great job of running it," Rodgers said. "We haven't played anyone that does it. The quarterback [Morton], he runs hard. He's smart and he takes care of the ball. They do the right things. They're fundamentally sound.

"This is not going to be an easy game."

Senior quarterback Jaheim Brown and senior wide receiver Ja'Quez Cross have been a force for Fordyce.

Brown has passed for 1,895 yards, 26 touchdowns and 9 interceptions. Cross, who has orally committed to Purdue, has accounted for 29 touchdowns this season (20 rushing, 9 receiving).

"They're good. There's no way to make any bones about that," Paschal said. "They're a pretty good ball team. The first thing you notice when you turn on the film is their speed. There's not a position on the field where they're not faster than us at.

Fordyce won its first state championship since 1991 last season when it knocked off Junction City. The Redbugs, Rodgers said, were determined to return to War Memorial Stadium to play for another state championship.

"It started out hard with all of the covid stuff," Rodgers said. "But once we got to play, the kids were ready to play.

"The guys wanted to go back [to the state championship game.] They did what it took to get back."

Des Arc is looking to win its first state title since 1976. Paschal hopes the Eagles can play a cleaner game than their last two games against Bigelow and Junction City as they attempt to dethrone the Redbugs.

"We have to put four quarters together in this game," Paschal said. "The last two weeks, we've done really well in the first half. But we've trailed off toward the end of the game. This game, we have to have four quarters of great ball."

WHAT Class 2A state championship

RANKING No. 1 in Class 2A (at end of regular season)

RANKING No. 3 in Class 2A (at end of regular season)