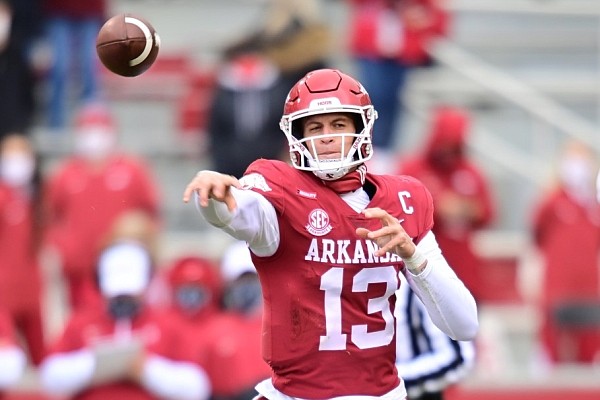 Arkansas' Feleipe Franks throws a pass during a game against Alabama on Saturday, December 12, 2020 at Donald W. Reynolds Razorback stadium in Fayetteville.

After a fairly even first quarter, Alabama proved why it is ranked No. 1 in the country by throttling the University of Arkansas 52-3 at Reynolds Razorback Stadium on Saturday in the regular-season finale.

The Razorbacks were held to negative yardage in the second quarter after entering the period trailing 10-3. Alabama scored four touchdowns in the quarter to take a 38-3 halftime lead. The Tide held a 226-70 edge in yards in the first half.

Arkansas finishes Coach Sam Pittman's first season with a 3-7 record. There is still a possibility the Razorbacks reach a bowl. There is not a minimum number of victories to receive an invite this season because of the coronavirus pandemic, and many bowl projections had the Razorbacks in the postseason entering the Alabama game.

Mike Woods caught a 16-yard play-action slant from Feleipe Franks on the first play from scrimmage. After two no-gains, Christian Barmore sacked Franks for a 6-yard loss. DeVonta Smith’s 22-yard return of Reid Bauer’s 34-yard punt put Alabama at the Hogs’ 47. Slade Bolden caught a 10-yard curl on 3rd and 9 to move the sticks. Jalen Catalon had consecutive tackles vs. Najee Harris and Will Reichard made a 45-yard FG. Trelon Smith went 16 yards with a sprint draw. Treylon Burks caught a 10-yard slant, then Franks made a creative sidearm throw to hit Smith with a 24-yard pickup to the 19. Will Anderson was flagged for holding Burks. After a false start, the Hogs couldn’t move past the 9 and Matthew Phillips booted his first career FG, a 26-yarder. DeVonta Smith’s 10-yard catch converted 3rd and 4. Alabama went for it on 4th and 4 and Mac Jones threw incomplete out of bounds. The Razorbacks had two false starts with KJ Jefferson at quarterback. Bauer punted 42 yards Smith wasn’t touched on an 84-yard punt return TD. Franks was sacked on 2nd and 3rd downs and the Tide took over at the Arkansas 49. Harris had a 17-yard run at left end.

Najee Harris lowered his shoulder for extra yards to gain 5 and convert 3rd and 4, then Mac Jones found Miller Forristall over the middle for 13 yards to the 6. Harris pushed in from the 1-yard line three plays later. Feleipe Franks hesitated in the pocket on an RPO, rolled left and Christopher Allen swatted the ball free. DJ Dale recovered at the Arkansas 5 and Harris ran up the middle to score on the next snap. On 2nd down, KJ Jefferson rolled right and threw incomplete with Treylon Burks being held up in the secondary. Jefferson’s draw netted 9 yards on 3rd and 13.Reid Bauer’s 42-yard punt rolled and was downed at the Tide 30. Jones connected with John Metchie for 22 yards to open the drive. A defensive offsides call helped the Tide matriculate to the 22, where Jones delivered to Metchie down the right sideline for 20 yards. Brian Robinson Jr. scored a 1-yard TD. The Razorbacks went 3 and out with Jefferson. Alabama three consecutive 3rd-down plays to milk clock, the last a 9-yard grab by Forristall. Slade Bolden caught an 18-yard strike and Robinson scored from the 4 with 33 seconds left in the half. Arkansas had a false start then ran out the clock with two Trelon Smith runs.

The Crimson Tide followed up its 13-play TD drive to end the first half with a 14-play march to start the second. Key plays were Miller Forristall’s 9-yard catch, Slade Bolden’s 10-yard catch and John Metchie’s 23-yard catch and run on a slant vs. the blitz on 3rd and 7. On 3rd and 4 from the 9, Mac Jones threw into the end zone on the run and Jalen Catalon picked him off. Catalon’s 43-yard interception return was wiped off due to a targeting call on LB Hayden Henry, who was disqualified. Brian Robinson powered in from the 4 on the next play to cap a series that took more than half of the period. With KJ Jefferson at the controls, the Razorbacks went 3 and out capped by Christian Barmore’s 7-yard sack. With freshman Bryce Young at QB, Alabama went 3 and out. Arkansas notched a first down with a pair of Trelon Smith runs. Jefferson found Mike Woods for an 18-yard catch and run to the Alabama 44. Jefferson suffered a knee injury and lost a fumble on a run up the middle on the next play. Javon Baker caught a 15-yard pass around right end into Arkansas territory. The Crimson Tide reached the Arkansas 25 to end the period.

Alabama’s drive reached the Arkansas 11-yard line. Jonathan Marshall pried the ball free from Roydell Williams and Joe Foucha recovered the fumble at the Hogs’ 11. Feleipe Franks re-entered at QB and Trelon Smith bolted off right tackle, breaking tackles en route to a 12-yard run. Franks scrambled for 7 yards, then Smith moved the chains again. Shane Lee sacked Franks on 3rd and 2 for a 7-yard loss. Ale Kaho roughed Reid Bauer on the punt, giving the Hogs a fresh set of downs at the 50. Trey Knox went 6 yards with a screen. Smith pushed for first-down yardage on 3rd down, but his first lost fumble of the season went straight into the arms of Jaylen Moody. Arkansas CB LaDarrius Bishop waylaid Thaiu Jones-Bell for a 2-yard loss on 3rd and 4 and the Crimson Tide punted. Franks had an 11-yard keeper at left end, then hit passes of 7 yards to Blake Kern and 9 yards to Mike Woods. The Hogs tried a double pass and Treylon Burks’ throw to the end zone was picked off by Brian Branch. Jase McClellan found a hole and sprinted 80 yards for a touchdown. Kern caught an 11-yard pass, Franks was sacked for the eighth time, an 8-yard loss, TJ Hammonds bolted 17 yards and time ran out.