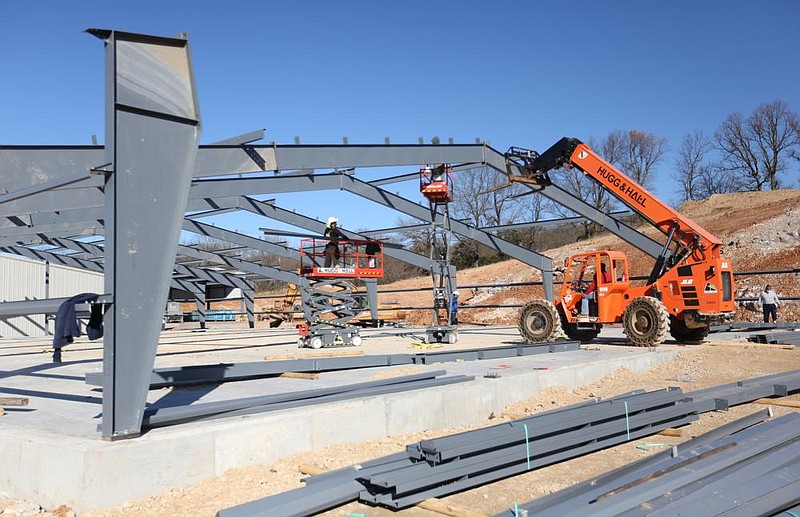 Construction work continues Tuesday on the expansion of Wilson Combat in Berryville. The company is adding 16,000 square feet to bring in more machinery to help build parts for pistols, rifles, shotguns and accessories. Check out nwaonline.com/201213Daily/ and nwadg.com/photos for a photo gallery. (NWA Democrat-Gazette/David Gottschalk)

Berryville-based gun-maker Wilson Combat is expanding, adding 16,000 square feet and expecting to increase its workforce by 20%.

The company, known for its custom 1911 pistols, AR platform rifles, shotguns, a wide variety of firearms parts and accessories, expects the construction project to be completed by January. The new building will house machining equipment to make parts for the company's firearms as well as for after-market sale. It will also serve as additional warehouse space.

The project includes an expansion of the company's parking lot and adds an eighth building to the complex, bringing its total square footage to 93,200 square feet. Wilson Combat employs 200 people.

Guy Joubert, director of manufacturing at Wilson Combat, said demand for firearms and parts has been high across all the products the company offers with Wilson hustling to try to keep pace.

"Demand is overwhelming across the country," Joubert said.

Gun and ammunition sales have skyrocketed nationally on fears spawned by the covid-19 pandemic, civil unrest and the presidential election. Many types of rifles, pistols and shotguns sold out at retail outlets while shooters and sportsmen scooped up ammo, leaving store shelves bare and online retailers with extensive backlogs.

In 2019, federal background checks for firearm purchases totaled 28.36 million, up from 26.18 million in 2018 and breaking 2016's record 27.54 million. While the FBI background-check figures don't represent the number of guns sold, they are generally used as indicators of firearms demand.

Demand in 2020 didn't slow down but accelerated, with each month of the year breaking background-check records. Through December of 2020 there have been 35.75 million checks, more than 26% higher than all of 2019 with one month left to go this year. The National Shooting Sports Foundation, a industry and trade group, said in August that 5 million gun buyers in 2020 were purchasing their first firearms.

In November, Minnesota-based Vista Outdoor Inc., the new owner of the Remington ammunition plant in Lonoke, said it's recalling workers and getting production at the facility geared up to meet nationwide demand. At the time, the company employed more than 400 at the Remington plant, with plans to bring back 300 furloughed workers as soon as possible.

In April 2019, CZUSA, the U.S. arm of a Czech Republic gun manufacturer, selected Little Rock for its North American headquarters and its first U.S.-based production facility. The company said it expects to invest $90 million and employ nearly 600 people within six years. Construction at the plant site at the Port of Little Rock has not started.

Wilson Combat was founded in 1977 by competitive shooter Bill Wilson and has been expanding steadily in recent years.