He got sweet on her after she pulled a tooth gag 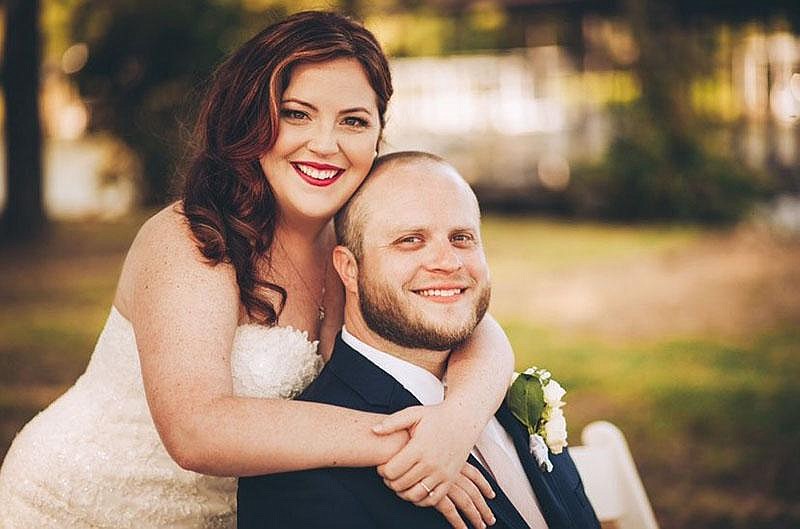 Tori Sutton and Drew Carle exchanged their wedding vows on Oct. 3, 2020, in a small ceremony at Tori’s grandparents’ home in Hot Springs. They had planned a more elaborate event for May but postponed due to the pandemic. “It actually ended up being like the most perfect day,” Tori says. “I’m so glad that it worked out the way it did.” (Special to the Democrat-Gazette)

Tori saw Drew Carle's profile on the dating app Bumble in 2018. He was attractive, she thought, but what really caught her attention was the kid in the picture with him. That kid, Calvin, played for the Thundercats with Tori's nephew, Copeland.

Tori knew Calvin's parents and asked Drew which side of the family he was on. There were more texts, and then Tori called her sister, Heather, who in turn called Drew's sister, Becca.

"They were talking about, you know, like 'Our siblings are talking,'" Tori says.

Calvin and his twin sister, Sloan, had been in daycare with Copeland, long before the inception of the Thundercats, and Becca and Heather had been friends for years.

Drew mentioned in a text on that first day that he had just had oral surgery. Tori assumed he had his wisdom teeth out. 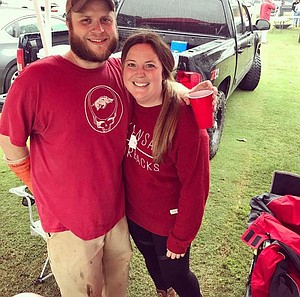 Tori and Drew Carle were brought together by their common acquaintance with a 9-year-old soccer player. Drew knew early on that Tori was his kind of wom- an, because she blacked out her teeth with a Sharpie and sent him a picture to make him laugh. “That’s just kind of the way she is,” Drew says. “She’s my security blanket, but a person.” (Special to the Democrat-Gazette)

"Because at 30 years old what other kind of oral surgery do you have? I said, 'Wisdom teeth are the worst,'" she says. "He said, 'Oh, I don't have a front tooth."

Tori thought he was joking.

He complied, and she saw that he, indeed, was missing a front tooth. She grabbed a couple of friends at work and evaluated her options: She could be put off by it; she could be sympathetic about it, or she could turn to humor.

"I was like, I need to blackout one of my teeth and send a picture back to him," she says.

Her friends were horrified. They insisted that if she sent that picture, this guy would probably never speak to her again. She did it anyway.

"He immediately replied back and was just hysterical laughing. He was like, 'Did you just Sharpie out your teeth?'" Tori says. "And pretty much the rest is history. We talked every day since then."

Drew's missing tooth was the result of an accident with a shovel on his family's farm in Snowball.

"I was kind of down in the dumps about it, really. So just that she could make me laugh about it was great," Drew says.

They planned a date a few weeks after that exchange. But Drew backed out at the last minute, telling Tori he had gotten tied up working on a home renovation project.

When they finally went out a few days later for dinner at a sushi restaurant they were at ease with one another.

She challenged him to show off his best move.

"It was the funniest thing I've ever seen. We still talk about it," she says.

Not long after that, Drew took Tori to visit the farm in Snowball, not far from the Buffalo River. Over the next year and a half or so they went to several sporting events, including the College World Series where they cheered on the Razorbacks, and of course, Thundercats matches. They also enjoyed playing board games.

Tori and Drew celebrated Valentine's Day a little early in 2020, their non-traditional way of avoiding the crowds. After dinner at Doe's Eat Place, they headed home to play Scrabble.

When they walked through the door, there were flowers and candles and the Scrabble board was set up on the coffee table.

They planned a big wedding for May, but they postponed it because of the pandemic. As covid-19 cases continued to surge, they decided to downsize and move forward.

They exchanged their vows on Oct. 3 at Tori's grandparents' place on Lake Hamilton in Hot Springs, with just family and friends in attendance.

"It actually ended up being like the most perfect day," she says. "I'm so glad that it worked out the way it did."

Tori isn't sure if she would have even contacted Drew if she hadn't seen the picture of him with Calvin.

Drew says Tori's controversial decision to send him that photo that made him laugh early on was a big sign she was his type.

"That's just kind of the way she is," Drew says. "She's my security blanket, but a person."

She says: “I had noticed in all of his pictures that he always wore a Fitbit. When we met I was glad he wasn’t super fit.”

He says: “She had pretty eyes and she started instantly making me laugh.”

She says: “I wasn’t nervous. I woke up with all my girls, and we just got ready and drank mimosas and just had the best day. I was just excited to see him.”

He says: “I couldn’t wait to hold her hand again and be next to her forever.”

The best advice I’ve gotten for a long happy marriage:

She says: “Pick your battles. Not everything is worth the fight.”