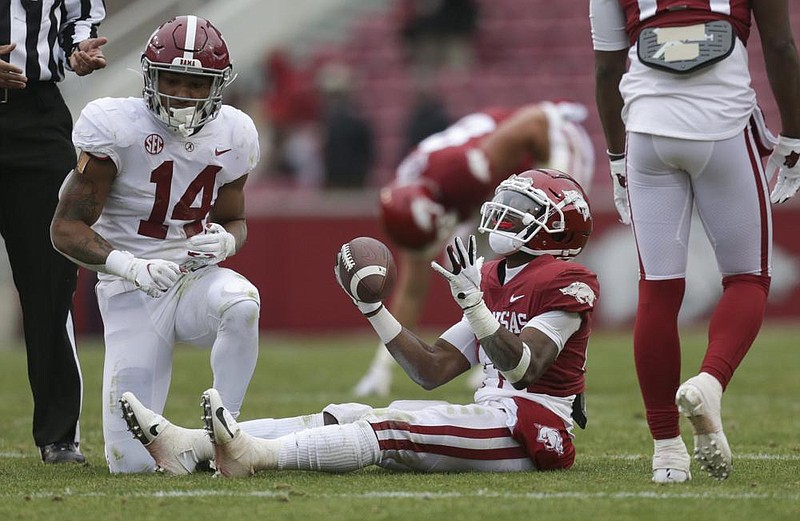 FAYETTEVILLE -- The University of Arkansas held tough for most of one quarter Saturday against mighty No. 1 Alabama.

Then Heisman Trophy candidate DeVonta Smith sprinted up the middle untouched 84 yards on a punt return and the Crimson Tide were merrily on their way to a 52-3 rout of the Razorbacks.

A crowd of 16,500 at Reynolds Razorback Stadium saw Alabama beat the Razorbacks (3-7) for the 14th consecutive time, overlapping with Coach Nick Saban's tenure in Tuscaloosa, Ala.

That is the longest losing streak against one team in Arkansas history.

"We got our butt kicked bad today, but that's the only game that we did," Arkansas Coach Sam Pittman said.

Alabama completed the first unbeaten 10-0 season in SEC play prior to next week's SEC Championship Game against Florida.

"I'm really proud of our guys," Alabama Coach Nick Saban told ESPN. "Nobody's ever done that before, win 10 SEC games in a season and go undefeated, so that was the purpose here today. I thought the guys did a good job of going after it."

Pittman wouldn't share what he and Saban said during a relatively lengthy post-game handshake and chat, but he had big props for the team Saban has assembled.

"It's the best Alabama team I've seen, and he's going to hate me for saying that," Pittman said. "I think he calls that 'rat poison,' but that's how I believe. I believe that's the best squad I've seen."

Alabama stalled with great field position on its first series, then gave up a 66-yard field goal drive on the Razorbacks' second possession for a 3-3 tie.

After that, the Razorbacks managed only 122 more yards of offense -- including minus-2 yards in the second quarter -- and finished with 188 total yards to Alabama's 443.

Feleipe Franks started at quarterback for the Razorbacks and split time with KJ Jefferson, who suffered a knee injury while losing a fumble late in the third quarter and did not return. Franks completed 8 of 10 passes for 90 yards, with his completions matching the number of sacks racked up by the Alabama defense.

"You know early in the game I felt like we had enough time to throw the football," Pittman said. "Evidently we weren't seeing the receivers or they weren't getting open."

"That's a great team over there," said Woods, who had a team-high three catches for 43 yards. "Props to Alabama, Coach Saban. They're the No. 1 team for a reason. Very disciplined, very sound football team."

The Razorbacks lost three fumbles -- by Jefferson, Franks and tailback Trelon Smith -- and lost the turnover battle 4-1, keeping alive Alabama's streak of having exactly one turnover in all 10 games. Arkansas would've had a second takeaway on Jalen Catalon's end zone interception and 43-yard return on Alabama's first sequence of the second half, but the play was wiped out by a targeting call on linebacker Hayden Henry against quarterback Mac Jones.

"It is what it is," Catalon said. "I wish it would have stood, but that's football and you've just got to keep playing."

The Tide did just that with Brian Robinson surging for a 4-yard touchdown on the snap after Henry's ejection to put Alabama ahead 45-3. That was Robinson's third rushing touchdown of the game and the fifth of six for the Crimson Tide.

The drive also ended the day for Jones, Alabama's other Heisman Trophy candidate. The junior completed 24 of 29 passes for 208 yards with no touchdowns or interceptions.

Alabama got off to a sluggish start on both sides of the ball.

After starting at the Arkansas 47 on its first possession after DeVonta Smith's 22-yard punt return, the Tide bogged down at the 28. Will Reichard came on for a 45-yard field goal, making him 11 of 11 on the season.

Arkansas began its most successful sequence after that, keeping the ball for 11 plays and 3:36 of clock time. Trelon Smith opened the sequence with a 16-yard run on a sprint draw, a variation of the play that Missouri had trouble stopping last week. Treylon Burks had a 10-yard catch during the drive.

The big play came on third and 4 from the Alabama 43, when Franks rolled left and let go of a creative sidearm throw to Smith for a 22-yard gain. A holding penalty by linebacker Will Anderson on Burks got Arkansas inside the Alabama 10 for the only time in the game. However, a false start slowed the momentum and Matthew Phillips came on to kick his first career field goal, a 26-yarder for a 3-3 tie with 7:18 left in the first quarter.

The Razorbacks stopped Alabama's next series at the Arkansas 43 by forcing Jones' incomplete pass on a fourth-and-4 play.

The Arkansas fans sensed their team had the momentum at that point, but it was short-lived.

Things began to crumble for Arkansas after that, including a strip-sack by linebacker Christopher Allen as Franks was in scramble mode behind the line. The ensuing fumble was recovered by 307-pound DJ Dale at the Arkansas 5, and Najee Harris plowed in for a touchdown to make it 24-3 on the next play.

Alabama's starting field position in the first half was a big issue. The Tide's average drive start was the Razorbacks' 49, including starts at the Arkansas 47, 49 and 5.

Harris notched two rushing touchdowns and finished with 46 of Alabama's 216 rushing yards. His work was done mostly in the first half.

Robinson had 54 rushing yards and tacked on the last two Alabama touchdowns of the opening half on runs of 1 and 4 yards. The second capped a 70-yard scoring drive that ate up almost all of the final 5:04 of the first half.

Freshman Jase McClellan finished off the rout with an 80-yard touchdown run on the first snap after Burks' double-pass for Trelon Smith from the Alabama 35 was intercepted in the end zone by Brian Branch.

Pittman and the Razorbacks will focus on academics this week prior to Wednesday's national signing day, then get in a couple of practices late in the week in preparation for a postseason bowl bid.