Vaccine distributors get ready to roll out 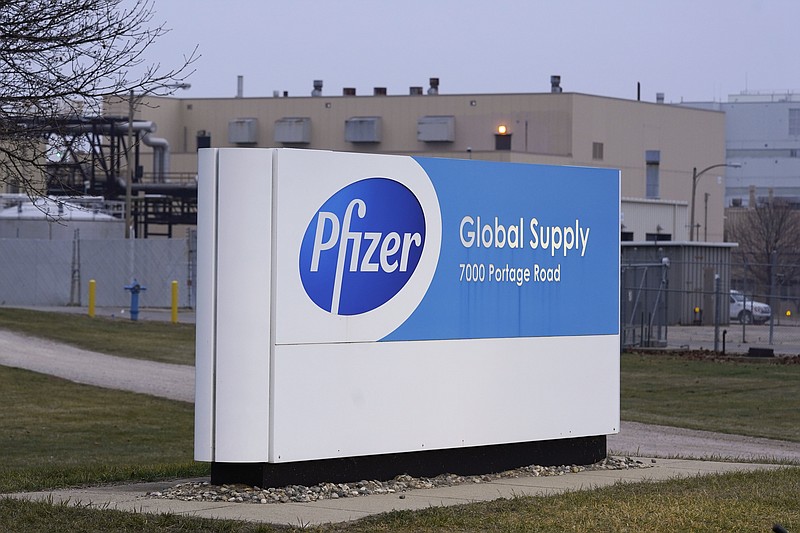 The Pfizer Global Supply Kalamazoo manufacturing plant is shown in Portage, Mich., Friday, Dec. 11, 2020. The U.S. gave the final go-ahead Friday to the nation’s first COVID-19 vaccine, marking what could be the beginning of the end of an outbreak that has killed nearly 300,000 Americans. (AP Photo/Paul Sancya)

WASHINGTON -- The nation's first covid-19 vaccine will begin arriving in states Monday morning, U.S. officials said Saturday, after the government gave the final go-ahead to the shots needed to curb an outbreak that has killed nearly 300,000 Americans.

Trucks will roll out this morning as UPS and FedEx begin delivering Pfizer's vaccine to nearly 150 distribution centers across the states, said Army Gen. Gustave Perna of Operation Warp Speed, the Trump administration's vaccine development program. An additional 425 sites will get shipments Tuesday, and the remaining 66 on Wednesday.

The Centers for Disease Control and Prevention's Advisory Committee on Immunization Practices on Saturday recommended the vaccine for people 16 and older after the Food and Drug Administration late Friday authorized emergency use of the shot.

"It's a hugely important step," said Nancy Messonnier, director of the CDC's National Center for Immunization and Respiratory Diseases.

[Video not showing up above? Click here to watch » https://www.youtube.com/watch?v=iSt8xA7ekWw]

Preparations for this moment have been in progress for months. Military planners have looked at a variety of potential obstacles, such as poor weather conditions or large-scale protests that could disrupt traffic. In an emergency, officials are prepared to use military airplanes and helicopters to deliver vaccines to remote locations.

For all the planning and contingencies, however, there is still a good deal of confusion. States are receiving initial allocations according to a federal formula based strictly on their adult population. But many hospitals say they still don't know exactly how much they will get or when the shipments will arrive.

Initially, about 3 million doses were expected to be shipped nationwide. It was unclear who would receive the first shots, though health care workers and nursing home residents are generally the priority. Perna said health authorities would decide.

A number of shots will be held back for those recipients' second dose, which is needed for full protection.

Pfizer has said it can provide up to 25 million doses to the United States by the end of this month.

Saturday's announcement kicks off a sprawling logistical operation involving the federal and state governments, private companies and health care workers to quickly distribute limited vaccine supplies throughout the U.S. It offers hope in a country grappling with surging covid-19 infections and deaths, which are overwhelming hospitals and raising fears that things will only get worse as people gather over the holidays.

Perna compared the distribution effort to D-Day, the U.S.-led military offensive that turned the tide in World War II.

"D-Day was the beginning of the end, and that's where we are today," Perna said at a news conference. But he added that it would take months of work and "diligence, courage and strength to eventually achieve victory."

Perna tempered his confidence with an acknowledgment of the challenges involved in a mass vaccination campaign, with limited supplies initially available for a country of 330 million people eager to return to normal.

"We know that the road ahead of us will be tough," he said.

UPS and FedEx usually compete fiercely. Now the rivals are working closely together to ship the vaccine developed by Pfizer and BioNTech.

The two shipping companies said they have put the plans they have been working on for months into action.

In a statement Saturday, UPS said it would transport vaccine doses from storage sites in Michigan and Wisconsin to its air cargo hub in Louisville, Ky. From there, they will be distributed to hospitals and other medical facilities across the country using UPS' Next Day Air service, arriving the day after leaving the Pfizer facilities.

"This is the moment of truth we've been waiting for," Wes Wheeler, president of the company's health care division, said in a statement. "The time has arrived to put the plan into action."

Even before the vaccine was approved, UPS had started shipping out kits with the medical supplies needed to administer it, such as alcohol wipes and syringes, Wheeler told a Senate subcommittee. UPS and FedEx will split distribution of the vaccine throughout the country, he said. After those shipments arrive, all Pfizer dosing sites will receive another shipment from UPS of 40 pounds of extra dry ice to keep the vaccine at a frigid temperature.

"You have two fierce rivals here, and competitors, in FedEx and UPS, who literally are teaming up to get this delivered," Richard Smith, a FedEx executive, told the Senate's Subcommittee on Transportation and Safety.

Both companies said the shipments will be closely tracked and monitored and will be given priority over other packages. Pfizer designed specialized containers packed with enough dry ice to keep a minimum of 975 doses cool for up to 10 days.

Shippers have spent months upgrading cold-storage infrastructure for the vaccine, which must be stored at minus 94 degrees. And Pfizer's GPS-enabled sensors will let it track each shipment and ensure it stays cold.

MaineHealth, a network of 12 hospitals based in Portland, plans to provide an expected first delivery of nearly 2,000 vaccine doses to doctors, nurses and others facing risk as they treat covid-19 patients, said Dr. Dora Mills, chief health improvement officer.

"It's almost hard for me to talk about without tearing up," Mills said Saturday. "This vaccine gives us some glimmer of light at the end of the tunnel."

At Novant Health in Winston-Salem, N.C., the new ultracold freezers are ready -- and can eventually house more than 500,000 doses of the vaccine.

In Los Angeles, Cedars-Sinai Medical Center has installed extra security cameras to protect the secret location of its soon-to-arrive supply.

In Jackson, Miss., the state's top two health officials are preparing to roll up their own sleeves in the coming days and be the first to get the shots there as cameras roll, hoping to send the message that they trust the vaccine.

Other hospital systems are reeling from the news that their initial allocations will be much smaller than they had hoped. The Cleveland Clinic, one of the 10 hospital groups in Ohio that are receiving the first batch, is expecting only 975 doses in an initial shipment, even though it has more than 40,000 employees around the state.

Ohio has prioritized getting initial doses to people in nursing homes and assisted-living centers.

"We're going to have a lot less vaccine than we have people wanting it," said Dr. Robert Wyllie, the Cleveland Clinic's chief of medical operations, adding that the system would first vaccinate workers in the intensive care units at four hospitals that are experiencing the highest volumes of covid-19 patients.

Everybody who works in those units, including housekeepers, will be eligible for a shot. Like many health systems, the Cleveland Clinic plans to stagger vaccinations so that if side effects cause some employees to miss work, then the unit can still be fully staffed.

The first shipments will leave Pfizer's manufacturing plant in Kalamazoo, Mich., by truck and then be flown to regional hubs around the country. Medical distributor McKesson and pharmacy chains, including CVS and Rite-Aid, also are involved in the initial rollout and vaccinations at nursing homes and assisted-living centers.

Distribution sites are mainly large hospitals and other facilities able to meet the storage requirements. Within three weeks, vaccines should be delivered to all vaccination sites identified by the states, such as local pharmacies, Perna said.

The vaccine was timed to arrive Monday so health workers could receive the shots and begin giving them, Perna said.

Workers at Mount Sinai Hospital System in New York did a dry run last week. In a clean room, pharmacists practiced making separate doses of a training vaccine and ensuring the freezer was kept at temperatures colder than in Antarctica.

"Not a lot of people have vaccinated for a large pandemic like this," said Susan Mashni, vice president of pharmacy at Mount Sinai. "So we want to make certain that we get it right. There's a lot of different moving pieces and parts."

Some said local health officials were struggling to ensure the vaccine is distributed fairly and to those most in need and to ease people's concerns about getting the shot.

But "the funding necessary for state and local health departments to carry out this program has been put in the deep freeze," said Dr. Jeffrey Duchin, a Seattle physician representing the National Association of County and City Health Officials.

The FDA's authorization capped an unprecedented global race to speed vaccines through testing and review, chopping years off the normal development process.

It found the vaccine highly protective with no major safety issues. U.S. regulators worked for months to emphasize the rigor and independence of their review, but President Donald Trump's administration pressured the agency until the final announcement.

Concerns that a shot was rushed could undermine vaccination efforts in a country with skepticism about vaccines.

One of the biggest outstanding questions is how many Americans -- even in the health care field -- will hesitate; a Pew Research Center poll conducted late last month found that 18% said that they would "definitely not" take the vaccine "if it were available today" and that 21% said they would "probably not."

"Science and data guided the FDA's decision," agency Commissioner Stephen Hahn said Saturday. "We worked quickly because of the urgency of this pandemic, not because of any other external pressure." The FDA's vaccine director, Dr. Peter Marks, said the agency will carefully track any reports of allergic reactions in the U.S.

On Thursday, Temple Health in Philadelphia emailed 3,000 invitations to employees deemed at "high risk" of infection. Within minutes, janitorial staff members and anesthesiologists began signing up. And within 24 hours, each of the 252 slots at the main campus's vaccination site were taken.

High demand assuaged Chief Medical Officer Tony Reed's fears that vaccine hesitancy would keep people away, wasting precious vaccine. Among the first takers, who will likely start receiving shots Wednesday, will be people working on covid-19 floors and in the emergency room. The goal is simple, Reed said: "To do the most good for the most people."

At Spartanburg Regional Healthcare System in South Carolina, Dr. Chris Lombardozzi, the system's chief medical officer, said he did not anticipate much resistance from employees.

"Our medical staff is completely on board," he said, noting that he'd had discussions with leaders of several departments. To a person, he said, they say, "I want to be first."

Their willingness reflects the reality of how hard the pandemic has hit their professions.

"We are so tired of this," Lombardozzi said. "We are tired of watching people die. We are tired of not having a cure for an awful, awful virus. We want this to go away." 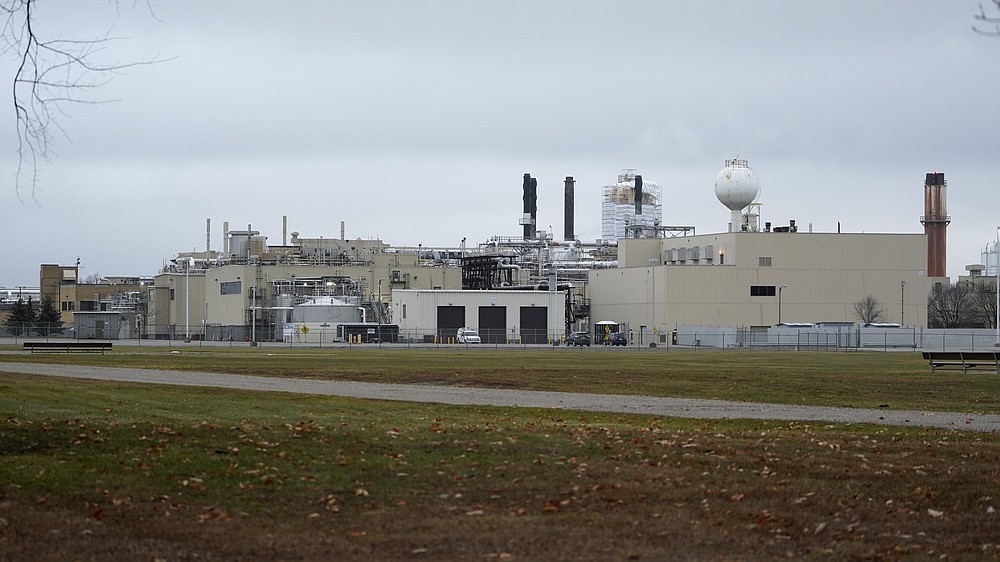 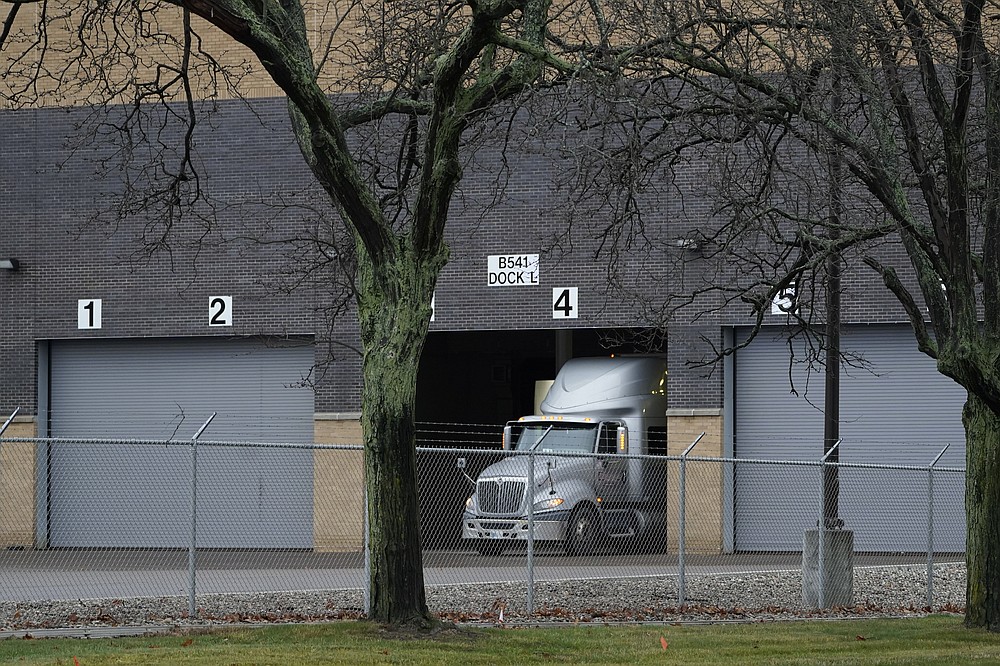 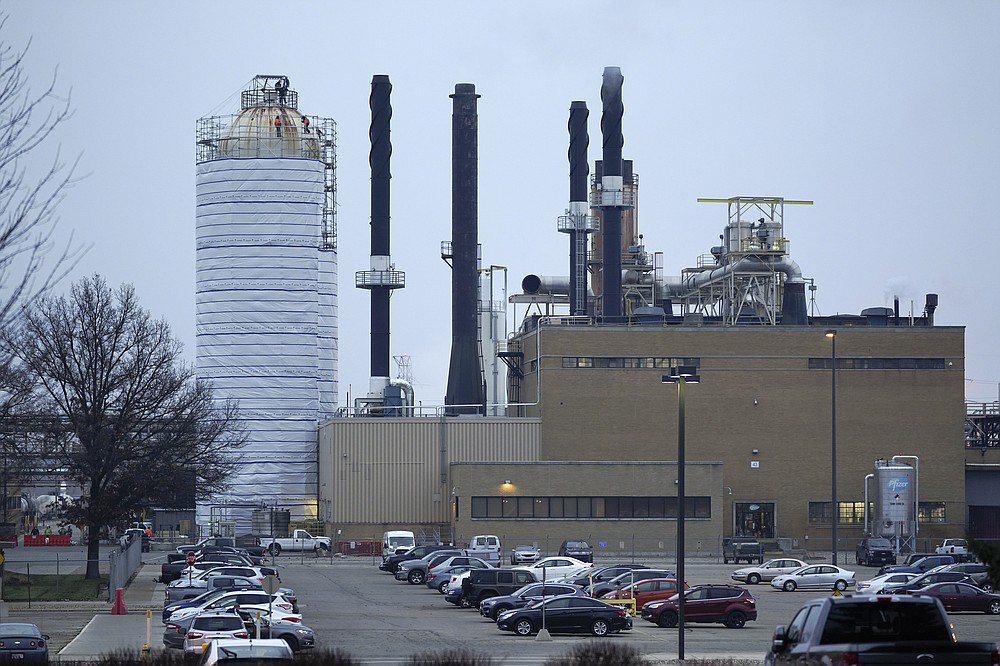 The Pfizer Global Supply Kalamazoo manufacturing plant is shown in Portage, Mich., Friday, Dec. 11, 2020. The U.S. gave the final go-ahead Friday to the nation’s first COVID-19 vaccine, marking what could be the beginning of the end of an outbreak that has killed nearly 300,000 Americans. (AP Photo/Paul Sancya) 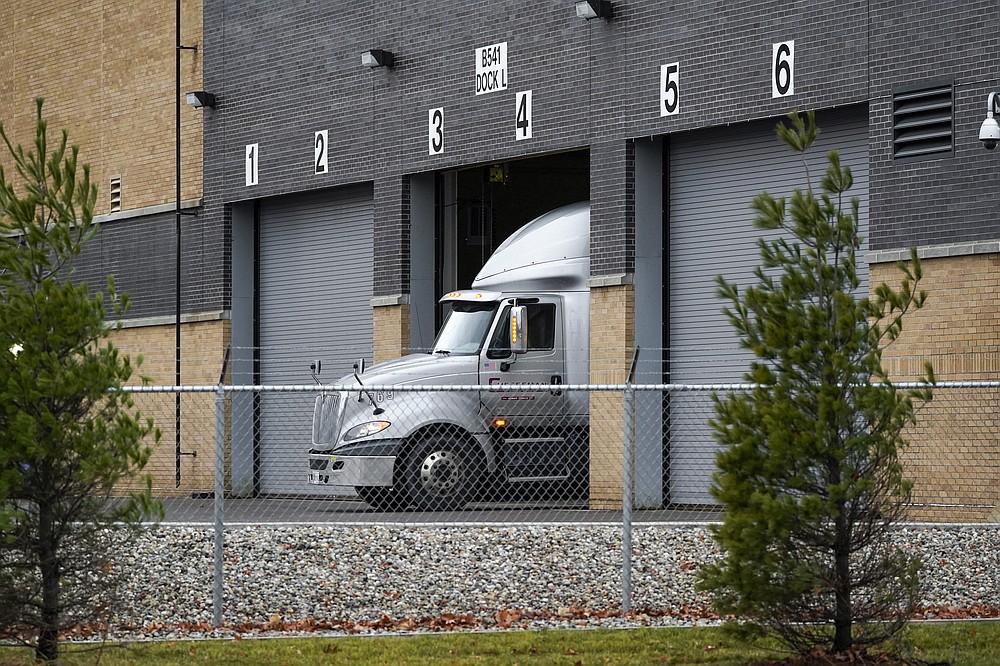 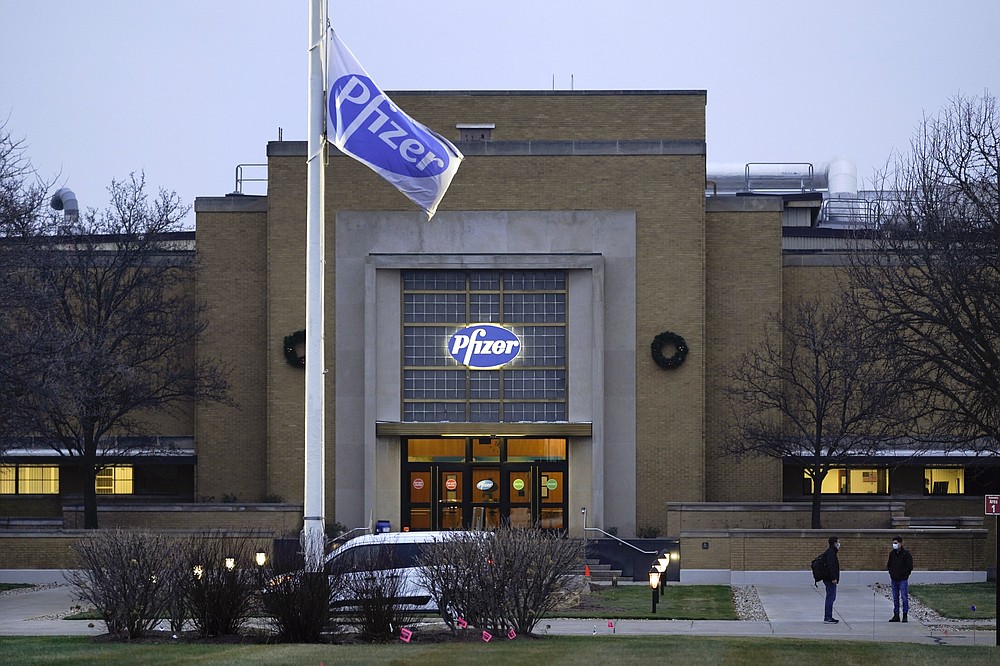 The Pfizer Global Supply Kalamazoo manufacturing plant is shown in Portage, Mich., Friday, Dec. 11, 2020. The U.S. gave the final go-ahead Friday to the nation’s first COVID-19 vaccine, marking what could be the beginning of the end of an outbreak that has killed nearly 300,000 Americans. (AP Photo/Paul Sancya)
ADVERTISEMENT