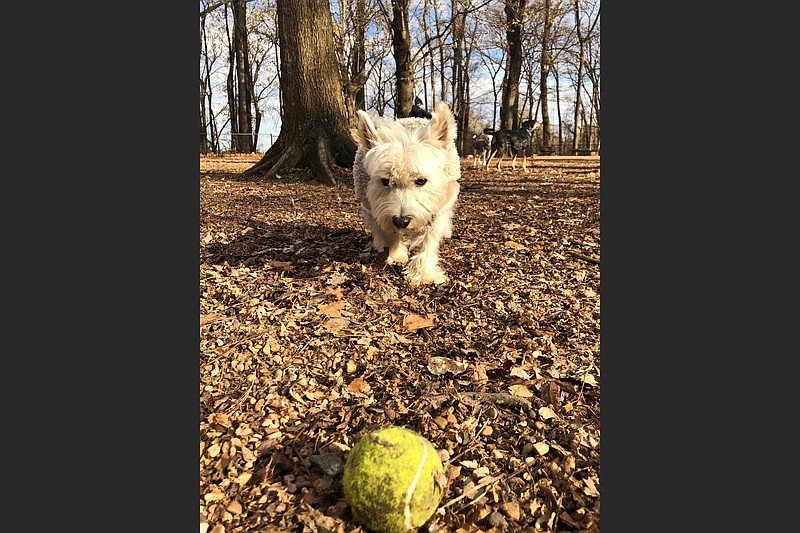 Indy, a West Highland white terrier, checks out one of many discarded tennis balls lying about the Paws Park at Murray on Dec. 6. (Arkansas Democrat-Gazette/Celia Storey)

In November, the Companion Animal Parasite Council released a list of 10 cities exhibiting the highest percentage increase of roundworms in the nation. The monthly report identifies U.S. metro areas experiencing the highest percentage increase in positive roundworm tests in the last 30 days. Little Rock was No. 5 on the list behind, in descending order, Killeen, Texas; Wichita, Kan.; Mobile, Ala,; and the nation's wormiest city, Charleston, W.Va.

Current information on parasitic activity is viewable at the council's websites CAPCVET.org and PetsAndParasites.org.

"Last year, we were looking at the prevalence of heartworms. This year, the first half of the year we were looking at hookworms and then we decided to look at roundworms because we're seeing the prevalence of hookworms and roundworms increasing in the U.S.," said Dr. Craig Prior, a council board member and a veterinarian in Tennessee. "It's increased about 5% over the last five years.

"We just thought it was important to try to increase awareness."

According to the organization, roundworms (Toxocara canis) are the most common intestinal parasite in pets.

Dogs and cats can become infected through ingestion of roundworm eggs in the environment or from eating infected hosts such as rodents or birds.

Lactating female animals can also pass roundworm larvae to nursing puppies or kittens. Puppies can also be infected in utero as the worms penetrate the placenta, but this doesn't happen in cats.

However, the most common method of transmission is as icky as the parasites themselves. Infected animals pass roundworm eggs through their fecal matter, which can infect any dog or cat that comes in contact with it, either directly or on contaminated ground. This makes many dog parks — as well as beaches, playgrounds and sandboxes — potential petri dishes for the spread of the unwelcome guests.

"Roundworm females lay eggs, and they can literally lay hundreds of thousands of eggs in an environment. I mean they are very, very prolific," Prior said. "The eggs come out in the stools and, unfortunately, these eggs are incredibly hardy and can live for literally years in the environment.

"Think about when you go to the dog park, you know how many dirty, nasty tennis balls you see in the dog park? A tennis ball is a perfect vehicle for spreading roundworms because it rolls around in the dirt and the muck and picks up stuff that adheres to it. A dog picks it up in his mouth and it gets the soil and eggs that way."

The effects of roundworms are potentially most serious for baby animals, causing severe anemia and in some cases death in puppies and kittens. Adult animals can die from severe roundworm infection, Prior said, but such cases are not common.

And, in an important side note that seems oddly fitting for a year like 2020, yes, these parasites can be transmitted to humans. Once ingested they migrate to the human liver, lungs, muscles and brain.

A section of the federal Centers for Disease Control and Prevention website explains that ingested roundworm eggs can hatch inside the human body and travel about via the circulatory system. But many infected humans don't get sick, the CDC says; studies have found about 5% of the U.S. population is infected, and infection is more prevalent in warm regions. Here is a shortcut link to the website: arkansasonline.com/1214cdc.

"Anyone can get it, but it's mainly children," Prior said.

"Humans also get what are called ocular larval migrans where the larval stage migrates through the retina of the eye. They can now distinguish what it is, but they used to think it was a tumor and they used to remove kids' eyes. It was horrible. It's pretty nasty."

To see photos of these worms and graphics describing their lifecycle, go to arkansasonline.com/1214worm.

Roundworm infections in pets are on the rise nationally, the council says, for several reasons. One involves the seasons, as the prevalence of roundworm infection is higher in fall and winter months.

Another cruelly ironic contributing factor is higher pet adoption rates in 2020. "Everyone is wanting dogs right now because of the pandemic. Everyone wants a buddy at home with them," Prior said. "So, what we find is this massive movement of rescue animals to meet that need, but these rescue animals often are not being tested or treated before they are adopted out. That sometimes contributes to what we're seeing."

But by far the biggest contributors to the problem are pet owners who are lax in cleaning up after their dog.

According to the U.S. Environmental Protection Agency, 40% of dog owners let the chips fall where they may, a growing trend that's wreaking havoc in public areas and especially dog parks.

The council cites studies showing more than 1 in 4 fecal samples collected in dog parks nationwide contained gastrointestinal parasites. "There was a study done worldwide years ago," Prior said. "When they looked at the U.S., they're looking at parasitic contamination of soil, and they didn't look at dog parks. They looked at just beaches, common areas, bikeways, greenways, general parks, and they found that 14.9% of all soil samples taken were contaminated by parasitic elements.

"There was a dog park study done last year and what they found was 1 in 5 dogs were positive for parasites and 80% of all the dog parks were contaminated with parasitic elements.

"So, your dog parks are ideal places, if you want your dogs to come down with parasites.

"The problem with dog parks is that if you take your dog to a boarding facility, veterinary facility, daycare facility, they have to be up-to date-on immunizations. They have to be free of internal and external parasites. Dog parks have no expectation of anything. Anyone can take any dog to the dog park. That's one of the big areas where we're seeing this problem and where we're getting more parasites showing up." 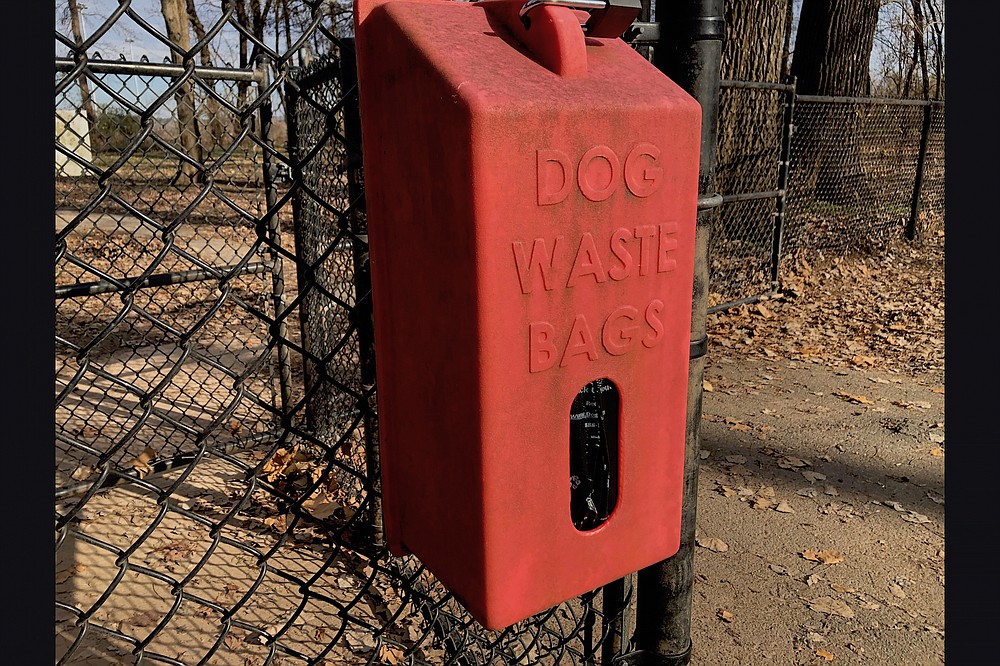 "In the dog parks per se, I don't think the people know to pick up the dog poop. I think they're pretty well leaving it," he said. "The dog parks are fenced-in areas, they've got a large and small dog park in two different areas. As far as I've seen, they don't do a whole lot of picking up in there. It's kind of the attitude, 'That's what they're there for.'"

Moix said in his decade with the department, he's not known Parks and Recreation to send a cleanup crew to rake or clean the dog parks either, although much effort and money are spent to provide clean-up bags for dog owners' use.

On a recent Sunday, park patrons who have used the Paws Park at Murray for years said it's almost always pleasantly clean, although discarded tennis balls abound. They see one park user regularly collecting balls, filling in holes and tidying up.

Moix estimated the department annually goes through 30 cases of pick-up bags just for the dog parks, each case containing six boxes of 500 bags each. Additional "mutt mitts" are ordered for selected general-purpose parks to encourage residents to clean up after their pet. 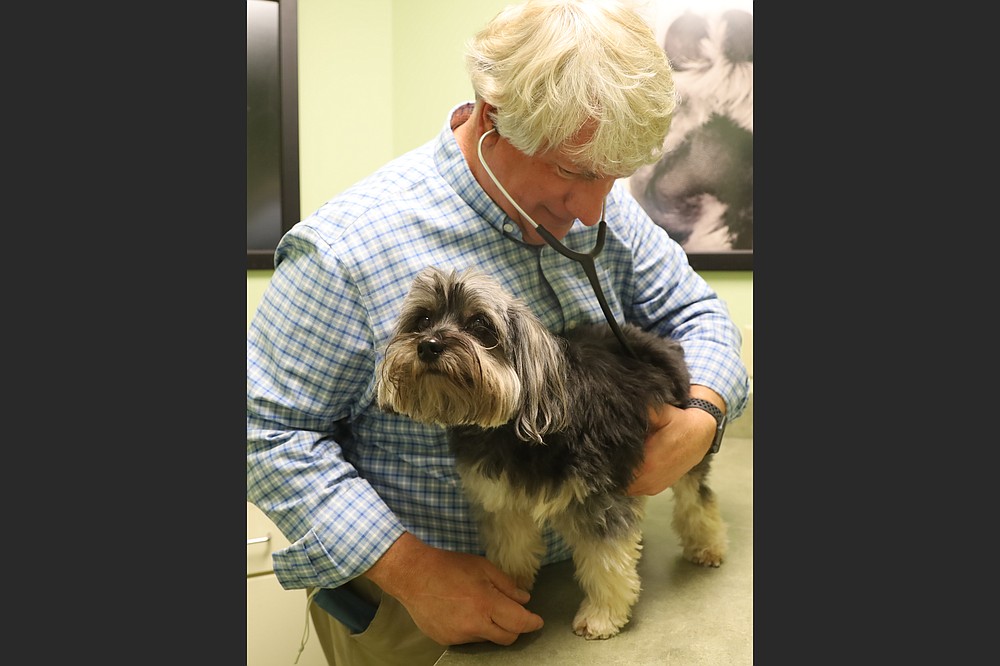 Tim Paladino, VMD, doesn't see many roundworm-infested animals at Allpets Animal Hospital in Little Rock because his patrons give their pets parasite-preventing treatments. (Special to the Democrat-Gazette/Dwain Hebda)

Given these environmental challenges, it is important to follow good preventative care. Prior said puppies and kittens should be tested for intestinal parasites four times in the first year of life, and all dogs and cats should be tested at least twice a year thereafter.

Another part of the process involves keeping your pet on a regular schedule of medications. Dr. Tim Paladino of Allpets Animal Hospital in Little Rock said he sees very little in the way of roundworms because of his customers' adherence to their pets' ongoing maintenance treatments.

"I would say those people who are extremely compliant with parasite control for other things, by default oftentimes get the roundworm thing taken care of too."

Paladino said keeping your dog on a regular treatment isn't particularly expensive either, with some options coming in at less than $10 per month. Common treatment brands he recommends are Interceptor, Heart Guard and Revolution.

"Roundworms are everywhere. They've been everywhere forever," he said. "There's really nothing new about their life cycle or their ability to develop resistance against de-wormers ... anything can develop resistance against de-wormers. There's really been nothing new about these little ascaris except they are just becoming harder and harder to kill.

"I'm not saying we don't see roundworms here. We certainly do. But I have a practice where people do a great job, an excellent job actually, of giving their dogs heartworm preventatives and all those kinds of things, so I'm not seeing any major issues here."