Hindsight is 2020: Pop culture and covid-19 collided, and we couldn’t look away 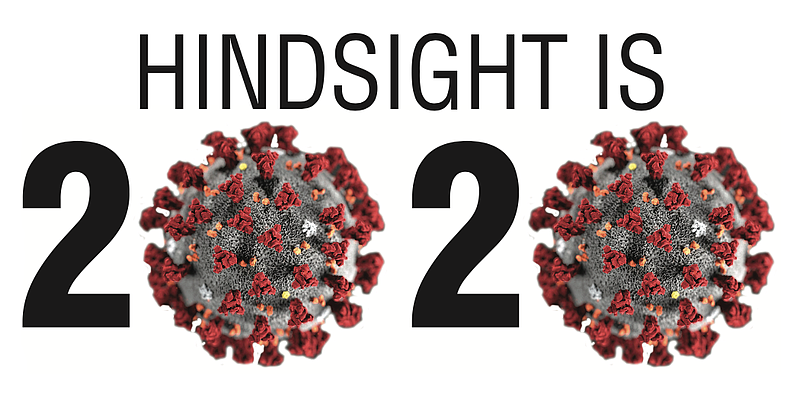 And now, for our annual look at the year in pop culture ... Oh, wait. This was 2020. The year everything stopped cold.

Well, not really. Truth is, people turned to culture of all kinds in 2020 — highbrow and lowbrow — to satisfy varied and sometimes conflicting needs: Distraction, inspiration, consolation, escapism, hope. And those needs evolved: If we began lockdown in March by addictively binge-watching the darkly bizarre "Tiger King," by early winter we were transfixed by a different sort of animal: the graceful octopod of "My Octopus Teacher," extending her tentacles to make connections that seemed achingly poignant in a time when mere hugs between humans are taboo.

And while live entertainment was tragically curtailed due to the raging pandemic, performers often found their own stages, in endlessly creative ways. A Broadway star serenaded health workers from his apartment window, and ballet dancers performed "Swan Lake" from their bathtubs. There were Zoom proms, drive-in concerts and a host of cast reunions.

And then there was the TikTok guy on the skateboard. Drinking Ocean Spray from the bottle. Singing Fleetwood Mac. For all of us.

A totally selective, appropriately scatterbrained journey through some cultural moments of 2020: 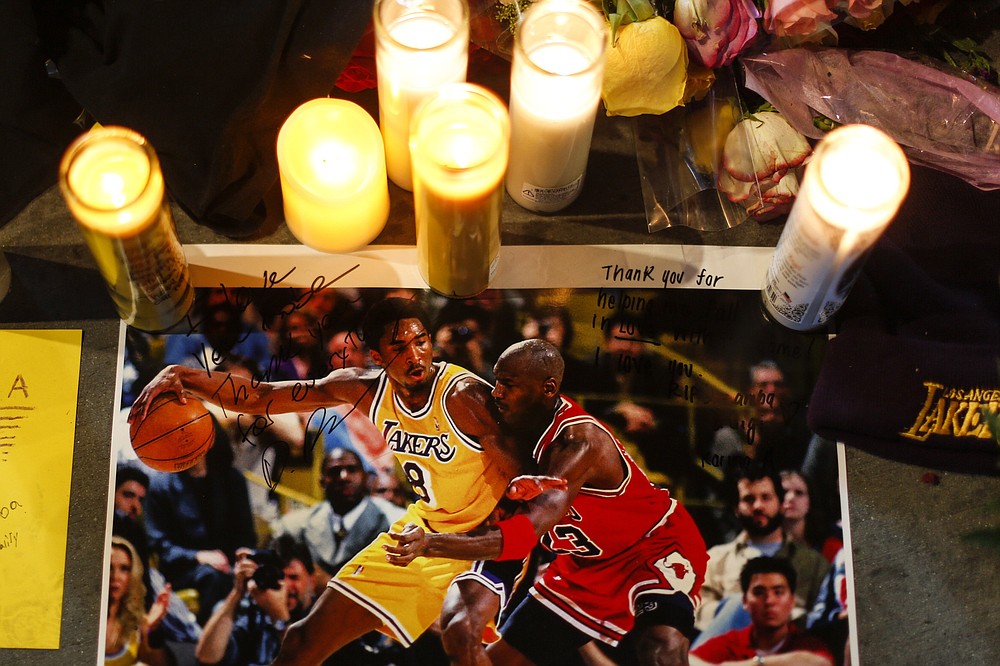 A picture of Kobe Bryant and Michael Jordan is shown at a memorial for Bryant in front of Staples Center on Jan. 28 in Los Angeles. Bryant, the 18-time NBA All-Star who won five championships and became one of the greatest basketball players of his generation during a 20-year career with the Los Angeles Lakers, died in a helicopter crash on Jan. 26. (Ringo H.W. Chiu/AP file)

The year starts like any other ... as if! At the Golden Globes, Ricky Gervais hosts for the fifth time and seems eager to get home. Michelle Williams speaks passionately of a woman's right to choose, Patricia Arquette about voting, and Joaquin Phoenix about ... something. The world mourns the sudden loss of Kobe Bryant and ponders a royal first when Harry and Meghan step back from their duties. What will it all mean? 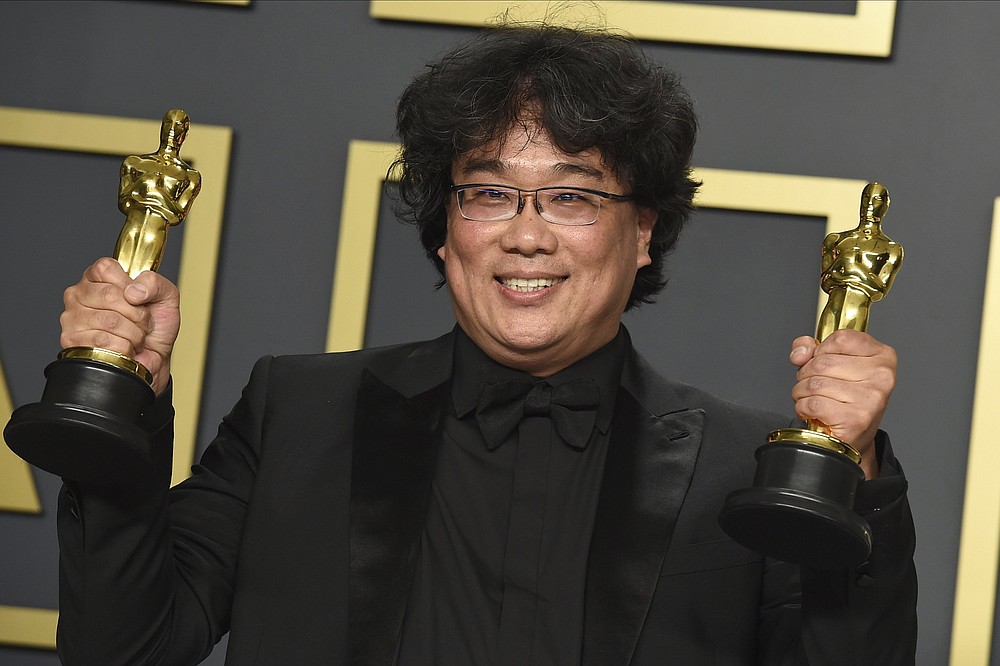 Bong Joon Ho poses in South Korea with the awards for best director for “Parasite” and for best international feature film for “Parasite” at the Oscars in Los Angeles on Feb. 9. Bong Joon Ho won four awards, including one for best original screenplay and best picture. (Jordan Strauss/Invision/AP file)

And the Oscar goes to ... was that this year? Yep, it was only months ago that "Parasite" swept the Academy Awards, a historic moment for South Korea and director Bong Joon Ho, clearly adored in Hollywood. (If not by President Donald Trump, who asks supporters at a rally: "What the hell was that all about?") 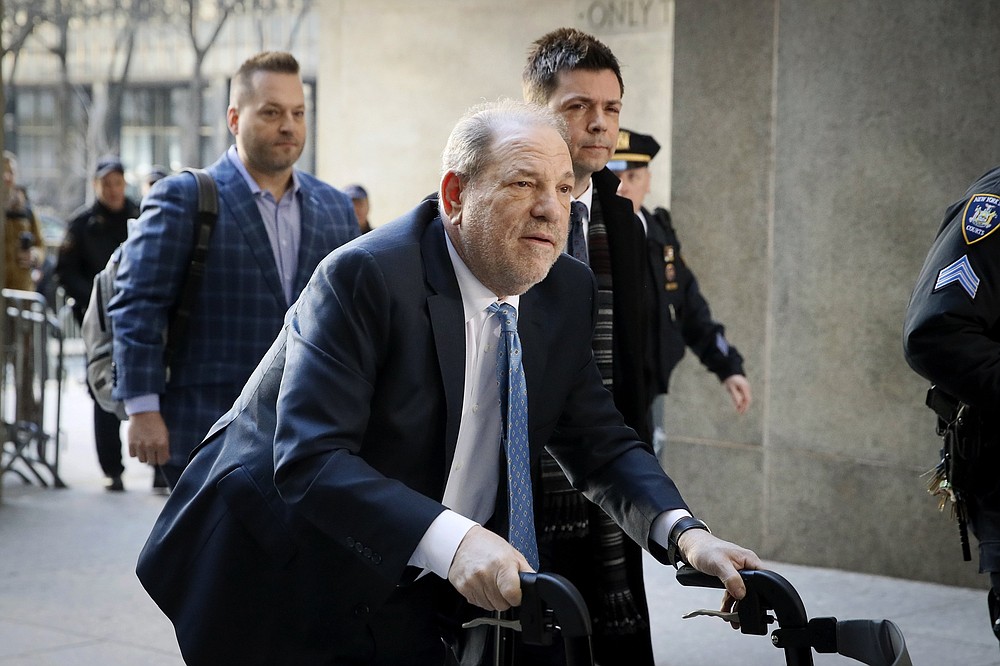 Harvey Weinstein arrives at a Manhattan courthouse as jury deliberations continue in his rape trial in New York on Feb. 24. Weinstein was transferred to a state prison in New York on March 18, to begin a 23-year sentence for rape and sexual assault in his landmark #MeToo case. (John Minchillo/AP file)

In a landmark moment for the #MeToo movement, Harvey Weinstein is sentenced to 23 years in prison for sex crimes, the once-powerful mogul led away in handcuffs for what could be the rest of his life. Days later, the coronavirus shuts down much of life as we know it. Binge-watching reaches new heights. "Tiger King" on Netflix, a story of very big cats and very strange people, becomes the thing everyone can't look away from.

Who's that singing from the fifth-floor window? Every night at 7 p.m. as front-line workers are honored with cheers and honking horns, a beautiful tenor is heard in upper Manhattan singing "The Impossible Dream": It's Tony-winner Brian Stokes Mitchell, just recovered from covid-19 himself, doing his signature song. Another artist making use of pandemic free time: Misty Copeland, American Ballet Theatre's first Black female principal dancer, brings together 32 ballerinas from 14 countries, all dancing the famous "Dying Swan" in a video for "Swans for Relief," a fundraiser for struggling dancers. 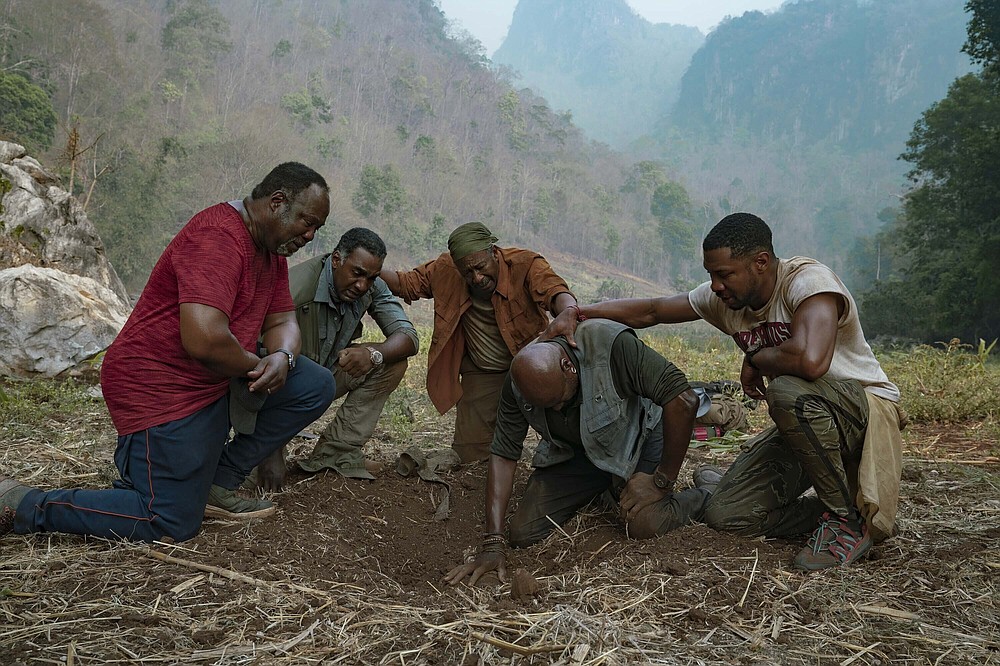 Isiah Whitlock Jr. (from left), Norm Lewis, Clarke Peters, Delroy Lindo and Jonathan Majors perform in a scene from the Spike Lee film “Da 5 Bloods.” In a year when Black Lives Matter forced a rethinking of so many things, the film looks at the Vietnam War from the oft-ignored perspective of its Black soldiers. (David Lee/Netflix via AP)

A new Spike Lee joint arrives at the perfect time: In a year when Black Lives Matter is forcing a rethinking of so many things, "Da 5 Bloods" looks at the Vietnam War from the oft-ignored perspective of its Black soldiers. And in what might be the future — or near-future — of concert-going, Garth Brooks presents a one-night-only show at 300 drive-in theaters, for $100 a car. (Unlike the live, secret show Keith Urban did in May for health-care workers, though, Brooks' concert is recorded.)

Independence Day barbecues may be canceled, but musical (and history) fans have reason to cheer: the live-captured film version of Broadway smash "Hamilton" is fast-tracked by more than a year to stream on Disney+. The roar of a real Broadway crowd, from performances filmed in 2016, is enough to bring a tear to a theatergoer's eye. On a much smaller scale, ballet lovers are treated to a wildly inventive YouTube video featuring dancers across the globe performing "Swan Lake" in their bathtubs (Get it? Lakes?) 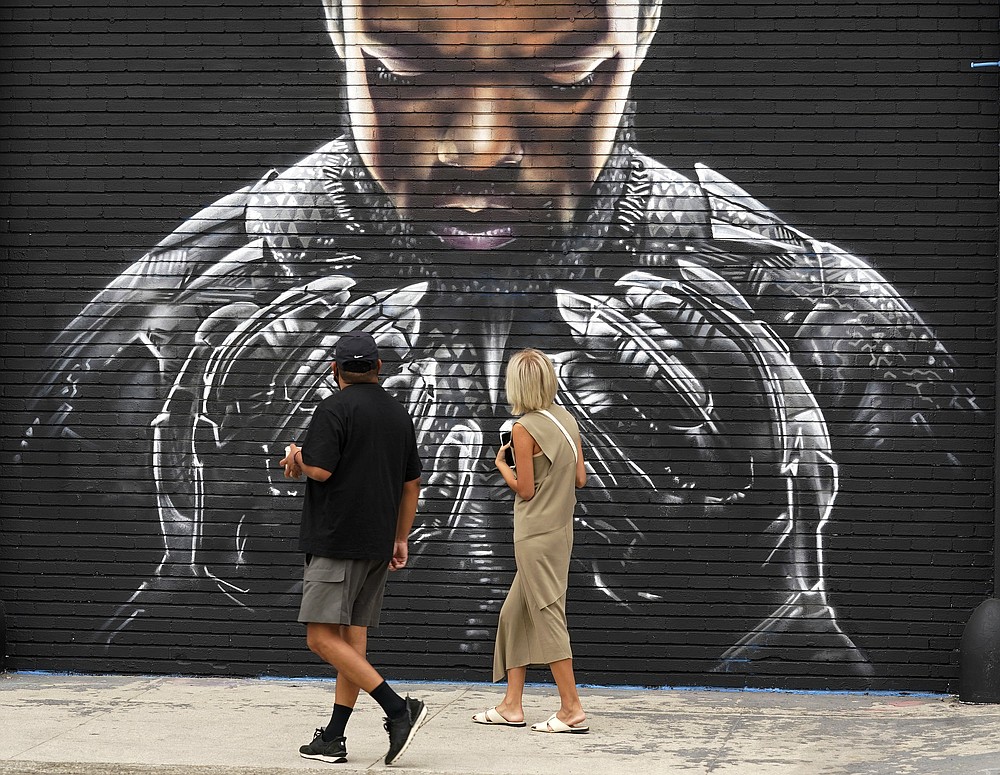 Pedestrians look up at a mural by artist Shane Grammer of late actor Chadwick Boseman’s character T’Challa from the 2018 film “Black Panther,” on Sept. 8 in Los Angeles. Boseman died of colon cancer Aug. 28 at age 43. The world mourned the actor who, like many of his characters, radiated a regal sense of dignity. (AP Photo/Chris Pizzello, File)

Fans are gutted by the death of Chadwick Boseman, who achieved fame with a series of star-making performances as Jackie Robinson, James Brown and Thurgood Marshall, and as groundbreaking superhero "Black Panther." Boseman dies at 43 of colon cancer, an illness he kept secret from almost everyone, making movies in between surgeries and treatments. The world mourns an actor of immense talent who, like many of his characters, radiated a regal sense of dignity. 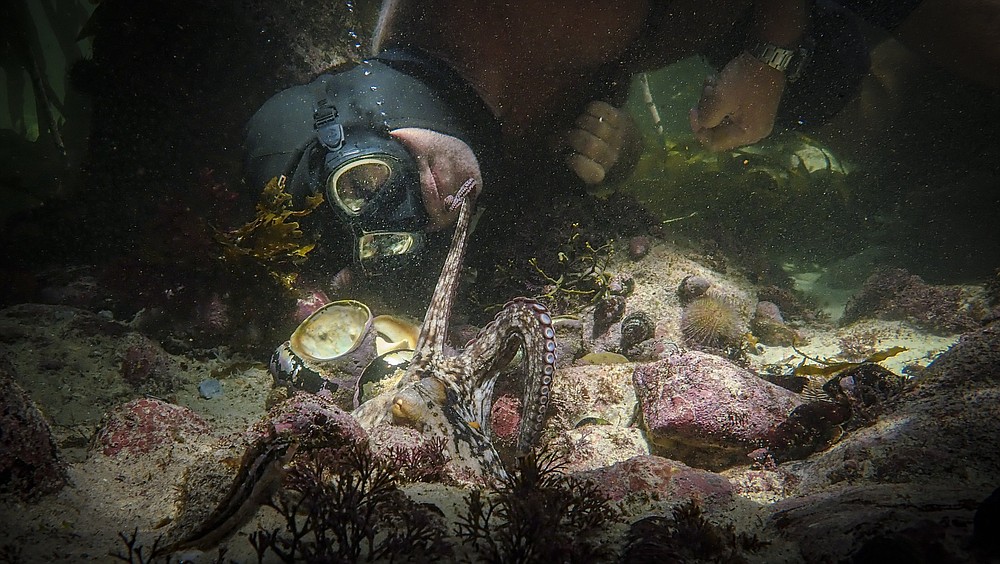 Craig Foster interacts with an octopus in a scene from the documentary “My Octopus Teacher.” The graceful octopod extended her tentacles to make connections that seemed achingly poignant in a time when mere hugs between humans are taboo. (Netflix via AP)

What do fashion shows look like in the pandemic era? Mostly they're virtual, but Christian Siriano invites guests to his Connecticut home for a socially distanced runway show with models in masks. The Emmys are virtual, too, but the awkward format can't quash the ebullient celebration up in Canada for the zanily talented cast of "Schitt's Creek." Oh, and Brad and Jen are back together! Just kidding! But they appear together in a Zoom reading of "Fast Times at Ridgemont High." On the other side of the world (and underwater) in South Africa, we meet a glorious creature who simultaneously captures our need for escape and for emotional connection: "My Octopus Teacher" is an antidote for troubled times. 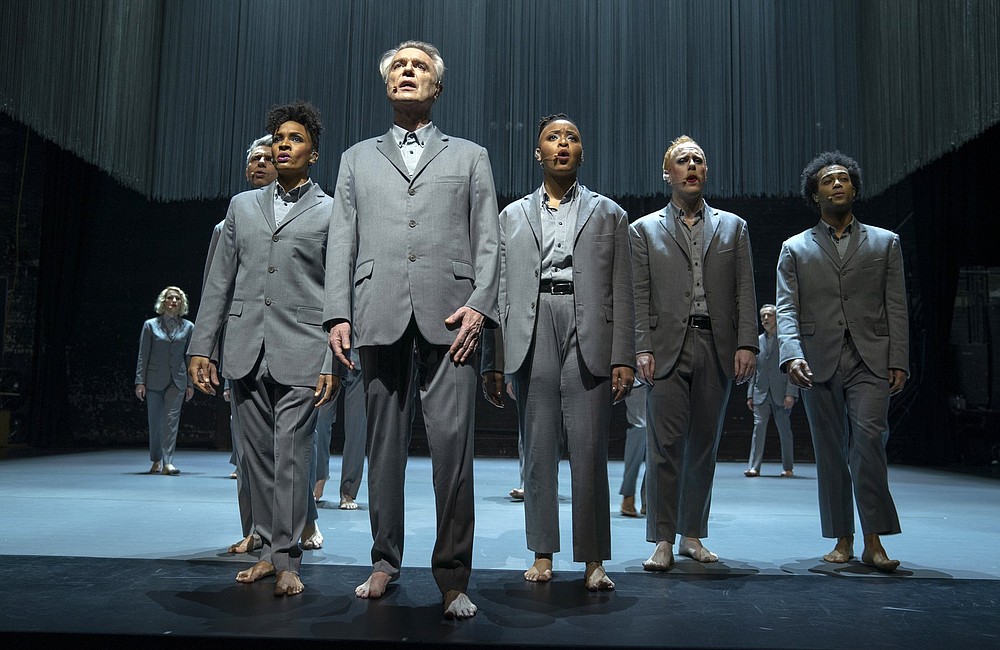 David Byrne (foreground) is shown in a scene from “David Byrne’s American Utopia.” The filmed version of the Broadway concert helmed by Spike Lee finds the sweet spot in translating the exhilaration of live performance to the screen. (HBO via AP)

Oh hey, Borat... Somehow when we weren't looking, Sacha Baron Cohen was filming a sequel. It's typically outrageous and features a scene with Trump lawyer Rudy Giuliani for which the word "cringeworthy" just doesn't cut it. "David Byrne's American Utopia," a filmed version of the Broadway concert helmed by Spike Lee no less, finds the sweet spot in translating the exhilaration of live performance to the screen. Speaking of exhilaration, try watching @420doggface208, aka Nathan Apodaca of Idaho, peacefully skateboarding on TikTok to Fleetwood Mac's "Dreams" and drinking Cran-Raspberry juice on the way to work — a thing we somehow never knew we wanted to do.

The first post-election "SNL" ends with Alec Baldwin holding a sign that says "You're Welcome!!!" — a reference to his long-running Trump impersonation (and Trump's loss). Beyonce, already the most nominated female artist in Grammy history, scores nine more, including for "Black Parade," released on Juneteenth. In his final screen role, Boseman fittingly soars in "Ma Rainey's Black Bottom" with a searing performance as a troubled jazz trumpeter.

"My name is Elliot." Elliot Page, Oscar-nominated as Ellen Page for "Juno," announces he is trans, a landmark moment for Hollywood's transgender community. In a year with precious few blockbusters, "Wonder Woman" gears up to lasso end-of-year attention for its sequel, to be released simultaneously in theaters and on HBO Max. And speaking of blockbusters, how about Bob Dylan's deal: The 79-year-old bard sells his entire catalog for a sum estimated at more than $300 million. As a treacherous 2020 draws to a close, aren't we all just so ready, as Dylan was in 1964, for these times to be a-changin'?