First covid-19 vaccination given to nurse 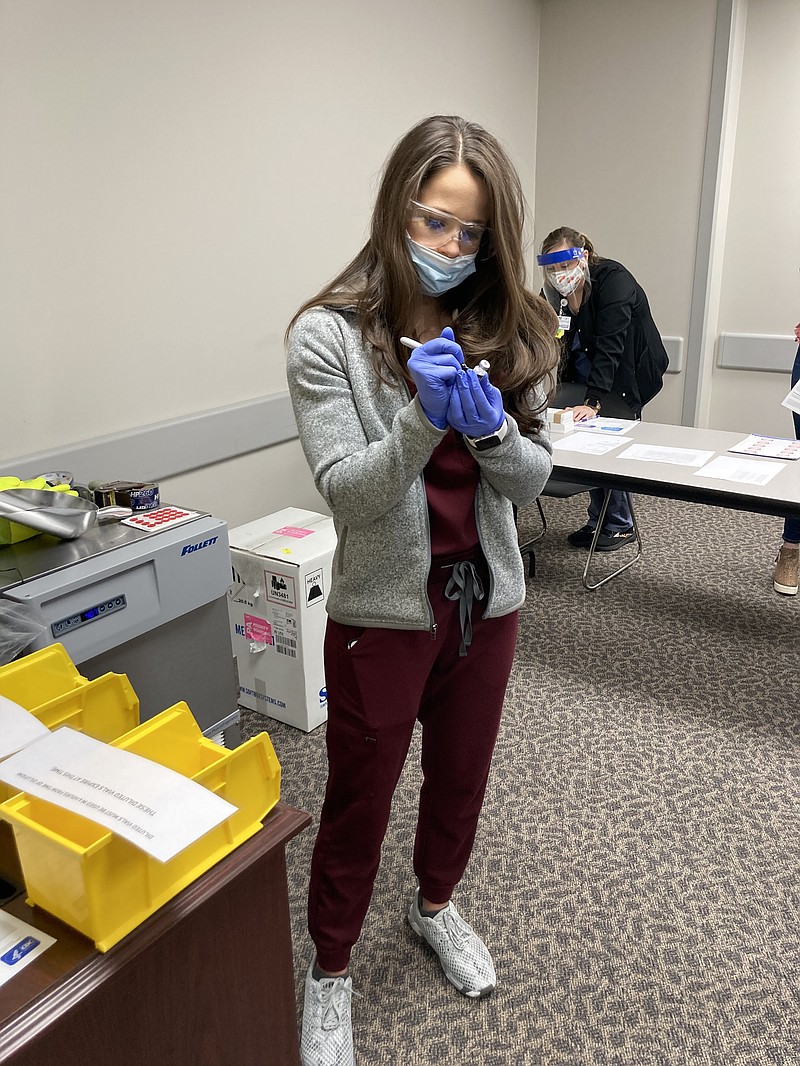 Taylor James, a pharmacist at Jefferson Regional, using saline solution, reconstitutes a vial of covid-19 vaccine on Tuesday and makes it ready to be injected. (Pine Bluff Commercial/Byron Tate)

With still cameras clicking and video cameras aimed at her, Latasha McGown on Tuesday became the first person in Jefferson County to receive a covid-19 vaccine shot.

McGown, a registered nurse at Jefferson Regional Medical Center for eight years, sat still as Tena Brooks, a licensed practical nurse, first drew the Pfizer vaccine into a syringe and then gently guided the needle into McGown's upper left arm.

Brian Thomas -- the hospital's president and CEO, who was one of a few dozen employees and others who had come to witness the event -- said it was a relief to get the vaccines in and to be able to start administering them.

"We've been waiting on this day a long time," he said.

The hospital received 975 doses at 9:30 on Tuesday morning and made good on its promise to start giving the vaccines by 1:30 in the afternoon.

As Taylor James, a pharmacist, worked to reconstitute vials of vaccine with saline solution in preparation for the shots to be given, the training room -- which had been converted to a vaccine center -- continued to fill with employees and members of the media who set up video cameras on tripods or took still photos of the goings-on.

The first shots are going to front-line health workers, first responders and nursing homes. McGown said she had been infected with covid-19 recently and stepped up to get the vaccine when it was offered to keep herself and her daughter safe. McGown said her daughter is immunocompromised and has had a liver transplant but had avoided contracting the virus when McGown had it.

Asked if she were aware that she would be the subject of such media interest, McGown said she knew she was going to be in the first wave of those getting shots but didn't know what to expect when she walked into the room.

As McGown stood talking to a reporter, Amanda Robinson, a registered nurse who was helping prep employees who were getting the shot, told McGown to "hang out for a few minutes to make sure you don't have a reaction."

Robinson, who is part of the quality and regulatory department, is a member of the hospital's covid task force, a group of medical staff and administrators who meet daily to go over the local coronavirus landscape. She said she had been working on contact tracing and following up with employees who may have been exposed to the virus or come down with it, and she said that it was a good feeling to finally have something with which to battle the virus. She said at different times, as many as 10 to 15 medical workers at the hospital had been out sick with the virus.

"I'm so grateful we have the vaccine and be able to give it to our employees," she said. "Our front-line staff has been taking care of people for months. It's good to be able to give them some help. This is going to be a great thing."

In assembly-line fashion, a second registered nurse, Latosha Love, was quickly guided to the chair just vacated by McGown and given a dose of the vaccine.

Afterward, Love said it didn't hurt a bit -- or at least not much.

"It wasn't bad," she said. "In other places, like England, they talk about how painful it can be. This was less painful than the flu shot."

"I think there's still some apprehension," he said, "but I think they will warm up to the idea of getting the shots now that they're here."

Pine Bluff became ground zero for the covid-19 pandemic in Arkansas when the first case of the virus was discovered in a patient at Jefferson Regional. Thomas said it was fitting that the hospital be at the forefront of disseminating a vaccine that, it is hoped, will finally put the brakes on and eventually defeat a disease that has killed more than 300,000 Americans.

"It's been a long 10 months," he said, referring to when the coronavirus was first detected, "and we still have a long way to go."

After front-line medical workers and others in the medical community receive shots, the next phase will include essential workers such as teachers, truck drivers and others whose jobs have been deemed critical. Those doses will be administered in late January and early February. And finally, a third tier will see the vaccine go out to average citizens in April and May, according to hospital officials.

Thomas said he hops that by spring, the effects of the vaccine will start becoming apparent.

"You've got to start somewhere," he said, "and that is what this is today. We are proud to see this day come."

Mayor Shirley Washington stood and watched the shots being administered and then talked to the nurses who had received them. She said later that she was excited about the arrival of the vaccine and that it would be "the beginning of the end of this deadly virus."

"My heartfelt appreciation goes out to our health care professionals who have fought on the front lines of the pandemic," she said. "The commitment to fight to the finish was demonstrated by the five Jefferson Regional employees who volunteered to be the first to receive the vaccine."

The shots given on Tuesday will be followed with a second round in 21 days. A second shipment is expected next week, officials said Monday, but it is not known how many doses will be allotted to Jefferson Regional or what type of vaccine will be included. Another vaccine made by Moderna could be part of what is brought in, and that vaccine requires a second shot in 28 days. 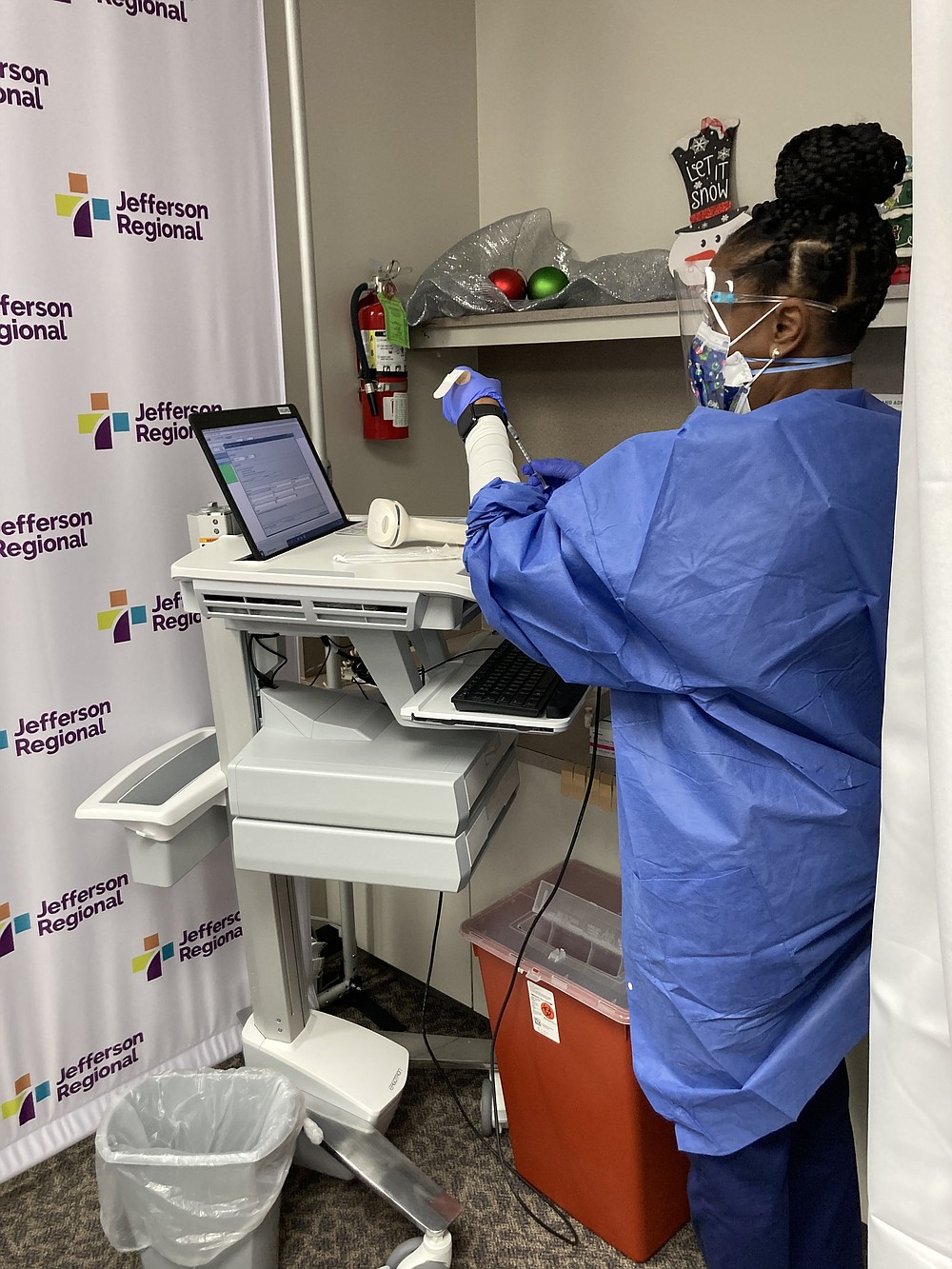 Tena Brooks, an LPN at Jefferson Regional, draws the vaccine solution into a syringe as she prepares to administer the shot. (Pine Bluff Commercial/Byron Tate) 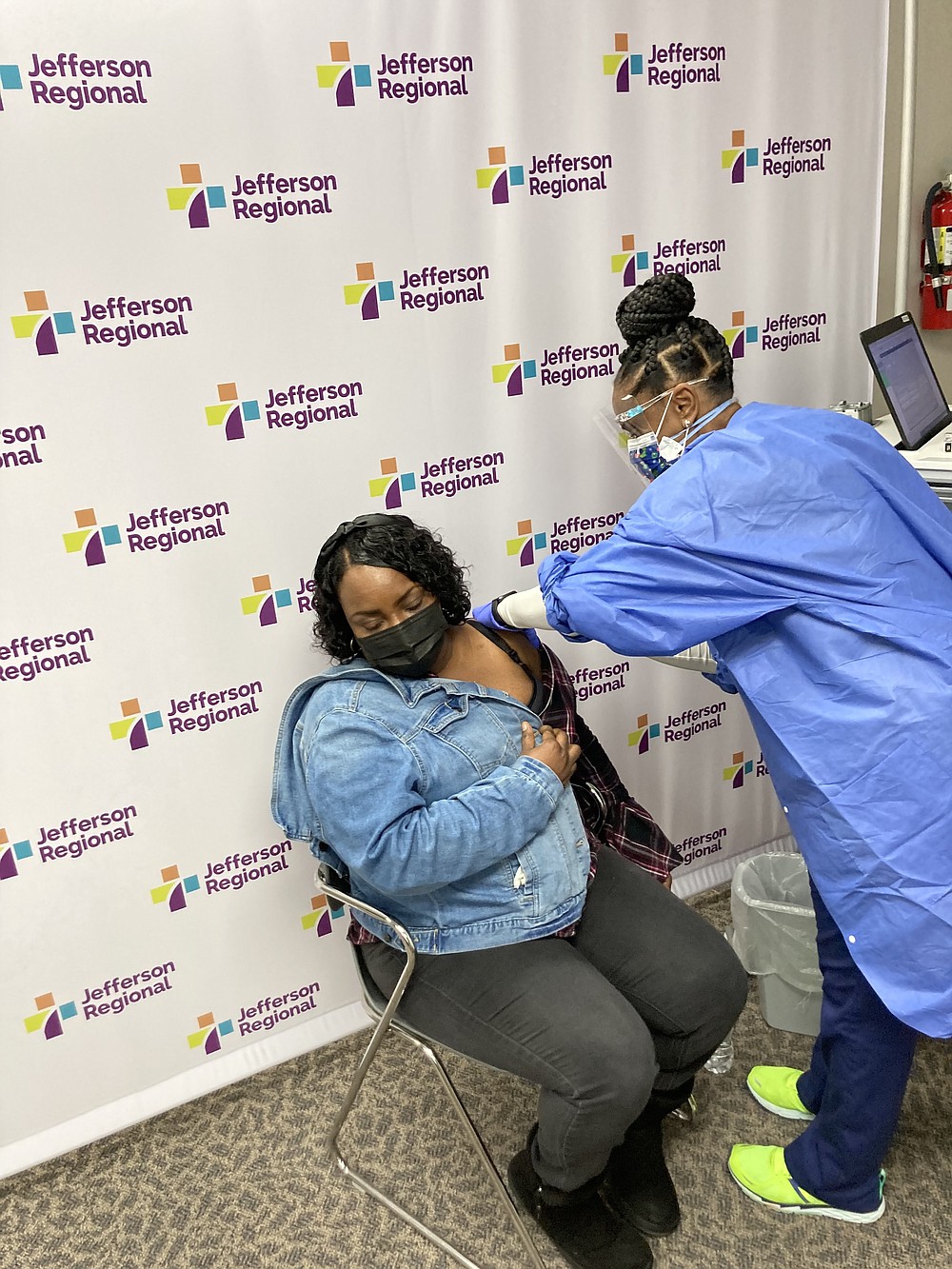 Latasha McGown, left, an RN at Jefferson Regional, prepares to get the first covid-19 vaccination in Jefferson County on Tuesday. Giving the shot is Tena Brooks, an LPN at the hospital. (Pine Bluff Commercial/Byron Tate)
ADVERTISEMENT