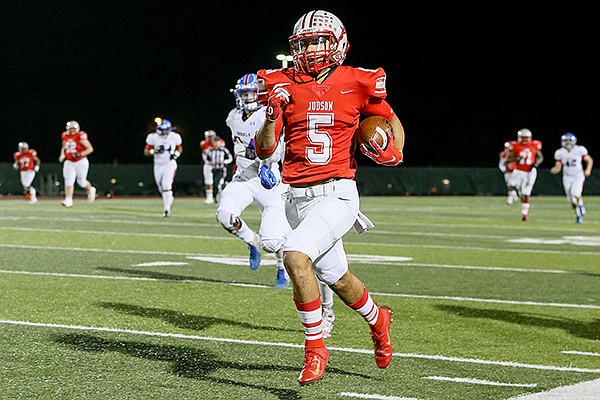 FAYETTEVILLE — Twenty-three players — several of whom have never visited the University of Arkansas campus — signed to play football for the Razorbacks on Wednesday during the first day of the early national signing period for the high school class of 2021.

Arkansas’ signing class includes 21 high school players, one Division I transfer and one transfer from a junior college. The Razorbacks’ class ranks 20th nationally, according to a composite ranking by 247Sports, and eighth in the SEC behind Alabama, Georgia, LSU, Florida, Texas A&M, Tennessee and Ole Miss.

The class is headlined by five players who have 4-star status in at least one national recruiting database — receiver Ketron Jackson of Royse City, Texas; quarterback Lucas Coley of Cornerstone Christian in San Antonio; Oklahoma running backs AJ Green of Tulsa Union and Javion Hunt of Midwest City Carl Albert; and Raheim “Rocket” Sanders from Rockledge, Fla., whose position is not specified, but is expected to be receiver or running back.

“The greatest thing I think about this class is once they were committed, they stayed committed to us,” Arkansas coach Sam Pittman said. “And I think that says a lot about our coaching staff and the relationships they had built with these guys.

“But really, really happy that there was no drama. It seems like every year at this point there’s a lot of leaving and coming and that didn’t happen to us, so really grateful for that.”

This year’s class is the first full haul assembled by Pittman who was hired last December, 10 days before the early signing period began. The Razorbacks signed only eight in the early period last year.

The coronavirus pandemic created several obstacles in recruiting this year. The NCAA has banned all in-person recruiting since March, forcing coaches to sell themselves via virtual meetings with recruits and their families.

"It was hard to prioritize time," Pittman said of the difficulties recruiting during the season. "Certainly not this week, because this week was all about recruiting because we don't have a game, but last week was hard. You're looking at covid numbers, losing kids at practice on Tuesday for whatever reason, all those different things, plus you're doing home visits at night. We had to get 23 of those in on Sunday, Monday, Tuesday, Wednesday.

"So you're looking at 45 minutes to an hour on each one of those, plus film and watching practice and preparing for practice."

None of the players who signed with the Razorbacks on Wednesday have taken an official visit to the UA campus. Some were able to meet with Pittman and his staff during unofficial visits early this year.

Most of the Razorbacks’ signees this year were committed well before signing day, but there was some last-minute intrigue Wednesday when defensive tackles Jalen Williams of Jones (Miss.) College and Cameron Ball of East Point (Ga.) Tri-Cities High School committed during private signing ceremonies that were live streamed.

Williams had an offer list that included Georgia, Ole Miss, Florida State and other Power 5 programs, and is rated the No. 1 junior college player at his position by ESPN. The Tylertown, Miss., native is expected to enroll at Arkansas next month and will have three seasons of eligibility remaining.

Ball, a 3-star recruit, was recruited by Pittman while he was the offensive line coach at Georgia, and chose the Razorbacks over offers from Georgia Tech and Arizona State. Ball had 42 tackles and four sacks as a senior.

Arkansas lost a signing-day battle with LSU for top-ranked junior college linebacker Navonteque Strong of Gulf Coast (Miss.) Community College. Strong recently backed out of a verbal commitment to Mississippi State and was offered by the Razorbacks last week.

On Tuesday, Arkansas received a commitment from transferring Penn State defensive back Trent Gordon, a former 4-star recruit from Manvel, Texas. Gordon, who signed Wednesday, could have up to three seasons of eligibility remaining for the Razorbacks, possibly as early as next season.

Among high school players, the Razorbacks signed six from Oklahoma, five from Texas, four from Arkansas, three from Georgia and one apiece from Louisiana, Missouri and Florida.

Rogers and Coley give Arkansas two quarterbacks in the class, something Pittman said was identified as a need "a long time ago." Arkansas has four scholarship quarterbacks on its roster this season, but might lose nine-game starter Feleipe Franks to pro football next year.

“Landon Rogers, obviously here in the state, very big, very athletic,” Pittman said. “I think he’s a guy that would really fit into what we’re doing offensively. He has a very strong arm. I think he’s still developing. I think he can become much better than he is right now. But he can run. He’s got really good speed, and he’s a physical guy.

“Lucas Coley is certainly a guy that’s a run and pass threat as well. Not quite as big as Landon. But he’s played good ball there in Texas and had a lot of success — very smart."

The Razorbacks signed five of the top 11-rated players in Oklahoma, according to The Oklahoman newspaper. In addition to Green and Hunt, the class includes cornerback Keuan Parker of Tulsa Booker T. Washington; receiver Bryce Stephens of Oklahoma City Marshall; defensive tackle Solomon Wright of Vian; and kicker Cameron Little of Moore Southmoore, who is rated by The Oklahoman as the state’s 30th-best player.

The Razorbacks have put an emphasis on recruiting Oklahoma under Pittman, who grew up in Grove, Okla., and was an assistant coach at the University of Oklahoma in the 1990s. Arkansas defensive coordinator Barry Odom also grew up in Oklahoma, and Razorback assistants Brad Davis and Jon Cooper played college football for the Oklahoma Sooners.