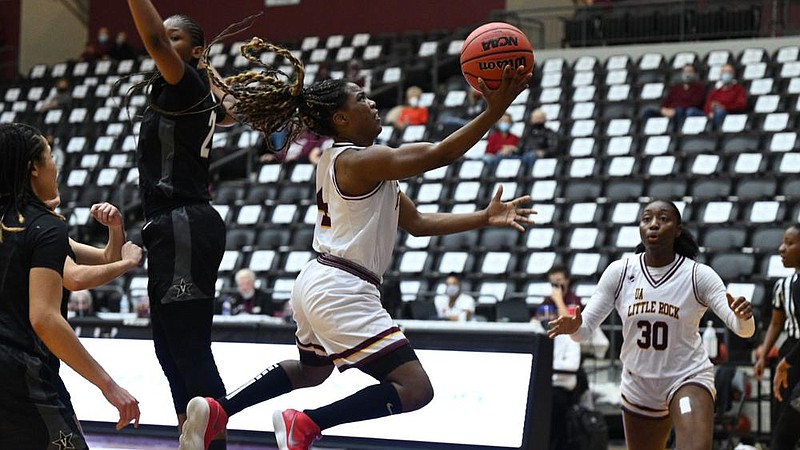 UALR guard Mayra Caicedo drives to the basket Saturday during the Trojans’ 82-74 victory over Vanderbilt at the Jack Stephens Center in Little Rock. Caicedo scored 14 points and had a school-record 14 assists in the victory. (Photo courtesy UALR Athletics)

When UALR and Central Arkansas square off at 7 tonight, the women's teams will arrive at the Farris Center in Conway on different paths.

The University of Arkansas at Little Rock (3-2) is coming off a 16-point victory against Western Kentucky and trying to clinch a winning nonconference record for the first time since 2014-15.

The University of Central Arkansas is in search of a victory. The Sugar Bears (1-4) fell to the University of Arkansas 105-58 on Sunday, the latest loss against a big-time program that includes defending national champion Baylor, TCU and Kansas State.

With a Friday night visit from the University of Arkansas-Pine Bluff before a weekend trip to No. 13 Mississippi State, UCA is looking to take its shots at home.

"What you don't want to happen -- and as you hope, as a coach, doesn't happen -- is that [early losing] destroys the confidence of your team," UCA Coach Sandra Rushing said. "I love playing these teams -- don't misunderstand that -- but at the same time, we need a win."

Conference play lies ahead for both teams, but as covid-19 looms over the college basketball season, UALR Coach Joe Foley is thankful to have made it this far with few complications but is wary of looking to far into the future.

"This season wears and tears on you a little bit right now," he said.

The Trojans, who close out their pre-Sun Belt slate Saturday by hosting Arkansas, have been powered by three newcomers.

Bre'Amber Scott -- a former Little Rock Central standout and Mississippi State transfer who sat out due to NCAA rules last season -- has become an immediate force, contributing 17.6 points and 4.4 rebounds per game. New Mexico Junior College transfer Mayra Caicedo made her mark in UALR's second win of the season, racking up 14 assists against Vanderbilt. Murray State transfer Brianna Crane has averaged 12.2 points as an immediate starter.

"There's three pieces that we didn't have last year that I think makes us better right off the bat," Foley said.

"Having them gives us options," Foley said. "That way we don't have to depend every night on certain players. Foul trouble always gets you at some point, so if we establish a little depth here early in conference, that'll help us at the end of the year and that's what I'm looking for right now."

Rushing said the Sugar Bears have held their own despite a 1-4 record.

"I felt like, with the exception of Arkansas, we met the challenge," she said.

UALR will have its hands full in keeping Jalisa Outlaw and Lucy Ibeh in check.

Outlaw, a redshirt freshman, has stepped in immediately, leading the Sugar Bears with 13.2 ppg. Ibeh, who joined UCA from Collin College in Texas, has brought Rushing's team a presence on the boards, delivering eight rebounds per game to go with 10.3 points.

Ibeh missed the Arkansas game with an injury, but she is probable to return against UALR.

"Jalisa Outlaw was injured last year, but she has been around the program. She knows what's expected, too."

UCA will lean on Outlaw and Ibeh and hopes to receive additional scoring from sophomore Terri Crawford as the Sugar Bears aim to shed a two-game losing streak.

"We need a win," Rushing said. "No matter how we get it, we need a win so they know they can win."