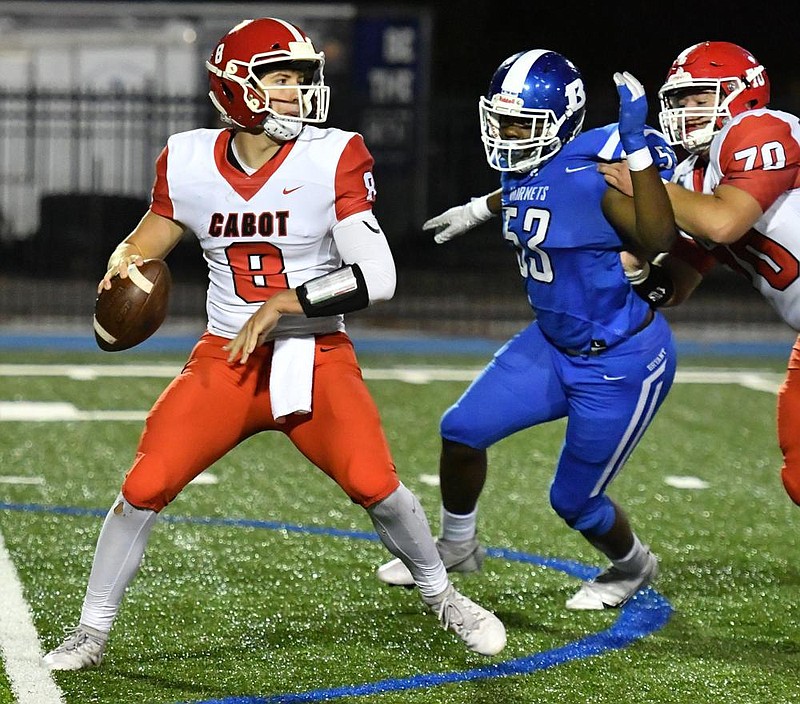 Cabot quarterback Tyler Gee (left) highlights a class of 13 players signed by the University of Central Arkansas on Wednesday. (Special to the Democrat-Gazette/Jimmy Jones)

The University of Central Arkansas announced 13 signees to the Class of 2021 on the first day of the early signing period Wednesday.

“There’s a lot of talent here in Arkansas, and I can imagine we’ll find more before the February signing day,” Brown said.

The coronavirus pandemic complicated matters for UCA on the recruiting trail, as Brown and his staff employed virtual tours and other tools in pulling recruits to Conway.

While some programs struggled with the limitations of recruiting during a pandemic, Brown saw it as an opportunity for the Bears.

“I think it leveled the playing field,” he said. “When you’re not able to go on an official visit or visit a campus … that levels it for us and some of the midmajor programs across the south”

The NCAA’s decision to grant athletes an additional year of eligibility has led to the University of Arkansas-Pine Bluff taking a cautious approach to recruiting. “We put things on pause because of the NCAA allowing everyone to not count this year for the seniors,” UAPB Coach Doc Gamble said. “It really is a roster-management deal right now for us. You can’t sign a large freshman class if you still have a large senior group of guys who haven’t decided if they’re going to come back for another year or not.

“And the biggest thing with why it’s on hold is because our season won’t start until the spring. I don’t know who wants to come back for that additional year. We’d love to have them all back because we like the kids that we have. But it puts us in a tough spot right now as far as what our roster will look like.” UAPB didn’t have a typical early signing class, but the first-year coach noted the team will have some transfers coming in. Those players won’t be announced until later.

The Golden Lions, whose 6-5 finish in 2019 gave the program its first winning record since 2012, will be the only Division I team in the state to play football in the spring. The University of Arkansas, the University of Central Arkansas and Arkansas State University all opted to play this fall.

Gamble would have loved a hefty haul signed during the early signing period, but that option was too risky.

“Our early evaluations are that some of the high school guys are really talented players,” he said. “In a normal year, we would have to fight tooth and nail to try to get them to come play for us. Some of those guys want to come … but we’re not the only university in that situation.

“We’re definitely not going to kick anybody out the door. They’ve been loyal to us so we’re going to be loyal to them. But you don’t want to wait until the last minute either, because then you’re left scrambling to try and find guys to sign.”