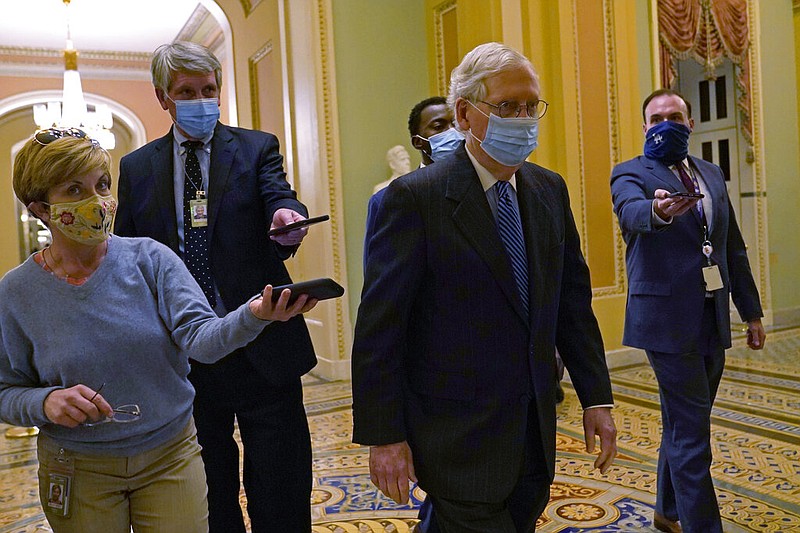 WASHINGTON — Top congressional leaders acknowledged Thursday that they will have to pass a temporary government-wide funding bill to avoid a partial shutdown Friday at midnight, though House leaders haven’t scheduled a vote yet.

The acknowledgement came as congressional negotiators on the long-delayed $900 billion covid-19 economic relief package worked through a handful of remaining hold-ups. The goal is a final agreement for more help to businesses and the unemployed, and for new stimulus payments to most Americans.

The central elements of the hard-fought aid compromise appeared in place: More than $300 billion in aid to businesses; a $300-per-week bonus federal jobless benefit and renewal of soon-to-expire state benefits; $600 direct payments to individuals; vaccine distribution funds and money for renters, schools, the Postal Service and people needing food aid.

A top negotiator warned that the current set of problems could knock the talks off track.

“Do we want to lapse into politics as usual and let negotiations lose steam? Do we want to haggle and spar like this was an ordinary political exercise?” asked Senate Majority Leader Mitch McConnell, R-Ky. “Or on the other hand, after months of inaction, do we want to move swiftly and with unusual bipartisanship to close out our issues, seal the deal, and write text that can quickly pass into law?”

It’s the first significant legislative response to the pandemic since the landmark CARES Act in March, which delivered $1.8 trillion in aid and more generous jobless benefits and direct payments to individuals. Since then, Democrats have repeatedly called for further major steps to provide relief and battle the pandemic, while Republicans have sought to more fully reopen the economy and to avoid padding the government’s $27 trillion debt.

The urgency was underscored Thursday by the weekly unemployment numbers, which revealed that 885,000 people applied for jobless benefits last week, the highest weekly total since September, as spiking coronavirus cases threaten the economy’s recovery.

President-elect Joe Biden is eager for an aid package to prop up the economy and deliver direct aid to the jobless and hungry, even though the package falls short of what Democrats want. He called the emerging version “an important down payment” and promised more help next year.

“We made some progress this morning,” said House Speaker Nancy Pelosi, D-Calif., as she entered the Capitol on Thursday.

The details were still being worked out, but more than $300 billion in subsidies for business, including a second round of “paycheck protection” payments to especially hard-hit businesses, are locked in, as is $25 billion to help struggling renters with their payments, a temporary 15% or so increase in food stamp benefits, additional farm subsidies, and a $10 billion bailout for the Postal Service.

Some Democrats also mourned the exclusion of a $500 million aid package to help states run their elections. The money was seen as urgent this summer to help jurisdictions more safely administer their elections in the middle of the pandemic. But with the election over, momentum for the money has gone away.

The emerging package was serving as a magnet for adding on other items, and the two sides continued to swap offers. It was apparent that another temporary spending bill would be needed to prevent a government shutdown. That was likely to easily pass, though possibly not until the last minute.

“If we need to further extend the Friday funding deadline before final legislation can pass in both chambers, I hope we’ll extend it for a very, very short window of time,” McConnell said.

House leaders are hoping to vote by Friday on the massive package, which would combine the covid-19 relief with a $1.4 trillion government-wide funding bill and a host of other remaining congressional business, including extending expiring tax breaks and passing other unfinished legislation.

McConnell successfully pushed to get Democrats to drop their much-sought $160 billion state and local government aid package while giving up a key priority of his own — a liability shield for businesses and other institutions like universities fearing covid-19 lawsuits. Democrats cited other gains for states and localities in the emerging deal such as help for transit systems, schools and vaccine distribution.

The addition of the $600 direct payments came after recent endorsements from both President Donald Trump and progressives including Sen. Bernie Sanders, I-Vt., who remains dissatisfied about the overall package.

Pressure for a deal is intense. Unemployment benefits run out Dec. 26 for more than 10 million people. Many businesses are barely hanging on after nine months of the pandemic. And money is needed to distribute new vaccines that are finally offering hope for returning the country to a semblance of normalcy.

The looming agreement follows efforts by a bipartisan group of rank-and-file lawmakers to find middle ground between a $2.4 trillion House bill and a $500 billion GOP measure fashioned by McConnell.

Their $908 billion proposal has served as a template for the talks, although the bipartisan group, led by Sens. Joe Manchin, D-W.Va., and Susan Collins, R-Maine, favored aid to states and localities instead of another round of stimulus payments. The CARES Act provided for $1,200 payments per individual and $500 per child.

“I think that the work that our bipartisan group did really helped to stimulate this,” Collins said.

This story was originally published at 11:47 a.m. under the headline “Final stretch on covid-19 economic relief, but no deal yet.”