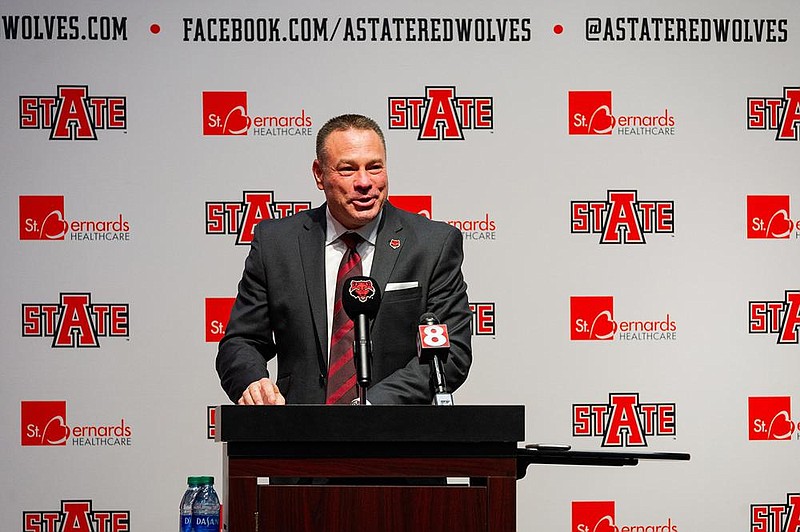 JONESBORO — The search for Arkansas State University’s next head football coach actually began formulating about a year ago.

“Blake [Anderson] was a finalist for a couple of jobs last season,” ASU Athletic Director Terry Mohajir said Wednesday during a news conference to introduce Butch Jones as the new ASU head coach. “We started this process probably back then.”

Anderson stayed in Jonesboro one more season, but the process kicked into high gear last Thursday when he left for Utah State. Two days later, ASU announced that Jones, 52, would be the 31st coach to lead the program.

“I knew once this process started, I wanted it to be quick, but I didn’t want to hurry,” Mohajir said.

Four days after his hiring, with a backdrop of the first day of the early signing period, Jones was introduced inside the athletic operations center of Centennial Bank Stadium.

In a subdued event that required masks, social distancing and an effort from Mohajir himself to rile up the limited crowd, Jones offered his vision for the program. He laid out the work he and his staff have done already, and he explained the appeal of the ASU job.

“When you look at a program you always look at the past, because it’s a great illustration of the future,” Jones said. “I want to be in a football program that has high expectations and great expectations. Everybody expects to win here.”

Jones, the former head coach of Tennessee, Cincinnati and Central Michigan, comes to the Red Wolves after three seasons as an assistant with Alabama.

As of Wednesday, his contract remained unfinished, but a letter of agreement signed by Jones and Mohajir indicates the five-year contract will pay him $825,000 annually, the same salary paid to Anderson.

The agreement’s buyout clause begins at $2 million in the event Jones leaves during the first year of his contract. It reduces year-over-year through its completion in 2025. It also has performance-based incentives, including a one-year extension after each season the Red Wolves earn eight victories over FBS opponents.

“You can learn a lot from watching videos,” Mohajir said.

In more concrete research prior to making the hire, Mohajir also spoke to Alabama Coach Nick Saban, Jones’ boss from 2018 through last weekend.

Upon Anderson’s resignation, Mohajir first made contact with Jones on Thursday. Mohajir declined to disclose how many candidates were considered for the opening.

In several conversations and a formal interview with Jones ahead of Alabama’s trip to Arkansas on Saturday, the search narrowed and ASU secured the head coach who fit the profile it had established.

“That’s the kind of person that we needed at this particular time to lead our program.”

Jones’ introduction, as he noted several times, came just 92 hours after he stood in front of his new team Saturday evening.

“6 p.m. in this room, we met our football team,” he said. “I’ll tell you what, the energy, the excitement that our kids displayed that night, I knew that this team has a chance to do some very special things.”

Jones’ evaluation of his program’s personnel began not long after that meeting.

With much of his coaching staff still to be completed, Jones already has hired three assistants who worked with him at Tennessee in Matt Wilson (player personnel), Jon Shalala (defense) and Derrick Lett (wide receivers). Brandon Joiner, who has been with the Red Wolves since 2016, was retained Sunday and will coach ASU’s defensive line.

Ryan Aplin, the former Red Wolves quarterback, did not receive a mention from the new head coach, but has been pictured back in ASU’s football facility and is reportedly set to coach running backs.

Jones set a goal of meeting with each individual player before the team is dismissed this week for the holidays. He also is seeking ways to improve his roster.

Earlier in the week, Saban said in a news conference that he expected Jones to be involved in the remainder of the No. 1 ranked Crimson Tides’ season, and Jones confirmed that Wednesday. If Alabama defeats Florida in the SEC title game Saturday, “I’m planning to be part of the playoff run,” he said.

But Jones maintained his program in Jonesboro remains the priority.

“My first obligation first and foremost is to Arkansas State. We have to make sure our program is ready to go,” he said.

Some time during the nearly hour-long event, Jones recalled a metaphor a coaching peer shared with him during his time at Alabama.

The coach told Jones he was at the “halftime of his career.” In Tuscaloosa, he was given a chance to make some metaphorical midgame adjustments, and to reflect on his proverbial first half — the good, the bad and the ugly.

Jones’ colleague said that gave him a “distinct competitive advantage over everyone else.”

Halftime is over, and now Jones will put his adjustments in play at Arkansas State.