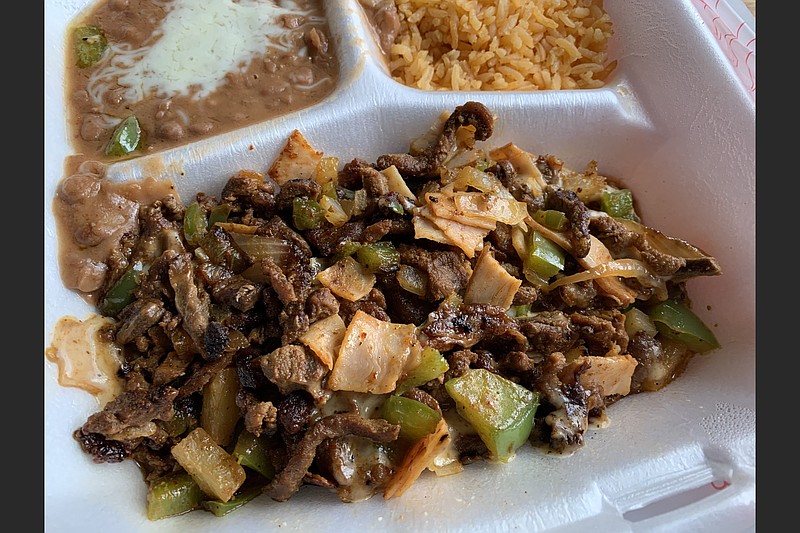 After taking off for a week, we’re taking off on the takeout trail again. We were headed south of the border before a Southern fried chicken establishment headed us off.

The fundamental rules apply: one meal per restaurant, at least most of the time; no chains, with the occasional exception (see below); a 15-minute radius, ideally, from home base to keep meals hot or respectably warm; and we pay up front for all meals.

Taqueria el Palenque is one of the Mexican restaurants we frequently recommend, even though it has been long enough since we were there that we didn’t know it had opened a second dining room in the next-door storefront. The food is authentic, it’s good and it’s relatively inexpensive — the proof is that the clientele, every time we’ve been in, is about 90% Hispanic. Our excellent Plato Alembre was a melange of nicely spiced steak, marinated pork, ham, pineapple, bell peppers and onions, with side rice, cheese-topped refried beans, flour tortillas and a salad garnished with chunks of fresh avocado.

Initially there didn’t seem like much of the lightly spicy cheese dip in the foam to-go cup, but there was actually quite a lot of it, and with more than enough fresh, crisp chips. Unlike many restaurants’ white queso, this didn’t clot or form a surface skin; the consistency stayed consistently smooth enough to drink. (And yes, that is how we finished it once the level in the cup got so low that it was hard to dip the chips.)

HOW IT WENT/HOW IT’S GOING: Both dining rooms are open; we were unable to track down a menu online. So we walked in and placed and paid for our lunchtime order. It took about 10 minutes to come out of the mostly open kitchen, which is a fairly long time for a Mexican place, but we were behind several other to-go and in-house orders, some of them large. Even with the new dining room, it’s a small place; the front dining room had one large party at a pair of tables and a smaller party in one of the booths and there were several customers in the back dining room. The tables, had they all been full, would have been too close together for proper social distancing; as it was, with the press of to-go customers, it was difficult to always maintain a good, safe-feeling distance while waiting for food. 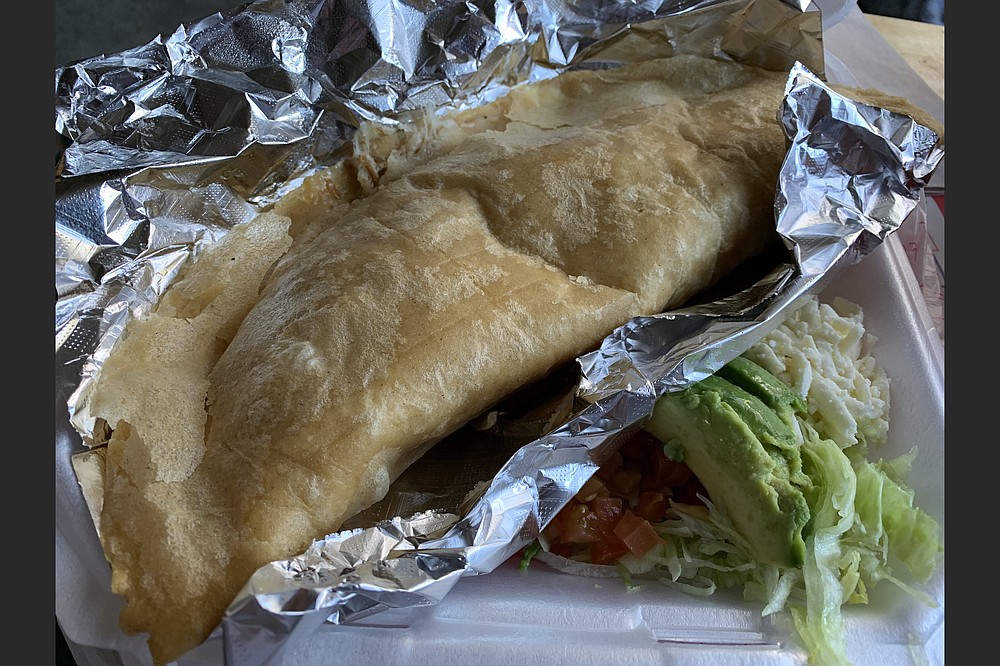 We could have fed two on the fried carnitas quesadilla on a corn tortilla from Tortas Mexico in North Little Rock. (Arkansas Democrat-Gazette/Eric E. Harrison)

We worked our way through the menu and settled on a quesadilla (other worthwhile options: tacos and tortas). The woman who took our order asked us, in part through another staff member who served as translator (necessary both because we speak very little Spanish and because all parties involved were wearing masks) whether we wanted a corn or flour tortilla — that’s not unusual — and whether we wanted it fried, something we had not expected. We said “corn” and “OK, yes, fried.” We opted for carnitas (shredded, marinated pork roast) for filling. We envisioned something along the modest lines of quesadillas past in terms of size. What we got, however, when we opened our foam clamshell, was an enormous folded-over, crisp-fried corn tortilla that would have easily served two, bulging with lean, tasty, moist carnitas and some melted cheese. Wow.

But it was the guacamole that really made the trip worthwhile — a generous portion of a near-perfect balance of fresh avocado, garlic, onion, cilantro and citrus that continued to please our palate from first bite to the last little bit we scraped out of the plastic bowl.

HOW IT WENT: Mexican food for Thanksgiving lunch? Hey, we gave thanks that the place was open and serving. We placed and paid for our order in person and waited about 15 minutes for our food, longer than most Mexican-food waits, out front by our car for the staff to bring it to us.

HOW IT’S GOING: The dining room is partially open — we saw one occupied table — and there were also a couple of to-go customers about 1 p.m. on a national holiday. 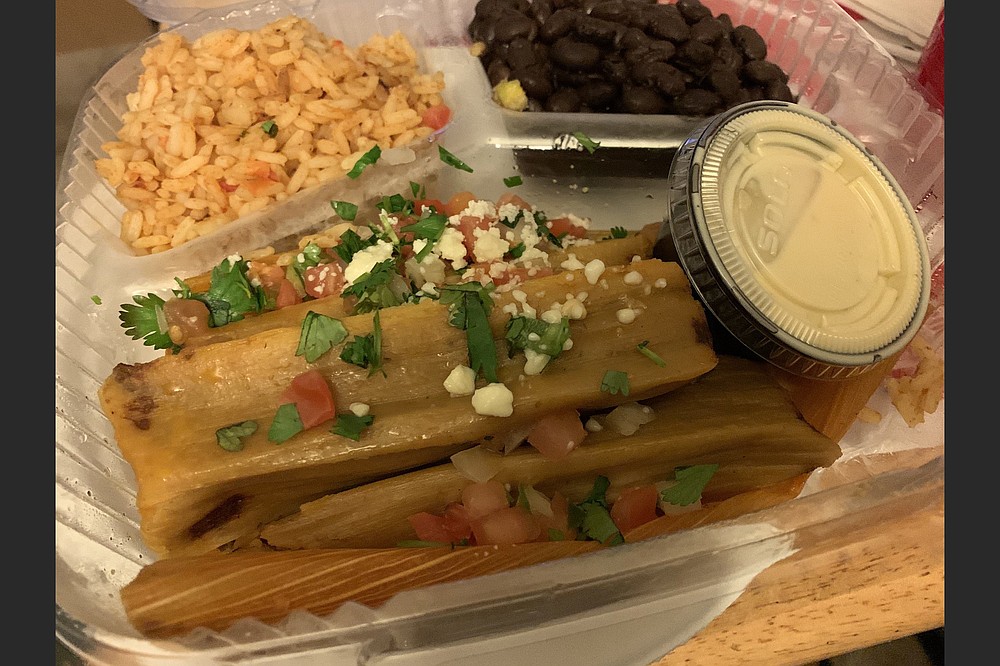 The Fold is one of the few Riverdale restaurants we had not yet gotten around to visiting for takeout, in large part because for some time it has only been open for dinner and not open on Monday. The upscale menu is more Southwestern than Mexican, though there’s some degree of Mexican ancestry.

Take the tamales, cornmeal casings with, in this case, a shredded beef tenderloin filling, topped with pico de gallo, cilantro and crumbled queso fresco, with a little cup of side queso, resting on a corn shuck. They were tasty, though there were a few gobbets of inedible fat in the beef tenderloin, but they were small — if they hadn’t come with sides (a tolerable “Mexican” rice and some tangy black beans), we’re not sure we’d have considered it a full meal. The guacamole was plentiful, though pricey, and tasted mostly of avocado with little if any garlic, onion or even citric accents. It was a bit of a disappointment even if we weren’t comparing it to Tortas Mexico’s (see above), which we unfortunately were.

HOW IT WENT: We placed and paid for our order online through The Fold’s convenient process, and a staff member delivered it to us at curbside. The two “curbside” parking spots are a little inconvenient, not to pull into, but to pull out of; exiting involves backing out onto what is frequently a heavily trafficked Old Cantrell Road. Ours was the only vehicle in them at the time, however, so it was a little easier than it might have been if we’d had to dodge another car.

HOW IT’S GOING: The Fold offers indoor and under-tent-outdoor dining with heaters. There were a couple of occupied tables in each space fairly early on a weekend evening. 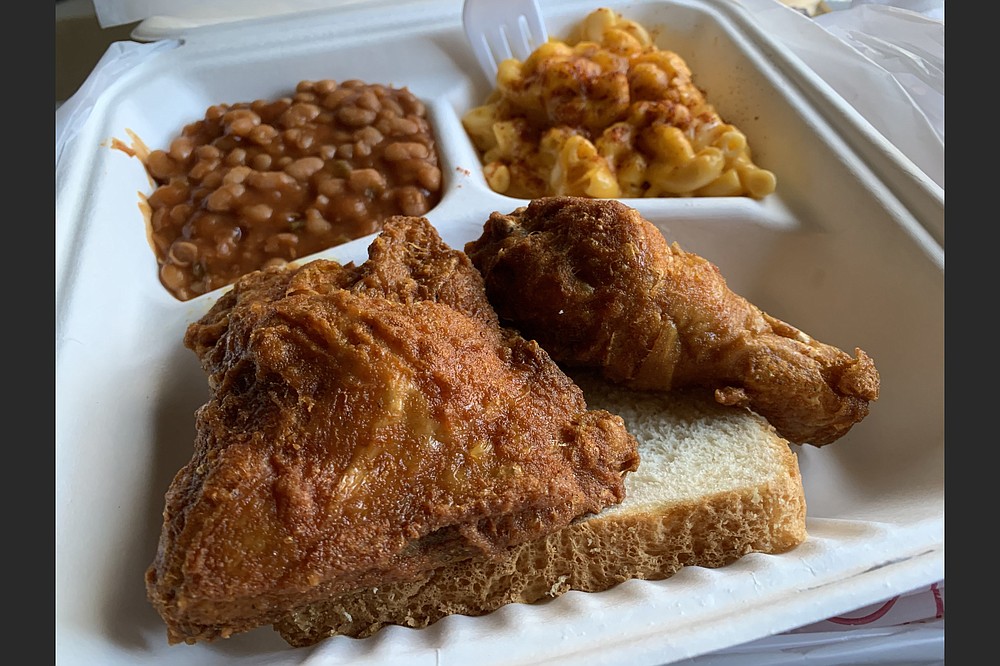 Gus’s is part of a Memphis-based mini-chain, but has only the one Arkansas outlet (in the River Market; a second in west Little Rock went under some years back). It gets regular honors from customers and voters in foodie polls for the excellence of the fried chicken. And who are we to disagree? Our leg and thigh were fried up brown — literally and figuratively — with a crisp shell outside and moist meat within. The pieces were of decent size and with the two sides — some moderately tasty mac & cheese and some decent barbecue baked beans, plus the slice of white bread on which the chicken rested, we made a pretty hefty meal.

HOW IT WENT: The dining room is open but, knowing that in the past we’ve waited upward of 20 minutes for our order (because the kitchen fries all chicken to order), we made the wise choice of calling it in. (There’s an online order system but it was a bit balky.) We got there just a couple of minutes ahead of our order being ready.

HOW IT’S GOING: There were several occupied tables in the dining area, and at least two other to-go orders in front of and behind us.