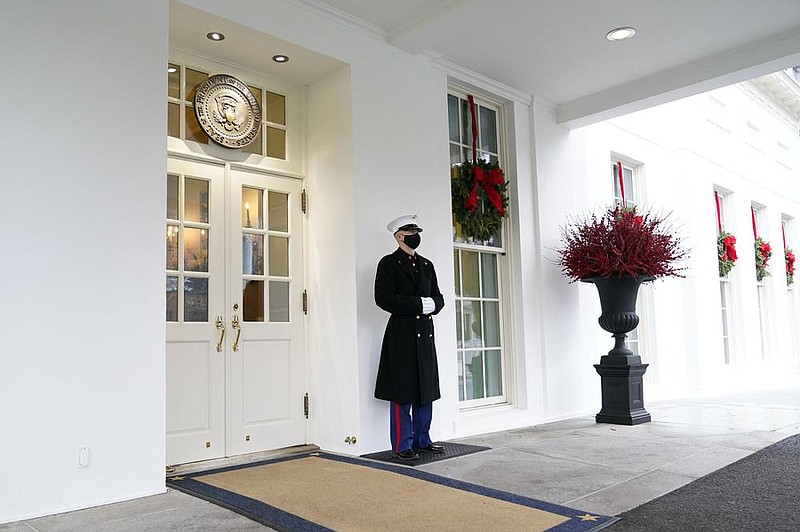 A Marine stands guard Wednesday outside the West Wing of the White House, indicating President Donald Trump was in the Oval Office. Still fighting the election results, Trump claimed in a tweet that he did better than voting projections in swing states he lost, “but bad things happened.” He pleaded with Senate Majority Leader Mitch McConnell and other Republicans to reconsider their acceptance of the Electoral College vote. (AP/Susan Walsh)

“ Mitch, 75,000,000 VOTES, a record for a sitting President (by a lot). Too soon to give up,” the president tweeted early Wednesday. “Republican Party must finally learn to fight. People are angry!”

The Electoral College cast 306 votes for Biden on Monday, formalizing his victory.

Before Tuesday, McConnell was among a majority of GOP lawmakers in both chambers who had declined to acknowledge Biden as the incoming president. But in a speech on the Senate floor Tuesday, McConnell said he accepted the Electoral College results.

“Many of us hoped that the presidential election would yield a different result, but our system of government has processes to determine who will be sworn in on January 20. The Electoral College has spoken,” McConnell said. “So today, I want to congratulate President-elect Joe Biden. The president-elect is no stranger to the Senate. He’s devoted himself to public service for many years.”

McConnell and other GOP leaders Tuesday also urged Senate Republicans in a conference call not to join an effort led by House conservatives to challenge the Electoral College results when Congress tabulates the vote on Jan. 6.

McConnell and his lieutenants, including Sens. John Thune of South Dakota and Roy Blunt of Missouri, warned the senators off any Electoral College challenge, according to one of the people familiar with the call. The GOP leaders further warned senators that forcing their colleagues into a vote on Electoral College challenges would prove difficult, especially for those facing their own reelections in 2022.

No Republican senator spoke up in contradiction.

Such a dispute would yield a “terrible vote” for Republicans, McConnell told the senators, according to two people granted anonymity to discuss the call, which was first reported by Politico. They would have to choose whether to back Trump or publicly buck him.

Republicans worry that a prolonged fight over the electoral ballots could aggravate GOP divisions and hurt turnout in the Jan. 5 runoff election in Georgia, where two incumbent Republican senators, David Perdue and Kelly Loeffler, face Democratic challengers Jon Ossoff and Raphael Warnock in a state that flipped in November for Biden.

Among the Republican lawmakers to join McConnell in accepting the Electoral College’s results Tuesday was Sen. Shelley Moore Capito, R-W.Va. “I think as hard as the losses are to take, at the end of the day, you have to accept what the people’s voices told you,” she said.

On Twitter, Trump pleaded with McConnell and other Republicans to reconsider. The president claimed he did better than voting projections in swing states he lost, “but bad things happened.”

Some of the president’s allies also lashed out at the Senate’s top Republican on Tuesday, with Trump-aligned attorney L. Lin Wood calling him “a traitor to American Patriots.”

“His day of judgment is coming,” Wood tweeted.

“You typically don’t use the term ‘congratulations’ when someone just stole a bank,” said Charlie Kirk, founder of the conservative youth organization Turning Point USA.

Sentiments among some people in the Republican Party are running particularly high.

In North Carolina, state Sen. Bob Steinburg, a Republican, paraphrased in a Facebook post a conservative commentator suggesting Trump should declare a national emergency, suspend civil rights and remain in power over his claims of election fraud.

Asked by a TV station Tuesday whether he stands by those sentiments, Steinburg doubled down, insisting that nefarious forces had corrupted Biden’s victory.

“President Trump must declare a national emergency,” the 72-year-old state senator wrote in the post, which has since been deleted. “Trump should also invoke the Insurrection Act.”

The Insurrection Act, which was signed into law by President Thomas Jefferson in 1807, would allow the president to deploy military forces on U.S. soil.

Steinburg also suggested in the Facebook post that the president suspend habeas corpus, which allows people to challenge unlawful imprisonment, “as Lincoln and FDR have both done in times of war.” President Abraham Lincoln did so during the Civil War. President Franklin D. Roosevelt did so during World War II so that officials could force Japanese Americans into camps.

Steinburg stood by the post speaking to WRAL on Tuesday, while referring to a number of theories about the election.

The state senator claimed that the Supreme Court justices had declined to hear the challenge last week because “somebody’s got something” on the highest judicial officers in the nation. He claimed that unnamed FBI and CIA agents who live in his district had told him so. He also alleged that federal law enforcement officials have refused to intervene in a “coup d’etat.”

Steinburg’s demands were echoed by Chase, who is running for the Republican nomination for Virginia governor.

“The American people aren’t fools,” she wrote in a Facebook post Tuesday. “We know you cheated to win, and we’ll never accept these results.”

Chase advocated for Flynn’s suggestion earlier this month that the president “suspend the Constitution” and “have the military implement a national revote that reflects the true will of the people.”

Steinburg said Tuesday that he would support Trump if he suspended civil rights protections to detain his political enemies and change the election result.

“If that’s what needs to be done, if there are people who have been identified as folks who are suspected of high crimes and misdemeanors, who are threatening the very security and foundation of our nation,” Steinburg told WRAL, “for whatever period of time it takes to round them up, then yes.”

Information for this article was contributed by Timothy Bella and Katie Shepherd of The Washington Post; and by Lisa Mascaro, Mary Clare Jalonick and Aamer Madhani of The Associated Press.