UALR rounds up Outlaw and UCA 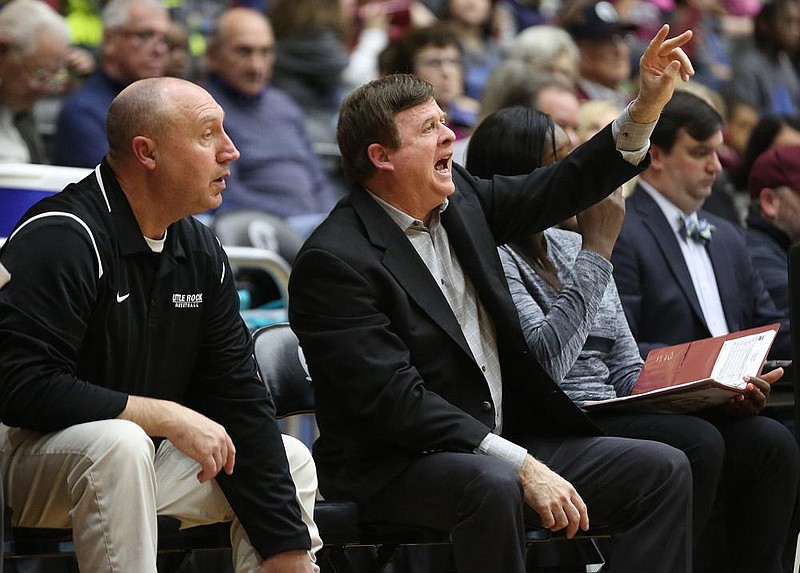 CONWAY — There was an Outlaw on the loose Wednesday night at the Farris Center — sharp-shooting UCA guard Jalisa Outlaw — and it took Coach Joe Foley’s UALR defenders more than a quarter to track her down.

“You know, that’s all we talked about,” Foley said, “that she can shoot the three.”

Outlaw, a redshirt freshman, hit back-to-back three-pointers in the game’s opening 59 seconds to give the University of Central Arkansas a 6-0 advantage, but the Trojans silenced her in the second half and pulled away for a 60-50 victory.

The University of Arkansas at Little Rock (4-2) is guaranteed a winning nonconference record for the first time since the 2014-15 season when the Trojans advanced to the second round of the NCAA Tournament.

The Trojans face an NCAA Tournament-like test Saturday at the Jack Stephens Center against No. 12 Arkansas, and anybody who compares UALR’s 10-point margin of victory over UCA with Arkansas’ 105-58 victory over the Sugar Bears on Sunday may not think the Trojans have a chance.

“Arkansas going to beat us 40,” Foley said, when asked about the comparison. “They beat them 50. Is that what they’re going to do?”

Don’t think for a minute that Foley and the Trojans will concede.

“That’s the reason you toss it up,” he said.

“I thought she made some really good plays,” Foley said of Scott, who also committed seven of the Trojans’ 19 turnovers. “Little loose with the ball with the turnovers. Overall, offensively, she gets us going.”

The Trojans trailed by five twice early in the second quarter before gaining a 31-26 halftime lead.

Outlaw scored 13 of her 14 first-half points in the first 12 minutes, but was held to six points the rest of the way. She finished with 19 points on 6-of-18 shooting, including 4 of 12 on three-pointers.

“We made a couple of adjustments and got after it a little better,” Foley said of UALR’s defense, which limited UCA to 9 of 26 from the field in the second half, including 2 of 6 on three-point attempts. “We let them drive just a little bit too much. Got to do a better job on that.”

UCA Coach Sandra Rushing’s Sugar Bears (1-5) came out hard in the first quarter, and they continued to battle in the second half, tying the game at 35-35 on a three-pointer by Romola Dominguez at the 5:06 mark of the third quarter.

It was UCA’s final three-point basket, and the Sugar Bears never regained the lead in the second half as the Trojans tightened their defense.

None of it was any consolation to Rushing.

“I thought we had the opportunity to win,” Rushing said. “I thought we came out fighting hard. It’s the same pattern over and over. We lose sight of our game plan if something doesn’t go right. We were out of sync offensively.”

Foley said he knew the Trojans were going to face a difficult test Wednesday, no matter what UCA’s margin of defeat was against Arkansas.

“They played with a lot of intensity, a lot of enthusiasm,” Foley said of UCA. “They were ready to play.”

UALR, which has played three games in six days, will play its fourth game in nine days Saturday.

“I think this will give us a little pep in our step right here,” Foley said. “I knew it would be a tough one. That was good for us, to be able to win on the road, keep our composure. That was a good test for us. We needed that.”