Arkansas Coach Sam Pittman is shown in this photo.

FAYETTEVILLE -- It should come as no surprise that Arkansas Coach Sam Pittman is a fan of the offensive linemen the Razorbacks have signed in their 2021 recruiting class.

Pittman and offensive coordinator Kendal Briles said they understood the program's need to get bigger up front. They felt like they did Wednesday with the signings of offensive linemen Terry Wells of Wynne, Cole Carson of Bogata, Texas, and Devon Manuel from Arnaudville (La.) Beau Chene.

Manuel and Carson are consensus 3-star prospects. Wells is rated a 4-star by 247Sports.

"We addressed [size] up front with three offensive linemen we feel like are big men that are going to help us," Briles said. "They'll come in and compete. ... We felt like we needed to get bigger up front.

"I think that the frames that we're bringing in [combined] with our strength staff, we'll be able to do that."

Wells -- the top-ranked recruit in Arkansas according to Rivals, and rated No. 2 by ESPN and 247 Sports -- has the potential to turn into an excellent offensive lineman, said Pittman, who added that at 6-5, 306 pounds, Wells possesses great feet and is a cerebral player.

Wells signed with the Razorbacks over scholarship offers from Miami, Mississippi State, Arkansas State and other programs. He was Arkansas' first 2021 pledge, committing during an unofficial visit to Fayetteville in February.

Size was not necessarily the first thing that caught Pittman's eye when recruiting Manuel, who is 6-8, 292 pounds. Instead, it was his skillset on the basketball court, where he averaged 4.6 points, 7.1 rebounds and 1.8 blocks per game last season.

"I think the first few clips that I saw on him, watching him, was from playing basketball," Pittman said. "He's a very good basketball player, very light on his feet. I don't know if 'raw' is the word, but I think there's a lot of things we can do there to help him technique-wise and things of that nature."

Manuel was rated the No. 28 player in Louisiana and 78th-best offensive tackle in the 2021 class. He held an offer list that included Iowa State, Michigan State, Houston and Louisiana-Lafayette.

"He was very well coached in high school, but I think when he gets here, the sky's the limit because he is very athletic and he's huge," Pittman said. "Those are the type of kids we need in our program on the offensive line."

Carson is among the more interesting personalities in the Razorbacks' class. The 6-5, 290-pound lineman co-owns a 400-acre ranch with his grandfather in east Texas.

On the field, Pittman said he is impressed with Carson's natural ability to explode through his hips. As a senior, he graded out at 90% and recorded 6 pancake blocks and 11 knockdowns.

"The only thing with Cole was I wanted to see how big he was," Pittman said. "He's as big or bigger than [former Arkansas lineman] Frank Ragnow was. I remember thinking that whenever I first met him. I loved him because he had his name on the back of his belt.

Pittman noted that Arkansas has a scholarship available and three others the program can count toward next year's class. The staff will focus on adding depth up front with those spots.

"In my mind, we have four scholarships left and those are going to go to O- and D-linemen," Pittman said. "You'd like to go four and four on the O- and D-lines [in each class]." 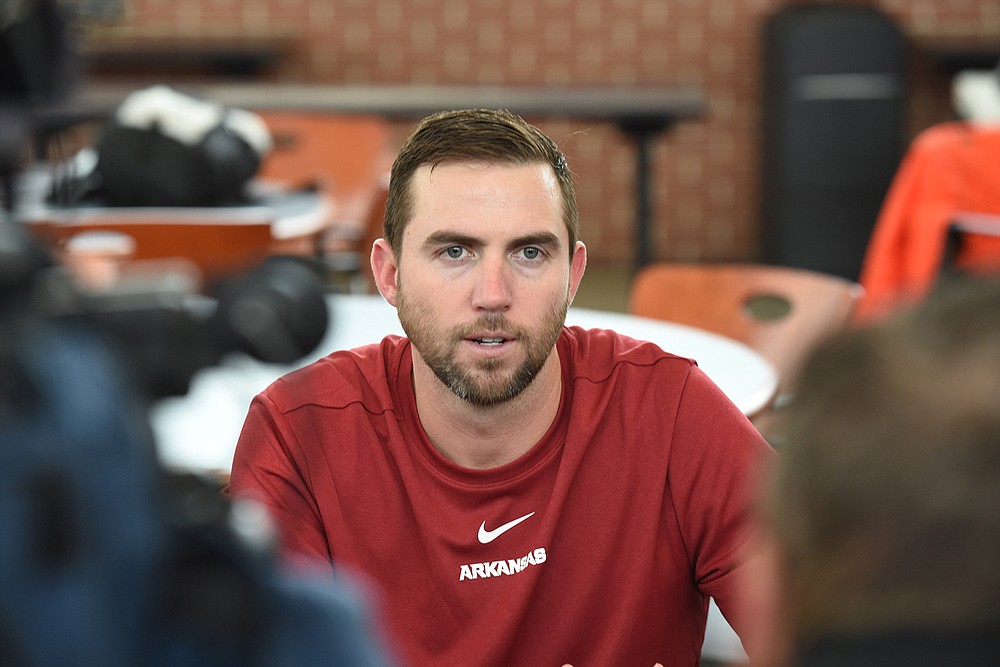