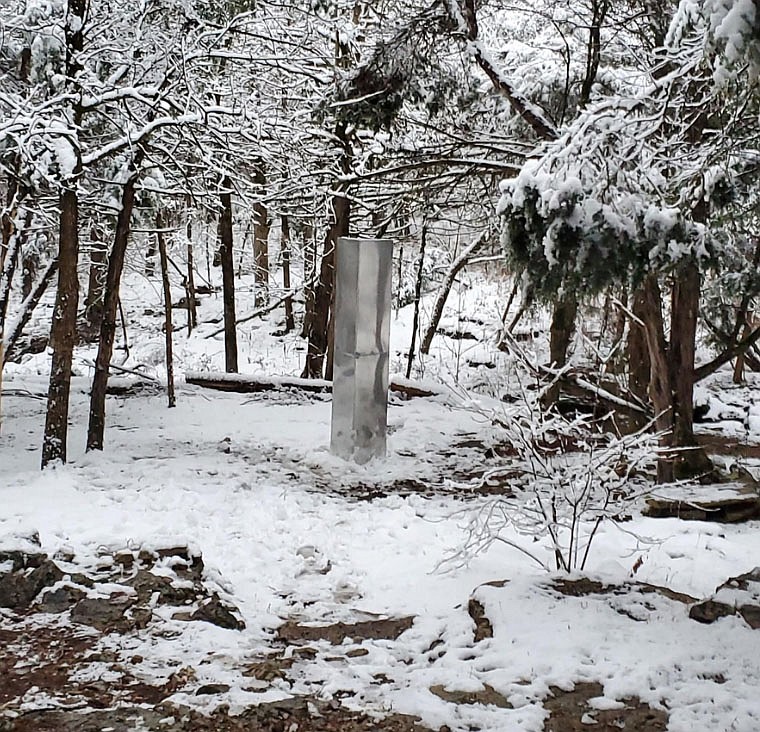 Jon Walker, owner of The Farm Campground near Eureka Springs, swears that a silver monolith appeared on his property Sunday and had disappeared by Thursday morning. (Courtesy Photo)

We intended today to direct you to The Farm Campground & Events location in Eureka Springs -- not for a music festival, but to view the monolith spotted there Sunday.

Yes, monolith, like the ones that have been popping up all over the world.

But you can't go see it, according to Jon Walker, owner of The Farm. It disappeared sometime before Thursday morning.

Walker swears that it really existed and that he doesn't know where it came from or how it left.

"It could be people playing tricks on me," he admits. "But it was here. We had people driving from all over to see the thing. My birthday was Wednesday, and I spent all day fielding phone calls about it. And then it was gone."

According to a press release, one of Walker's neighbors, Skye Pollard, first spotted the metal structure.

"I was pretty shocked. I decided to go out in the truck and look at the snow at the Farm Campground," the press release quoted him as saying. "I was driving around the campground on Sunday around 3 p.m. and noticed something shiny in the 'nest' area. I hopped out of my truck and headed down through the trees only to see a shiny 10-foot tall monolith."

Walker says simply, "I've seen a lot of crazy things in my time, so this really [didn't] surprise me much. However, it was a bit surreal."

The Farm is host to a music festival called Spaceberry over the Fourth of July weekend, and Eureka Springs is, of course, home to the Ozark Mountain UFO Conference.

"Yeah, it seems fitting that a monolith appeared here because of our Spaceberry event," Walker says. "What blows my mind is that we have cameras monitoring all inbound and outbound vehicles, and there is nothing on film depicting any unknown vehicles. I have no clue how anyone would have even gotten that it in here without us knowing!"

Or gotten it out.

The next event scheduled at The Farm is Spaceberry July 2-3, but who knows? Walker is hoping the monolith reappears before that.