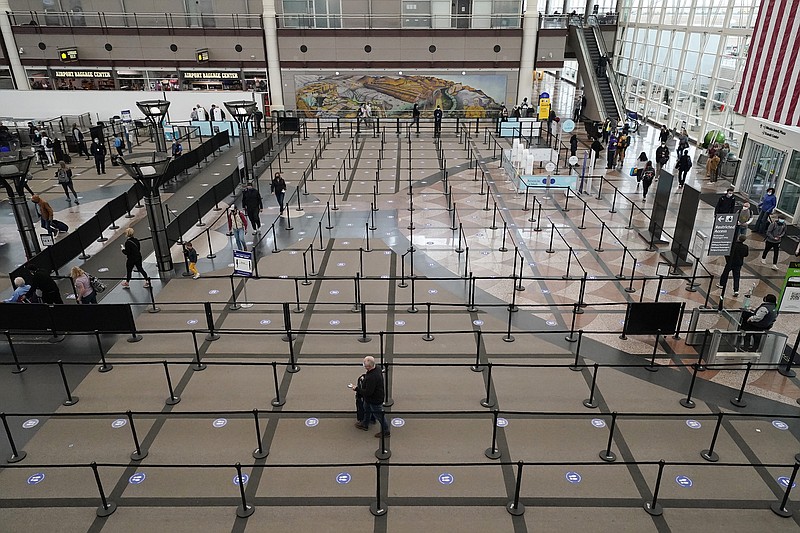 Travelers head through a security checkpoint check at Denver International Airport earlier this month. Officials fear excessive travel during the holidays could lead to another coronavirus surge. More photos at arkansasonline.com/1219spread/. (AP/David Zalubowski)

Tens of millions of people are expected to travel to family gatherings or winter vacations over Christmas, despite pleas by public health experts who fear the result could be another surge in covid-19 cases.

In the U.S., AAA predicts that about 85 million people will travel between Wednesday and Jan. 3, most of them by car. If true, that would be a drop of nearly one-third from a year ago, but still a large movement of people in the middle of a pandemic.

Jordan Ford, 24, who was laid off as a guest-relations worker at Disneyland in March, said he plans to visit both his and his boyfriend's families in Virginia and Arkansas over Christmas.

"It is pretty safe -- everyone is wearing a mask, they clean the cabin thoroughly," said Ford, who has traveled almost weekly in recent months from his home in Anaheim, Calif., and gets tested frequently. "After you get over that first trip since the pandemic started, I think you'll feel comfortable no matter what."

Experts worry that Christmas and New Year's will turn into super-spreader events because many people are letting down their guard -- either out of pandemic fatigue or the hopeful news that vaccines are starting to be distributed.

"Early on in the pandemic, people didn't travel because they didn't know what was to come," said Dr. Peter Chin-Hong, an infectious-disease expert at the University of California, San Francisco, "but there is a feeling now that, 'If I get it, it will be mild, it's like a cold.'"

The seven-day rolling average of newly reported infections in the U.S. has risen from about 176,000 a day just before Thanksgiving to more than 215,000 a day. It's too early to calculate how much of that increase is because of travel and gatherings over Thanksgiving, but experts believe they are a factor.

The Centers for Disease Control and Prevention says "postponing travel and staying home is the best way to protect yourself and others from COVID-19." People who insist on travel should consider getting tested for the virus before and after their trip and to limit nonessential activities for seven days after travel with a negative test result and 10 days if they don't get tested.

Rachel Watterson delayed her New Year's Eve wedding because her fiance's family can't travel to the United States from their home in Germany. Instead, the couple plans to elope and will fly from their home in Chicago to Hawaii with her parents, her brother and a friend. They picked Hawaii because of requirements that include coronavirus testing before arrival and a rapid test at the airport.

"We felt this was one of the very few safe choices we can make if we are going to travel," Watterson said.

Tim Brooks, a 37-year-old engineer in Long Beach, Calif., canceled a trip to Grand Cayman because of a ban on international visitors, then scrapped a Christmas visit to his parents in North Carolina as infections spiked in California and around the country.

"If it were just us, it wouldn't be so bad, but we have older parents and we are trying to keep them safe," Brooks said.

Airports and planes will be far less crowded this year in what is normally a high travel season. So far in December, air travel in the United States is down 67% from last year.

The nation's top four airlines now show December and January schedules that are anywhere from 33% to 46% smaller than a year earlier, according to figures from Airline Data Inc.

The short-term outlook remains grim for other travel-related businesses, including those that rely on winter tourism.

In Vermont ski country, the Trapp Family Lodge in Stowe is usually sold out during Christmas week, but only half the 96 rooms were booked by last week. It was a similar story at the nearby Lodge at Spruce Peak. Operators of both lodges blamed travel restrictions, especially quarantine requirements that are triggered by crossing state lines.

"It is frustrating as a business to basically be forbidden to do your job and to not be able to support your employees or your community," said Sam von Trapp, executive vice president of the family's lodge. "At the same time, we understand that there is very good intention behind all these restrictions."

​​​​​Information for this article was contributed by Lisa Rathke, Wilson Ring and David McHugh of The Associated Press. 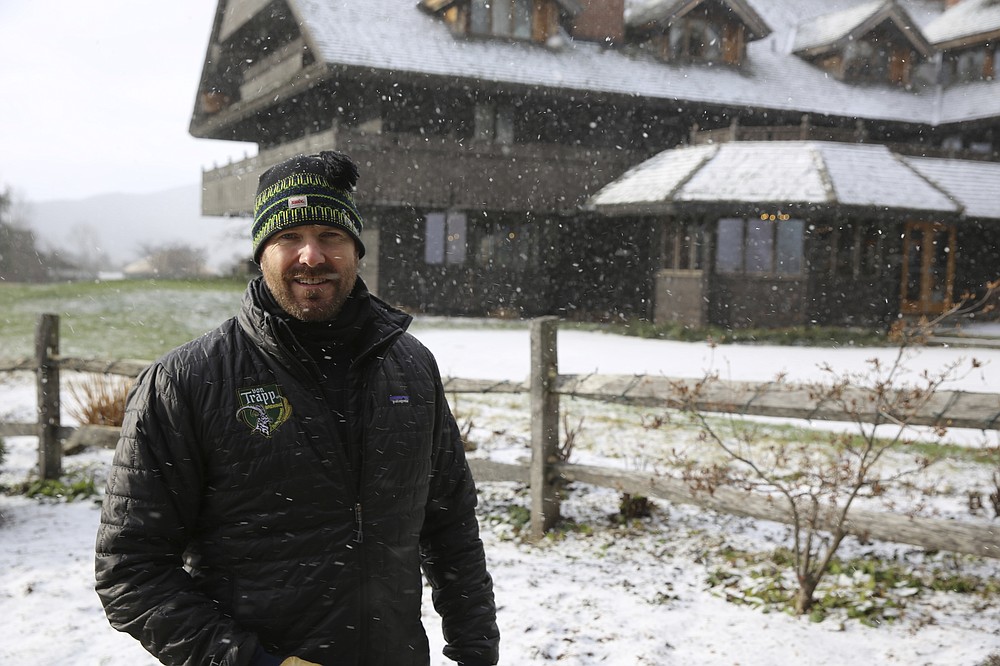 Sam von Trapp , the executive vice president of the Trapp Family Lodge poses outside the lodge on Tuesday, Dec. 15, 2020 in Stowe, Vt. Quarantine rules imposed in an attempt to stop the spread of novel coronavirus are affecting business during the normally busy holiday season. He says the rules are frustrating but be understands the need for them. He's looking forward to a time when the pandemic is over. (AP Photo/Wilson Ring) 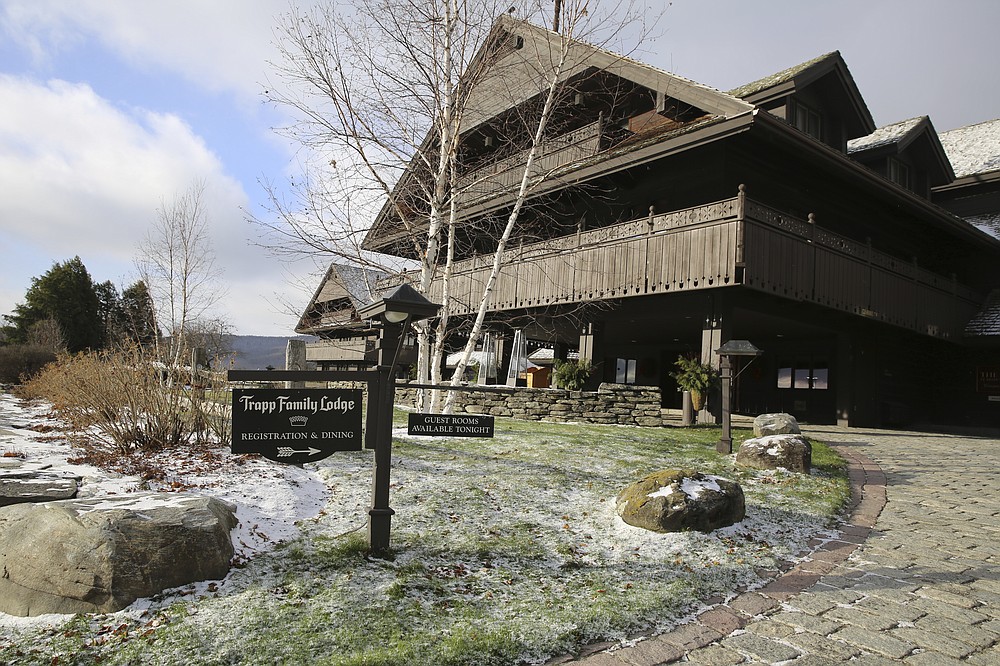 The Trapp Family Lodge is shown on Tuesday, Dec. 15, 2020 in Stowe, Vt. Quarantine rules imposed in an attempt to stop the spread of novel coronavirus are affecting business during the normally busy holiday season. He says the rules are frustrating but be understands the need for them. He's looking forward to a time when the pandemic is over. (AP Photo/Wilson Ring)
ADVERTISEMENT