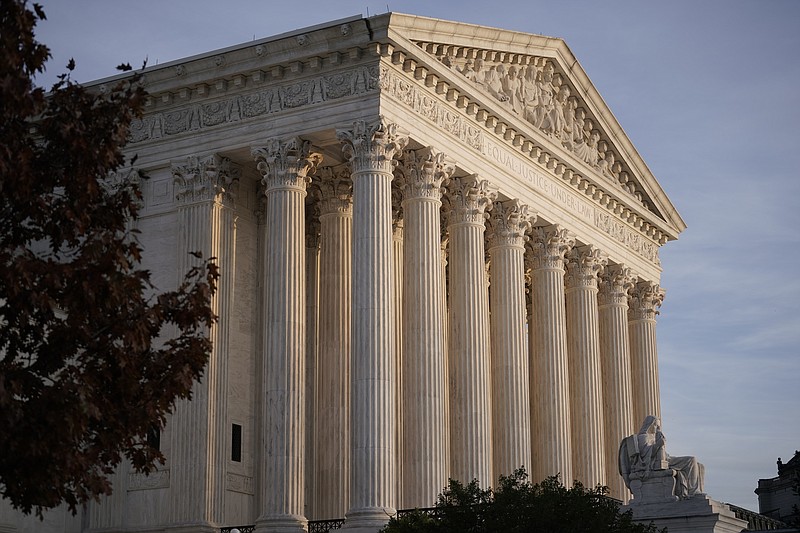 In this Nov. 5, 2020 file photo, The Supreme Court is seen in Washington. The Supreme Court has dismissed as premature a challenge to President Donald Trump's plan to exclude people living in the country illegally from the population count used to allot states seats in the House of Representatives. But the court’s decision Friday is not a final ruling on the matter and it's not clear whether Trump will receive final numbers from the Census Bureau before he leaves office next month. (AP Photo/J. Scott Applewhite)

WASHINGTON -- A divided Supreme Court has dismissed as premature a challenge to President Donald Trump's plan to exclude people living in the country without documentation from the population count used to allot states seats in the House of Representatives.

The court's decision Friday, led by its conservative justices, is not a final ruling on the matter and, while it allows Trump to pursue the plan for now, it's not clear whether he will receive final numbers from the Census Bureau before he leaves office next month.

If the president still has not received final census numbers by the time Joe Biden takes office Jan. 20, Trump's plan will be effectively dead because Biden is extremely unlikely to pursue it. It's also possible the Biden administration would take steps to try to reverse decisions made under Trump.

For now, though, the high court said it was too soon to rule on the legality of Trump's plan because it's not yet clear how many people he would seek to exclude and whether the division of House seats would be affected.

The court said in an unsigned opinion that "we express no view on the merits of the constitutional and related statutory claims presented. We hold only that they are not suitable for adjudication at this time." At least five of the court's six conservative justices had to join the opinion to make a majority on the nine-member court.

The three liberal justices dissented, saying the effort to exclude people in the country from the population for divvying up House seats is unlawful.

"I believe this Court should say so," Justice Stephen Breyer wrote, joined by Justices Elena Kagan and Sonia Sotomayor.

It's not clear that Friday's decision will have much practical effect. Documents leaked to the House committee that oversees the Census Bureau suggest the apportionment numbers won't be ready until after Jan. 20, when Trump leaves office and Biden becomes president. The Census Bureau has acknowledged the discovery of data irregularities in recent weeks that put the Dec. 31 deadline in federal law for transmitting numbers to the president in jeopardy.

Dale Ho, the American Civil Liberties Union lawyer who argued the case for the challengers, said the decision was about the timing of the case, not whether the plan complies with federal law.

"This ruling does not authorize President Trump's goal of excluding undocumented immigrants from the census count used to apportion the House of Representatives. The legal mandate is clear -- every single person counts in the census, and every single person is represented in Congress. If this policy is ever actually implemented, we'll be right back in court challenging it," Ho said.

No other president has tried to do what Trump outlined in a memo in July -- remove millions of noncitizens from the once-a-decade head count of the U.S. population that determines how many seats each state gets in the House, as well as the allocation of some federal funding.

States with large populations of people who are in the country without documentation could lose seats in the House under Trump's plan, and the president signaled in his memo that punishing states that "encourage illegal aliens" is one reason he issued it.

Meanwhile, administration opponents have raised other questions about its conduct of the census.

In a lawsuit in California that originally challenged a shortened head count by the Commerce Department, a coalition of cities, counties and advocacy groups are fighting the Trump administration for documents showing how the Census Bureau is processing the data it collected in only half the time originally planned.

The Democratic-controlled House Committee on Oversight and Reform last week subpoenaed Commerce Secretary Wilbur Ross, who oversees the Census Bureau, for documents over data anomalies found in the numbers that jeopardize the Dec. 31 deadline for turning in the apportionment numbers to the president. The committee's chairwoman, U.S. Rep. Carolyn Maloney of New York, accused Ross of withholding documents not only from Congress but the Government Accountability Office, which acts as a watchdog on the agency.

​​​​​Information for this article was contributed by Mike Schneider of The Associated Press.