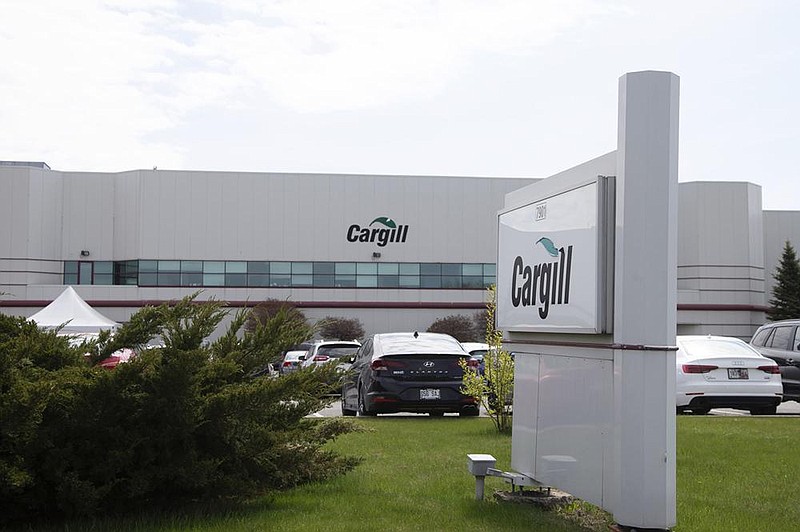 Cars sit parked outside the Cargill Inc. meat plant in Chambly, Quebec, in May. Cargill temporarily idled one of its beef plants in Ontario on Thursday after some employees tested positive for covid-19. (Bloomberg/Christinne Muschi)

Meatpackers across North America are bracing for a resurgence of coronavirus cases, trying to avoid the shutdowns that left supermarket shelves empty earlier in the pandemic.

Cargill Inc. has temporarily idled one of its beef plants in Canada after some employees tested positive. JBS, the world's top meat producer, sent thousands of vulnerable U.S. workers home on paid leave, while Sanderson Farms Inc. said it's now facing higher absenteeism at its plants than earlier in the pandemic.

Producers of everything from beef to chicken are looking to prevent the sort of disruption that shut several plants during the spring, curbing meat supplies when consumers were stocking up their fridges. Executives now say companies are better prepared, having spent millions of dollars to reconfigure factories, implement social distancing and distribute the protective equipment workers need to stay safe while keeping the food supply chain running. A labor union executive warns that efforts to keep plants running comes at a cost, with extra hours taking a physical toll on workers.

"I don't expect to see the same issues," Jon Nash, head of protein for Cargill in North America, said in an interview. "Generally speaking, our industry is better prepared to handle the challenges. We know what we are dealing with."

"We know a lot more than we ever did and I think our food supply chain is resilient to the point we will be OK," he said.

Closely held Cargill, the world's largest agricultural commodities trader, said Thursday that it was temporarily shutting down its beef processing plant in Ontario out of "an abundance of caution as our local workforce deals with the community-wide impacts of covid-19."

"This is not just a Cargill spread, but communitywide spread in Guelph," about 56 miles west of Toronto, said April Nelson, a spokeswoman for the company.

Earlier this month, JBS said it had sent more than 5,000 workers home in the U.S. since coronavirus cases began to accelerate in October. Joe Sanderson, chief executive officer of the third-largest U.S. chicken producer, said infections are rising among its workers as cases increase in Texas, Mississippi, Georgia, the Carolinas and Louisiana.

"We're still running and we're still running at our capacity, but there have been more instances of absentees now than we had all summer or back in the spring," he said at an earnings call Thursday. "It's becoming more of a challenge for us right now than it has been since this pandemic started."

The increase in cases across rural North America highlights the challenges meatpackers face in preventing the virus from entering their facilities and spreading among the workforce. More than 50,000 meatpacking workers in the U.S. have tested positive for the virus and more than 260 have died, according to data from the Food and Environment Reporting Network.

Tyson Foods spent $540 million to adapt its U.S. facilities in fiscal 2020, adding temperature scanners, workstation dividers and social distance monitors, the company said in a statement earlier this month. It's testing thousands of employees every week, including ones that don't present any symptoms, a Tyson spokesman said, adding that the company has appointed a chief medical officer and hired 200 additional nurses.

JBS invested more than $200 million in health and safety measures and over $160 million to pay higher wages, according to a company spokesman. The company has also staggered start times and breaks to promote social distancing, installed UV germicidal air sanitation and plasma bipolar ionization technologies to neutralize potential viruses in the air, and instituted temperature checks.

People are working more extra hours and Saturdays, and since the lines can't go the same speed with fewer people, what used to take about 16 hours now takes 20, according to Mark Lauritsen, director of food processing, packing and manufacturing at the United Food and Commercial Workers union, which represents 1.3 million workers in the U.S. and Canada. "All those extra hours is going to take its toll eventually," he said.

Some contracts have caps on hours, and for others, the union is pushing employers to guarantee days off to make sure the toll on their bodies is not too severe, he said.

Cargill is still running its plants in the capacity percentage range of the mid- to high 90s as it has been able to compensate for localized issues by increasing output at other facilities, Nash said. The company has also changed its product mix to adapt to the tight labor availability and a switch to serving more retailers as restaurants shut down.

Consumers may now find bigger packages at supermarkets, with ground beef being a case in point, Nash said. Cargill is also making more in-bone products, he said. JBS also said earlier this month that it was simplifying its product mix and that the more labor-intensive processing jobs such as removing bones from pork hams or beef loins had been delayed as workers focus on essential tasks.

"Could we have issues where we may have to slow down in some spots as an industry? Potentially," Nash said. "For us, if we get to a point where we can't run a part of our facility or a facility safely or with the same food safety controls in place, we will shut it down."

The U.S. meat industry wants its workers to be among the top priority for vaccines once health care workers and people in long-term care facilities get shots, the North American Meat Institute said earlier this month. Joe Sanderson has pledged to take the vaccine on video and broadcast to factories to incentivize workers to be inoculated as well.

"We're providing flu shots for everybody and we are preparing hopefully to give covid vaccinations when that becomes available, we think in March or April," Sanderson said.