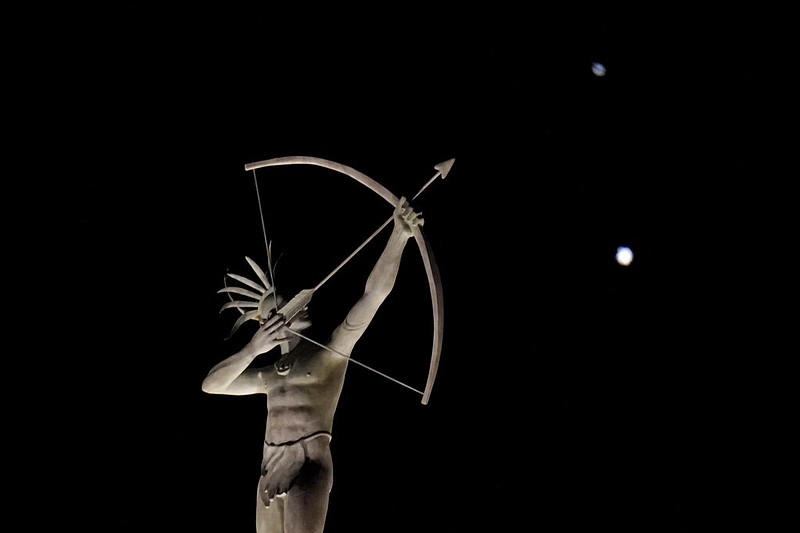 A statue of a Kansa Indian stands atop the Kansas Statehouse in Topeka as Saturn (top) and Jupiter (below) are seen Saturday, Dec. 19, 2020. The two planets are drawing closer to each other in the sky as they head toward a "great conjunction" on Monday, Dec. 21, where the two giant planets will appear a tenth of a degree apart.

The astronomical event that guided the three wise men will appear in the night sky Monday for the first time in about 800 years -- at least that is what the name of it implies.

The "Christmas Star" as some have dubbed it, is not a star but rather the conjunction of the solar system's two largest planets -- Jupiter and Saturn. The two gas giants will be the closest they have been to each other in about 400 years and will be visible for the first time in the night sky in roughly 800 years.

The planets will appear to be so close together they may look like a big, bright star in the night sky.

"It helps put the thing into perspective sometimes," said Darrell Heath, the outreach coordinator for the Central Arkansas Astronomical Society. "Just by engaging in science, it can help people think, I guess, in more critical ways than they might otherwise."

Since the conjunction is happening Dec. 21, just before Christmas, some have dubbed it the "Christmas Star." There are several theories as to what the Star of Bethlehem from the Bible was, with some believing it could have been a conjunction of two planets like the one happening this week or, perhaps, a supernova.

The planets will be at their closest on Monday, but anyone with a view of the night sky can watch the planets gradually move closer each night.

To get a look at the Christmas Star requires an unobstructed view of the southwest horizon. In Arkansas, it will be just above the horizon right after sunset around 5 p.m. Monday. The star will be visible in the sky for about an hour before it dips below the horizon.

Jupiter will appear to be the brightest "star" in the sky over the southwest horizon, and Saturn will appear next to it on the left side.

If the weather is clear, stargazers should be able to view the conjunction with the naked eye, but it will help to have binoculars or a telescope, Heath said. With a telescope, it may be possible to make out the stripes on Jupiter and Saturn's rings.

"It's interesting that you get both of these objects together in a single field of view with the eyepiece of a telescope," Heath said. "That's not something you often get -- two planets for one view."

However, Dec. 21 is not the only night the planets will be visible. Each night, the planets appear to move nearer to each other, including tonight when they will be close.

On Monday, they will be at their closest at just a tenth of a degree apart.

After Monday, the planets will gradually appear to drift apart gradually.

While being in a dark place is preferable, light pollution should not prevent viewers from seeing the "Christmas Star," as it will be one of the brightest things in the night sky.

Anyone looking to take a photo of the conjunction don't need a special camera -- a cellphone will do.

For scientists, there isn't much mystery about what will be happening in the night sky on Monday, Kennefick said, but that doesn't mean there isn't any excitement around it.

For centuries, astronomers have been able to calculate the movement of the planets and other celestial bodies. Renaissance scientists such as Johannes Kepler and Nicolaus Copernicus helped made their breakthroughs by trying to predict astronomical events like the "Christmas Star."

"So it was the impetus to try to get those right, which really, arguably, gave birth to modern science," Kennefick said.

Given the two planets' distance from the sun, it takes Jupiter about 12 years and Saturn 29 years to revolve around the Sun. The orbits of Jupiter and Saturn cross every 20 years, but this year's conjunction is the closest the planets will appear to each other in centuries.

For stargazers and scientists alike, they hope the public can take some lessons from it.

"The sky is something that we all share, and it is something that young people can see," Kennefick said. "While we can't touch it, we can see it, and it means something to us in a way that talking about other certain aspects of science can be a little alienating."