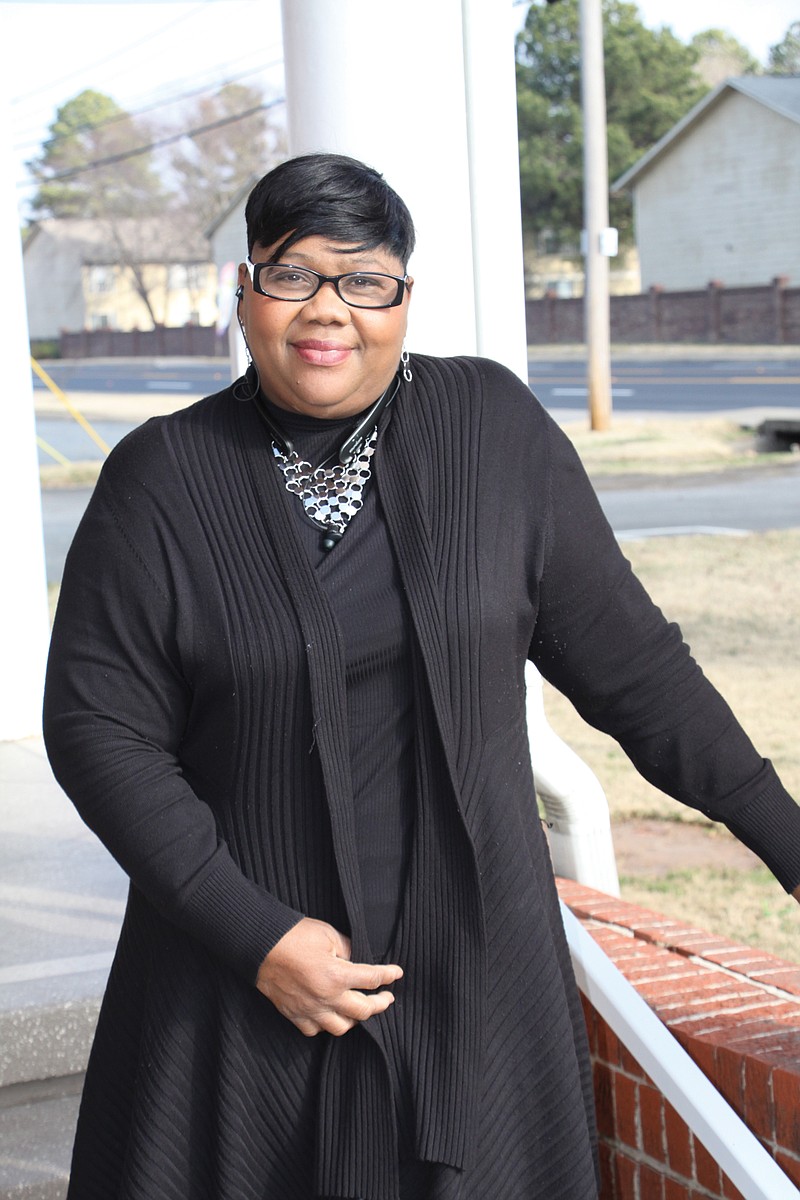 Ewonda Baker of North Little Rock stands outside St. Mark Community Church in Jacksonville, where her husband is the pastor. In November, Baker was recognized by Gov. Asa Hutchinson for quarantining with two foster children in Searcy after they had tested positive for COVID-19.

Even though all of Ewonda Baker’s children are fully grown, she said her “mom mode” has never gone away. That was never more evident than when in October, she made the immediate decision to be quarantined with two foster children at a house in Searcy.

“I am around children almost every day,” said Baker, who has worked as a program assistant for the Department of Human Services for 27 years. “Mom mode never leaves, definitely not while doing this job.”

Baker had been transporting one of the boys, age 6, to school every day. On Oct. 12, she went to the foster home to pick him up, and when he didn’t come out, she called the foster mother, who informed Baker that she and her husband had tested positive for COVID-19. The children, who aren’t related, had to be moved so the husband could receive medical attention because “he wasn’t doing well.”

The next day, Baker volunteered to care for the boys until Family Services could find a place for them. She said she put on her gloves, mask and face shield and went to the house to pick up the boys.

“I loaded them up and took them to a testing site, and they both tested positive, so there was no way for them to go anywhere, and we had to stay in the van for about two or three hours,” she said.

Eventually, Baker volunteered to reside with the two children for 14 days at a house in Searcy. She helped them with their education, cooked them meals, checked their temperatures and did whatever they needed.

“They never showed any symptoms, no cold or anything, so that was a blessing from God,” Baker said. “I stayed there and took care of them. I didn’t even think about it. Somebody needed to care for these children because I knew it would be difficult to find a caretaker for them.”

“It wasn’t something I was expecting,” Baker said. “I wasn’t looking for any recognition. I just appreciate that the governor recognized me.”

Baker said she didn’t even consult with her husband before making the decision to quarantine with the children.

“It is more than a job; it is a ministry. You have to have the heart for it, and God had put me in the right place to help these children at this particular time.”

Baker said the house was well-equipped with board games, toys and television. She said the boys would also go outside to play, so it wasn’t a big struggle keeping them entertained.

“The house was equipped with everything we needed; that was a blessing,” Baker said. “[DHS] supplied us with food and cleaning supplies, so we didn’t want for anything.”

She said the biggest issue was making sure the two boys were staying on task for their virtual schoolwork.

“That is a lot of work — to keep a 6-year-old [doing schoolwork] online,” she said. “He wants to click and do other things, like watch a movie or play games.

“I’m just so thankful they didn’t have any symptoms. It worked out well, and I’m still thankful for that.”

Baker was able to return to work on Nov. 9, and the boys are doing well in their new placement.

Rosalind Reems, who has worked with Baker since 1997, said this is just one example of how Baker has committed to assisting the foster children of Arkansas.

“She is very compassionate, caring and just an all-around loving person,” Reems said. “She puts the families and the kids first before herself in a lot of different situations.”

Reems said Baker called her when the situation occurred and immediately volunteered to stay with the boys.

“She stayed by their side the entire day — that is just the type of person she is,” Reems said. “She didn’t think twice about it.”

She said it is was amazing for Baker to be honored by the governor.

“That’s a big honor; it is just huge,” Reems said. “It is an awesome recognition.”

Reems said that when kids are placed in foster care, Baker is the first to go and shop and make sure they have everything they need for the placement to occur that night. Reems said Baker has also volunteered as Christmas coordinator for the DHS for years, making sure all the kids in the area are sponsored. She said that even while Baker was quarantined, she was still making and trying to fulfill the wish lists for the kids.

“She didn’t miss a beat,” Reems said. “I talked to her on Dec. 12, and she was delivering Christmas gifts to three different parts of the state, including Jonesboro, Brinkley and West Memphis.”

“I have always wanted to help people,” she said. “The ministry has always been my calling, and by helping families and helping children and reuniting families, it just became a perfect fit.

“It is a rewarding job. We are making a difference in people’s lives when they are at their lowest. Sometimes people just need a little encouragement to get that family on track.

“I have seen a lot of families reunite. I have seen some kids grow up and have families of their own.”

Reems said she is not Baker’s direct supervisor, but said that whenever Baker is on your team, “you know you have an awesome team.”