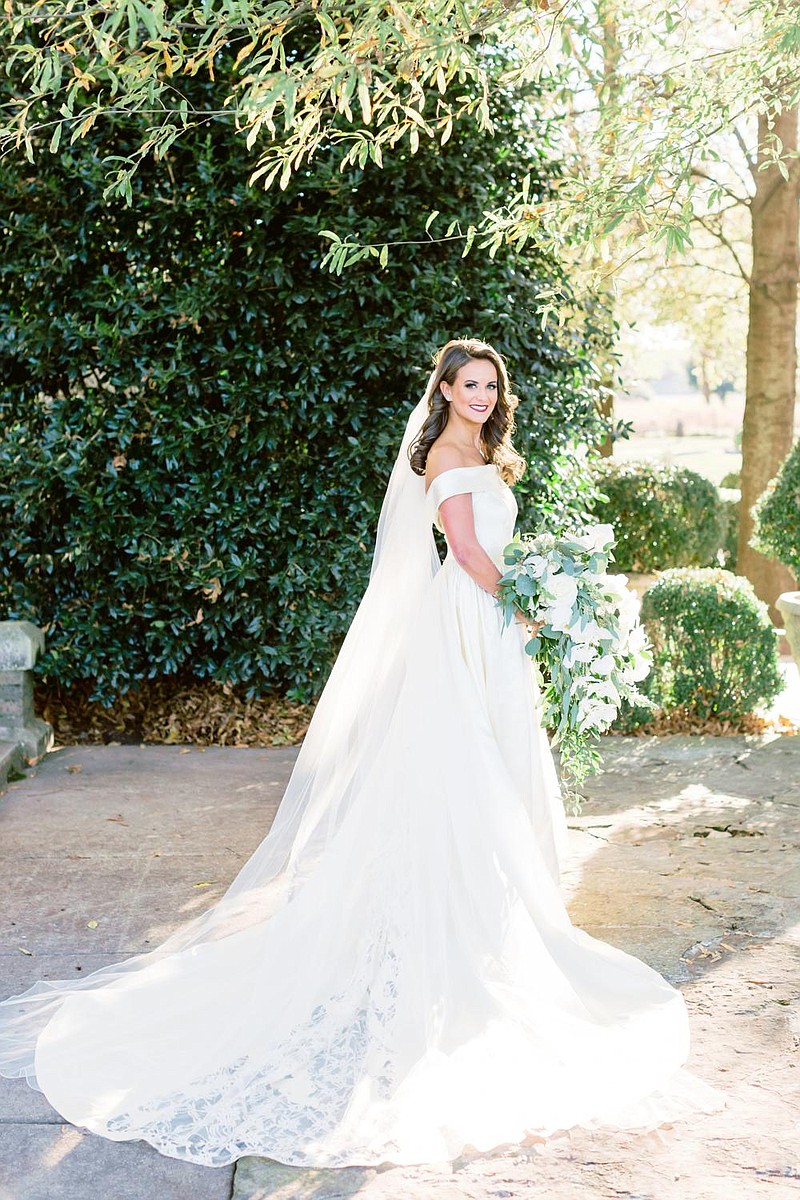 Bonnie and Michael Griffin of Little Rock are the parents of the bride. She is the granddaughter of the late Betty and Buddy Sokora and the late Shirley and Dan Griffin, all of Stuttgart.

The chancel and altar were decorated with poinsettias, lighted Christmas trees and evergreens. Music was by organist Paul Wattigny, cantor Eric McCrary and violinist Zorica Dimova.

The bride, given in marriage by her father, wore her grandmother's wedding gown of ivory satin embellished with Brussels lace and seed pearls. The Basque bodice had a modified bardot neckline and the bell-shaped skirt had lace panels, satin appliques and extended to a cathedral train. The heirloom gown was also worn by the bride's mother and godmother at their weddings. She carried a cascade of orchids, garden roses, snapdragons and spray roses.

Serving as matrons of honor were Allison Cruse of Benton and Lauren King of Dallas. Bridesmaids were Whitney Campbell, Rachel Heffington and SaraCate Moery, all of Little Rock; Megan Folden of Jonesboro, sister of the groom; Katie Howe of Bentonville; and Corinne Skarda of Hazen. Junior bridesmaid was Emilee Williams of Jonesboro, niece of the groom. They wore black gowns in the style of their choice and carried bouquets similar to the bride's.

Best man was Andrew Ford of Fayetteville. Groomsmen were Tanner Burks of Fayetteville; Kurt Folden and Jordan Carmack of Jonesboro; Andrew Griffin of Dallas, brother of the bride; Jared Landrum of Little Rock; and Kirk Porter of Paragould. Honorary groomsman was Skyler Bowlin of Horsens, Denmark. Guests were seated by Fletcher Bennett of Dallas; Justin Harris and Matt Lincoln, both of North Little Rock; and Jacob Pierce and Josh Turner, both of Paragould.

A reception was held at Astor Crowne Plaza French Quarter, New Orleans. Tables in the Grand Ballroom were covered with lace table cloths embellished with crystals and sequins. They held various centerpieces including arrangements of manzanita branches, hydrangeas and roses with hanging candles; crystal candelabra; floating candles; and vases with roses, hydrangeas, orchids and delphinium. Music was by Chinatown Band. Assisting were Anne Marie Doramus and Kelsey Friedel, both of Little Rock; Julia Pettit and Madi Wright, both of Dallas; and Muriel Reid of Spicewood, Texas.

The bride has a bachelor's degree in biology from the University of Arkansas, Fayetteville, and is a radiology manager.

The groom also has a bachelor's degree in biology from UA and has a doctorate in physical therapy from the University of Central Arkansas. He is a physical therapist.

The couple will live in Dallas after a honeymoon in Punta Cana, Dominican Republic.