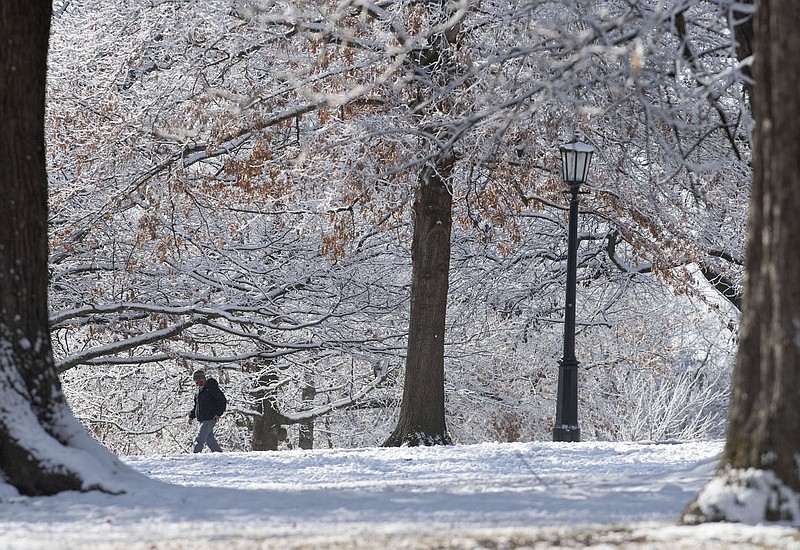 A man walks Monday across a snowy landscape on the Old Main lawn at the University of Arkansas. The National Weather Service is calling for a chance of more snow Tuesday with low temperatures in the 20s. Visit nwaonline.com/201215Daily/ and nwadg.com/photos. (NWA Democrat-Gazette/J.T. Wampler)

Northwest Arkansas is one of the most vibrant metropolitan areas in the nation, according to a nationwide study that said the area is poised for continued business development.

The Fayetteville-Springdale-Rogers corridor is an attractive region for business expansion, job creation and income generation, all of which will contribute to an expanding tax base, according to a study released last week by Heartland Forward.

"The transformation of [the region] over the past three decades is astonishing," the report notes. "It is on a path similar to what Austin and Nashville established 20 years ago, widely hailed as the top Heartland economic success stories of recent years."

Heartland, a Bentonville-based think tank, analyzed a range of metrics to rank 375 metropolitan areas across the country in the "Most Dynamic Metropolitans 2020" report. The top 30 metropolitan areas were highlighted in the study, which gave the top honor to Midland, Texas.

"Northwest Arkansas has a unique set of assets that are critical to grow a regional economy today," said Ross DeVol, president and chief executive officer of the organization.

The region has a leading research university -- the University of Arkansas, Fayetteville -- that is becoming more engaged in working with the private sector and large corporate headquarters that provide an important base for growth, according to DeVol.

The study touted the region's expertise in logistics and distribution as a strong point.

Austin has become a magnet for high-tech companies with growing ambitions.

A week ago, Oracle Corp. announced that it would move its corporate headquarters to Texas' capital city. Apple is building a $1 billion campus in the city, and Tesla has a major manufacturing plant in Austin. Tesla founder Elon Musk also said recently that he was moving from California and would make his home in Austin.

BSR Real Estate Investment Trust, a Little Rock firm that owns and manages apartment complexes, has set its sights on Northwest Arkansas as one of its key growth markets going forward.

BSR owns two apartment properties in the region, one in Fayetteville and another in Springdale, with plans to add more area complexes to its real estate portfolio.

"Northwest Arkansas is one of the fastest-growing real estate markets in the country," said Dan Oberste, BSR's president and chief investment officer. "We continue to see rapid value appreciation with our investments there and, to my knowledge, so have our peers."

Heartland Forward said its rankings are an "objective measure of the economic vibrancy of metropolitan areas across the nation," provide a glimpse of recent economic performance and highlight long-term growth opportunities and challenges.

By highlighting the region's economic-development attributes, the study provides a useful aid to complement recruitment of new and expanding industries interested in locating in Arkansas, according to Commerce Secretary Mike Preston.

"This is independent verification of what we talk about when recruiting companies," Preston said. "We can point to this and show that we're not just blowing smoke and that there are independent studies that show the value of the region. It's a huge benefit for us and our team."

Companies interested in the region do their own research and are armed with quality information when they are making a decision to relocate, according to Nelson Peacock, president and chief executive officer of the Northwest Arkansas Council based in Springdale.

Information provided by the study does complement business recruitment efforts, Peacock said. "It does help with reputation, exposure and just validation of what we're telling people about the economy and the lifestyle we have here," he said.

More importantly, though, the study can help the region identify areas that present more challenges and need attention, according to Peacock, who noted the region ranked poorly in young-firm performance.

Along with examining traditional performance measurements, Heartland researchers introduced the young-firm-performance metric, which looks at companies that have been operating for five years or less. Young-firm performance examines the ability not just to start a company but to scale it to fuel continued growth.

Fayetteville-Springdale-Rogers ranked 232nd in the category.

It's an important measurement that highlights a metropolitan area's ability to devote resources to development and growth of new companies, according to Heartland Forward.

"These companies that employ people tend to pay more and have greater ripple effects in the economy," DeVol said. "That helps with job growth over the long term. If you don't have an economy and leadership that promotes starting and growing firms, you risk not being a net-job creator."

Identifying and addressing weak spots is critical to creating future opportunities, according to Peacock. "We can see how we stack up negatively there," he added. "We are trying to address that issue."

Business leaders have been working closely with the university to encourage more entrepreneurial development and to build a supporting ecosystem for young firms.

"That's where the jobs are going to come from in the future," Peacock said. "As growth engines for the region, we're going to need more young firms to start and scale up here."

Confronting challenges is vital to creating sustainable growth, he said. "We use this to help us to get better and to identify our weaknesses to make sure the next 20 years are as good as the last 20 years have been," Peacock added.

The region's devotion to creating outdoor recreational activities with the expansion of hiking and biking trails adds important amenities that also attract attention and lead to business development, the economic development officials say.

The corridor "has become a mountain bikers haven, among other outdoor activities," the study noted.

Soft amenities are important, especially to younger employees who consider lifestyle options in deciding where they want to work and live.

"Quality of life and things like mountain biking and outdoor activities are more important now than they've ever been," Preston said. "Those activities are now in the top five things companies look at when they're making a decision about location."

Heartland Forward is a nonprofit research organization that concentrates on economic issues affecting the center of the United States, or the "heartland" of the nation. The think tank was started a year ago with seed capital provided by members of the Walton family.