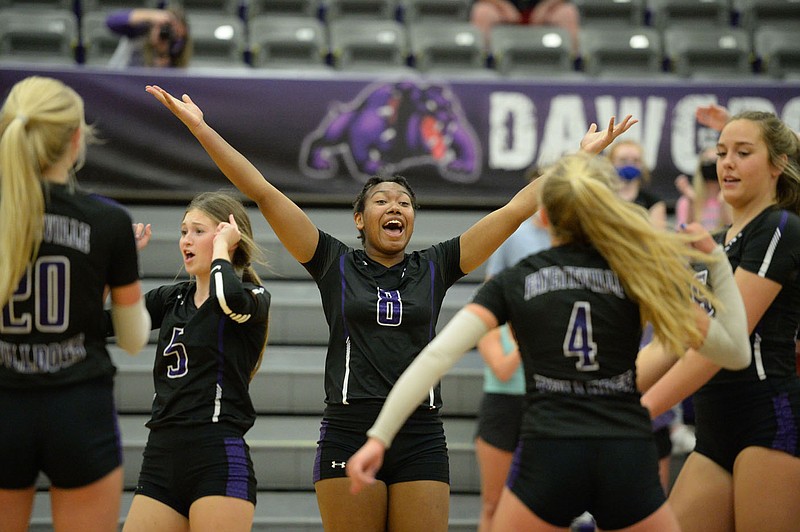 Fayetteville's Rosana Hicks (8) was a force offensively for the Lady Purple Bulldogs and helped her team claim the Class 6A state title. For her accomplsihments, Hicks has been named the All-NWADG volleyball Player of the Year. (NWA Democrat-Gazette/Andy Shupe)

Player of the Year

THE SCOOP The Central Michigan signee carried a huge amount of the offensive load for the Class 6A state champions, even more after senior outside hitter Perry Flannigan was lost to injury in the middle of the season. Hicks was virtually unstoppable in the postseason, including a season-high 31 kills in the five-set win over Springdale Har-Ber in the semifinals.

DID YOU KNOW? Hicks is a voracious reader. She owns more than 200 books, an impressive library for a 17-year-old. She calls young adult her favorite genre, but she also enjoys memoirs. If she has a spare moment between matches at a summer tournament, Hicks will normally have a book in her hand and maybe reading while simultaneously listening to music.

QUOTABLE "I think this season was absolutely amazing. It just felt like we were a team with a purpose. It hadn't felt like that the last two years, having a purpose and drive from covid-19. We didn't know if it was going to be our last game. We just played with everything we had. This season meant the world because every single girl bought into playing for each other." 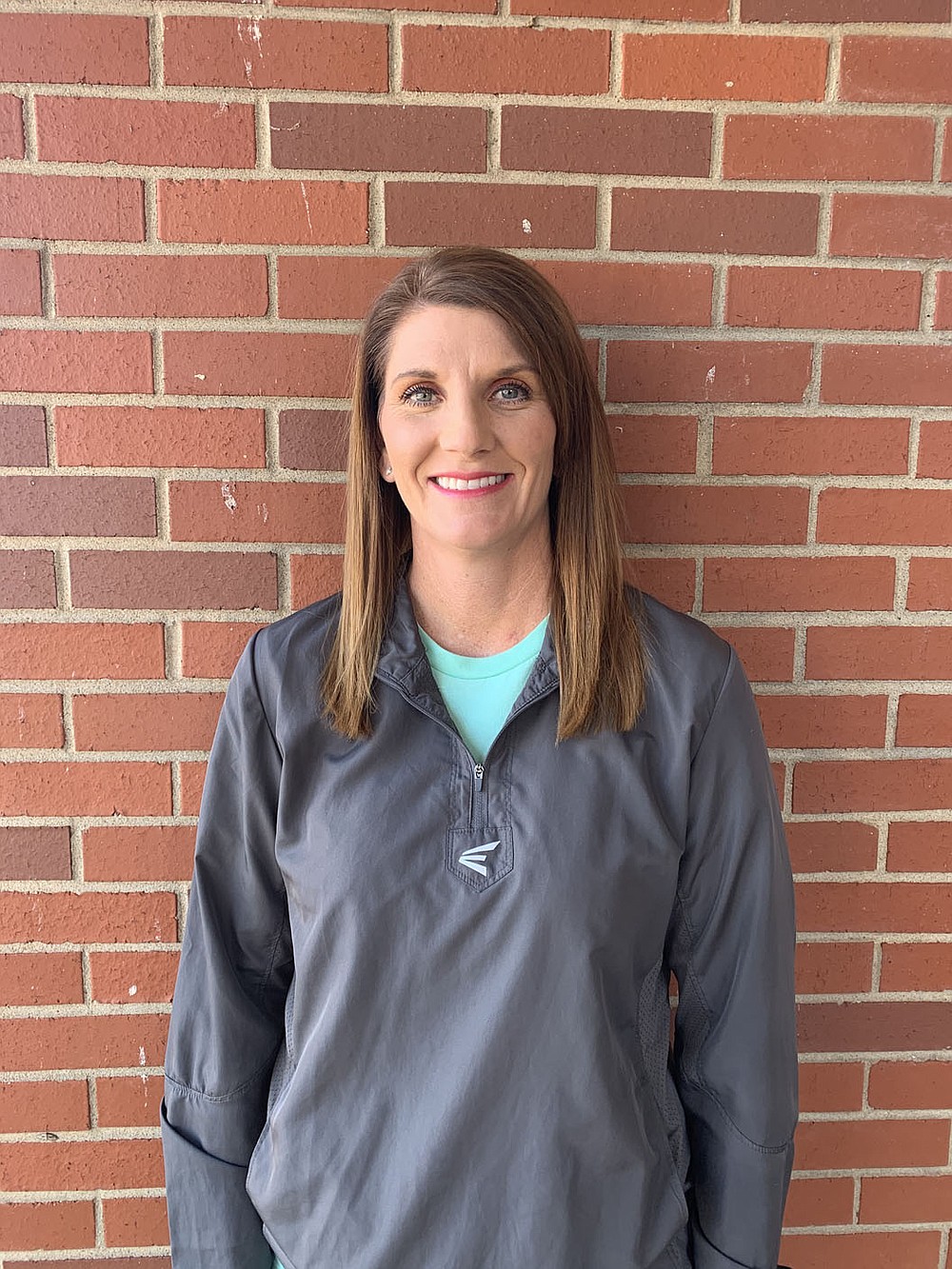 Coach of the Year

THE SCOOP Freeman, a 1997 Mansfield graduate, started the volleyball program at Hackett six years ago with a junior team then got a high school varsity program going the next season. That group of seventh-graders who started the program capped their high school volleyball careers with back-to-back state championships. Freeman led the Lady Hornets to the Class 2A title a year ago, then despite bumping up a classification this year won it in 3A as well. They finished this season 22-1 and a combined 51-3 over the two championship seasons.

DID YOU KNOW? Freeman was an all-state selection in three sports (basketball, volleyball and softball) in high school and went on to a standout volleyball career at Arkansas Tech. Her name is still in the record books at Tech in multiple categories, but she still ranks first in career hitting percentage (.325) and first in hitting percentage for a single season with an eye-popping .412 in 2000. She also earned the Gulf South Conference Commissioner's Trophy in 2001, which is the awarded annually to the student-athlete who combines outstanding performance in athletics with high academic achievement and significant community service and extracurricular activities.

QUOTABLE "Getting the job here at Hackett was a total Godsend. I thought it was crazy. Leaving Mansfield that have phenomenal girls athletics and we have three girls. I just did not understand how he was leading me to a school with no volleyball. I trusted God and he's blessed us for it. This was just an amazing group of kids. They were determined to make this their best year. It was so neat to see them progress over the six years." 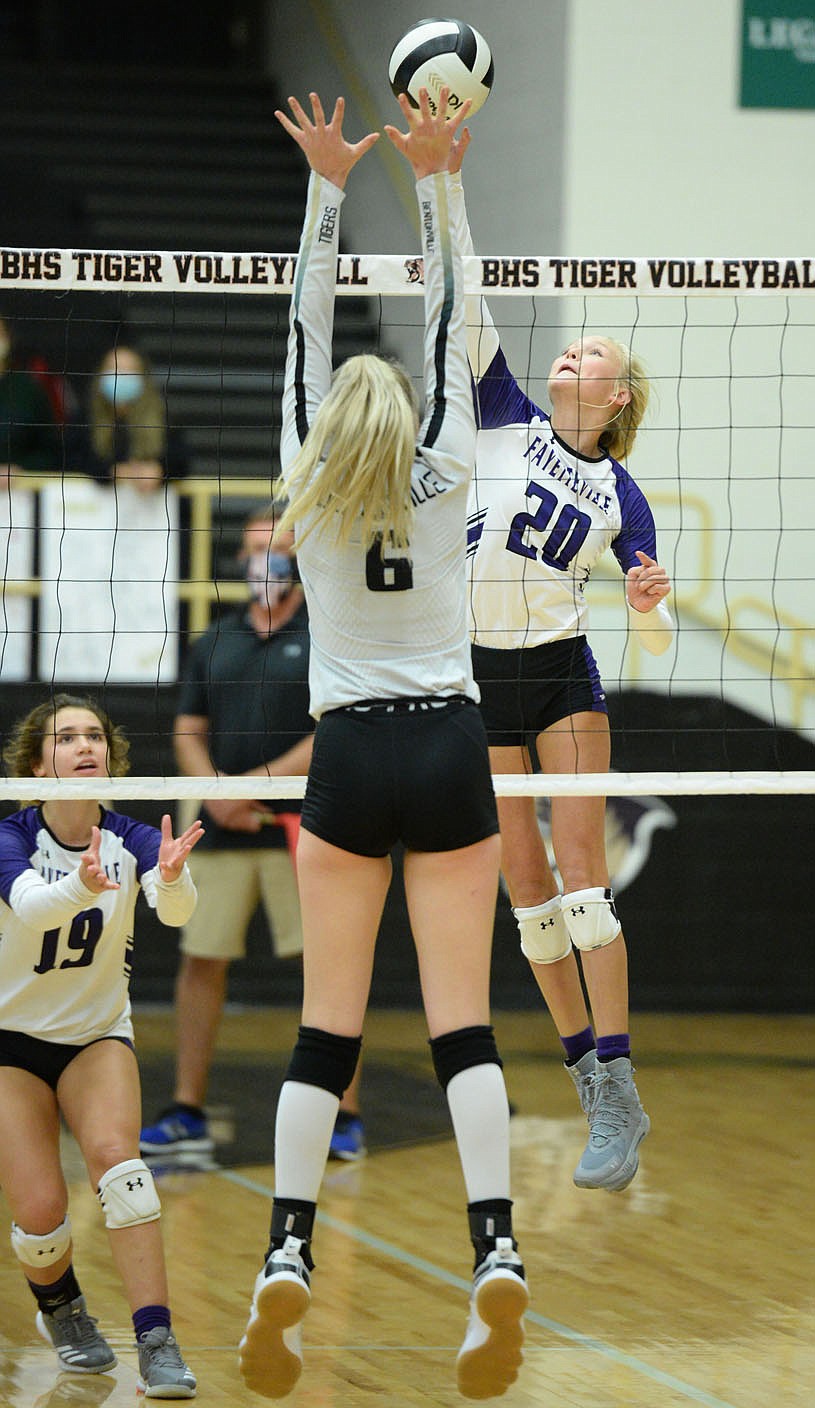 Fayetteville's Brooke Rockwell (20) stepped as a sophomore as a hitter and defender to earn All-NWADG volleyball Newcomer of the Year honors. (NWA Democrat-Gazette/Andy Shupe)

Newcomer of the Year

THE SCOOP Rockwell was honored as a member of the All Arkansas Preps Underclassmen team. ... She was a solid all-around contributor for the Class 6A state champion Lady Purple'Dogs, finishing with 230 kills, 108 digs, 29 service aces and 304 serve receptions with just nine errors. .. She also stepped up offensively as year progressed especially following the loss of senior Perry Flannigan to injury and then again when Rosana Hicks went out in the state finals. ... Rockwell finished with 18 kills and 22 digs in that state finals victory over Fort Smith Southside.

DID YOU KNOW? Rockwell's grown literally and figuratively. Two years ago, Rockwell was just 5-foot-6 and only played back row. She's now grown to more the 5-9 and touching early 10 feet. Thanks to her physical growth, she became a key offensive contributor as a sophomore this season to help Fayetteville claim the Class 6A state championship. Rockwell is also hopeful to continue what's become a family tradition of taking a ski trip to Colorado. She's been making that trip annually since age three either at Christmas or Spring Break. But covid-19 has put that streak in jeopardy, Rockwell said.

QUOTABLE "This year was a little different for me because I have always mainly been a defensive player, but I have grown so much over the last several months that I have started hitting as well. It's fun to get to play different positions. Winning the state championship was great. We had several great seniors. players and when we had two out with injuries, it even become more important to win for them."

Player of the Year

Rosana Hicks; Fayetteville; Outside Hitter; 6-1; Sr.; Named All-Arkansas Preps Player of the Year this season, three-time all-state and a four-year starter for the Lady Purple'Dogs. ... was a force offensively for the Class 6A state champion logging 280 kills (4.5 per set) with a .325 hitting percentage.

Coach of the Year

Bridget Freeman; Hackett; Led the Lady Hornets to the Class 3A state title and finished 22-1 and that gave them back-to-back titles after winning the 2A championship a year ago.

Newcomer of the Year

Brooke Rockwell; Fayetteville; Outside Hitter; 5-9; Soph.; Came up especially big after an injury sidelined a starter for the Class 6A state champions. ... Finished with 230 kills and 208 digs for the season.

Hannah Hogue; Fort Smith Southside; Setter; 5-9; Sr.; Arkansas signee who was a three-time all-state selection. ... Controlled the offense for the Class 6A state runner-up with 650 assists (9.4 per set) to go with 194 digs and 31 aces.

Avery Fitzgerald; Fort Smith Southside; Outside Hitter; 6-0; Sr.; Mississippi State signee was a force offensively for the Mavericks. ... Finished with 274 kills and hit .294 while adding 132 digs and 68 service aces to earn all-state honors for the third straight season.

Caylan Koons; Springdale Har-Ber; Setter/Outside Hitter; 5-9; Jr.; Earned all-state honors for the Class 6A state semifinalist. ... Finished with 529 assists (10.0 per set) to go with 92 digs and 27 blocks for the Central Arkansas commit.

Kat Cooper; Springdale Har-Ber; Middle Hitter; 6-2; Jr.; Was a force offensively, hitting .357 with 161 kills to earn all-state honors and lead the Lady Wildcats to the Class 6A state semifinals.

Hannah Watkins; Greenwood; Outside Hitter; 6-7; Sr.; Was an offensive force for the Lady Bulldogs, hitting an eye-popping .490 with 246 kills and 73 blocks. ... Central Arkansas signee helped lead the Greenwood to the Class 5A state title.

Trinity Hamilton; Bentonville; Outside Hitter; 5-7; Sr.; Was a dynamic all-around player to help the Lady Tigers advance to the 6A state semfinals. ... Earned all-state honors by rolling up 282 kills to go with 277 digs, 341 serve receptions and just four errors.

Jamie Myrick; Bentonville; Libero; 5-2; Sr.; Earned all-state honors and was the anchor of the Lady Tigers' defense, recording an incredible 739 digs (8.7 per set) and 556 serve receptions with just 10 errors to go with a team-high 42 service aces.

Madeline Freeman; Hackett; Setter/Outside Hitter; 5-9; Jr.; Earned state tournament MVP and all-state honors in helping the Lady Hornets to the Class 3A title. ... Filled up the state sheet to the tune of 328 assists, 205 kills, 200 digs and 71 service aces to help Hackett to a 22-1 finish.

Aleigha Johnson; Fort Smith Southside; Middle Hitter; 6-0; Sr.; Was a force in the middle for the Mavericks, hitting .422 with 150 kills and 45 blocks. ... Was a three-year starter and three-time all-conference selection.